END_OF_DOCUMENT_TOKEN_TO_BE_REPLACED

With the economy overheating, it will hardly come as a surprise that the latest Fed Beige Book – which found that the economy expanded at what the Fed absurdly called a “moderate pace” from early April to late May, at least clarifying that this was a “somewhat faster” rate than the prior reporting period – one of the top concerns was soaring costs, but nothing spooked the various Fed districts quite as much as what appears to be a shortage of everything, with district after district complaining about broken supply chains, a lack of workers, and critical commodities that just can’t be procured, all resulting in sharply higher prices, slower delivery times and all around chaos. 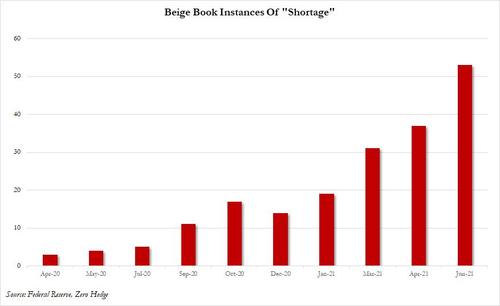