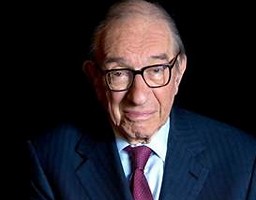 Equity bears hunting for excess in the stock market might be better off worrying about bond prices, Alan Greenspan says. That’s where the actual bubble is, and when it pops, it’ll be bad for everyone.

“By any measure, real long-term interest rates are much too low and therefore unsustainable,” the former Federal Reserve chairman said in an interview. “When they move higher they are likely to move reasonably fast. We are experiencing a bubble, not in stock prices but in bond prices. This is not discounted in the marketplace.”

While the consensus of Wall Street forecasters is still for low rates to persist, Greenspan isn’t alone in warning they will break higher quickly as the era of global central-bank monetary accommodation ends. Deutsche Bank AG’s Binky Chadha says real Treasury yields sit far below where actual growth levels suggest they should be. Tom Porcelli, chief U.S. economist at RBC Capital Markets, says it’s only a matter of time before inflationary pressures hit the bond market.

“The real problem is that when the bond-market bubble collapses, long-term interest rates will rise,” Greenspan said. “We are moving into a different phase of the economy — to a stagflation not seen since the 1970s. That is not good for asset prices.”

Stocks, in particular, will suffer with bonds, as surging real interest rates will challenge one of the few remaining valuation cases that looks more gently upon U.S. equity prices, Greenspan argues. While hardly universally accepted, the theory underpinning his view, known as the Fed Model, holds that as long as bonds are rallying faster than stocks, investors are justified in sticking with the less-inflated asset. 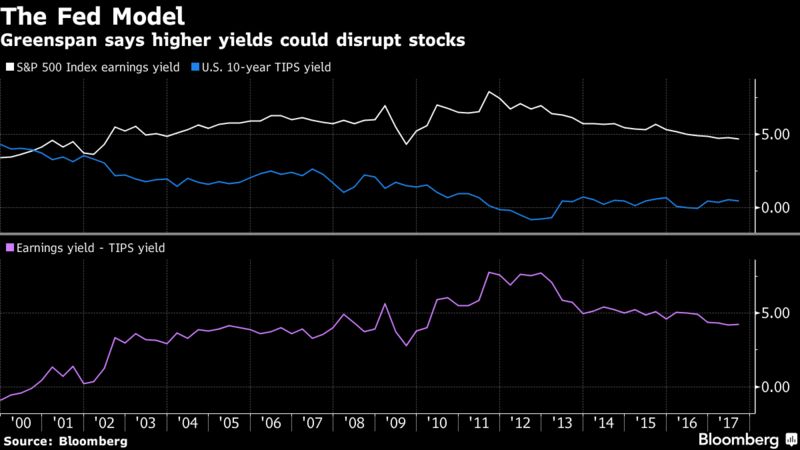 Right now, the model shows U.S. stocks at one of the most compelling levels ever relative to bonds. Using Greenspan’s reference of an inflation-adjusted measure of bond yields, the gap between the S&P 500’s earnings yield of 4.7 percent and the 10-year yield of 0.47 percent is 21 percent higher than the 20-year average. That justifies records in major equity benchmarks and P/E ratios near the highest since the financial crisis.

While persistently low inflation would imply a fair value of 2,650 on the benchmark gauge, the more likely case is a narrowing of the gap between earnings and bond yields, Kostin says. He is sticking to his estimate that the index will finish the year at 2,400, implying a drop of about 3 percent from current levels.

That’s no slam dunk, as stocks have proven resilient to bond routs so far in the eight-year bull market. While the 10-year Treasury yield has peaked above 3 percent just once in the past six years, sudden spikes in yields in 2013 and after the 2016 election didn’t slow stocks from their grind higher.

Those shocks to the bond market proved short-lived, though, as tepid U.S. growth combined with low inflation to keep real and nominal long-term yields historically low.

That era could end soon, with the Fed widely expected to announce plans for unwinding its $4.5 trillion balance sheet and central banks around the world talking about scaling back stimulus.

“The biggest mispricing in our view across asset classes is government bonds,’’ Deutsche Bank’s Chadha said in an interview. “We should start to see inflation move up in the second half of the year.”