The differential will move even more against President Trump when October non-farm payrolls are reported, the Friday before the election, as the May 2015 326k jobs comp will be a bar too high to conquer.

These are the facts, spin them as you wish.

On the eve of the midterm elections it is likely that the Democrats will be able to argue that President Obama’s economy created 500k more jobs than President Trump’s economy over a similar period.   Reality clashes with virtual reality and bombastic rhetoric.

However,  all things are never equal.  The Trump economy is running up against labor constraints with shortages breaking out almost everywhere, which is reflected in today’s 3.7 percent unemployment rate print, a 49-year low. It’s difficult to create the marginal job on this side of the inelastic labor supply curve.

Data should always be placed in the proper context.  But, hey, we are talking politics here,  and, “politics ain’t beanbag,” folks. 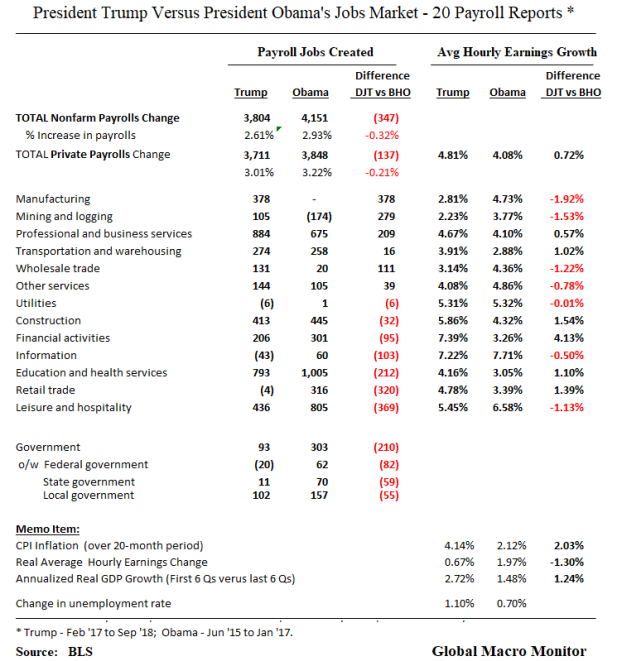 Where The Jobs Were In June: Who’s Hiring And Who Isn’t

As noted earlier, September was a hurricane-affected month for payrolls, resulting in lower than expected jobs across several categories, among which Leisure and Hospitality jobs were the hardest hit.

However, a deeper dive reveals that other industries were also severely impacted, with the 2nd worst September in contraction in Retail (-20K), Telecom (-3K), Education (-12K), Child Care (-4K) and Food Services (-23K).

This, according to Southbay Research, was remarkable because while last year’s layoffs surged 100K above trend due to 2 major Hurricanes that displaced millions and destroyed 10s of thousands of homes, with jobless claims across Texas, Florida and Puerto Rico soaring by 100K+, this year, one hurricane came but was very mild and had minimal impact, with Initial Jobless Claims rose a combined 12K. Yet somehow, “the impact was the same.”

Here’s one example: Food Services. As Southbay notes, somehow a mild storm led to layoffs at a scale only seen last year when 2 major Hurricanes shut down Puerto Rico and Florida and pummeled Texas.

Odd BLS estimates of layoffs aside, we know the following:

Looking over the past year, the following charts from Bloomberg show the industries with the highest and lowest rates of employment growth for the prior year. The latest month’s figures are highlighted.

One final observation from Southbay Research, who notes that overtime pay dropped as staffing increases.

Whatever the reason, after 1+ years of above-trend overtime, employers have turned to hiring.  Because it’s also cheaper than paying double rates for overtime. This, to Soutbay, “is another metric supporting continued hiring growth.”