China phasing out imported waste is driving California recycling rates through the floor. 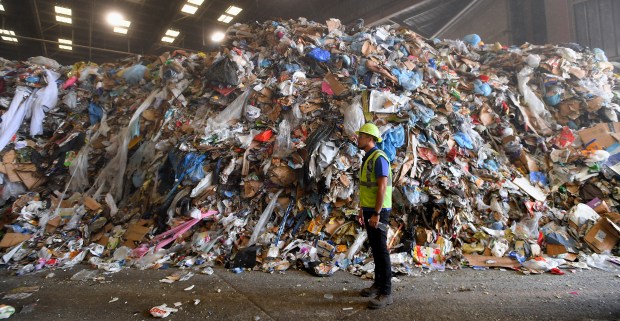 Carlos Guzman, operations manager at Republic Services, next to “The Pile” in Anaheim, CA, on Friday, May 17, 2019. The Pile is what they call the mound of recyclables waiting to be sorted. (Photo by Jeff Gritchen, Orange County Register/SCNG)

(Orange County Register) The market for recyclables is tumbling, the diversion rate of trash headed to dumps is shrinking and trash bills are going up as the cost of recycling increases.

China, long the world’s largest importer of recyclables, is at the center of the trend. With 25% or more of its imported bales estimated to be non-recyclable, China launched its National Sword initiative in 2017, setting new standards for recyclables it would accept. By 2018, it was forcing the return of any bales that weren’t 99.5% recyclable. This year, they’ve whittled down what they’ll accept to only the most valuable plastics and paper.

With China’s focus on a cleaner economy and environment, the country has announced they will stop importing all recyclables Jan. 1. Other foreign markets are following with their own restrictions. As a result, U.S. waste companies are finding themselves stuck with recyclables nobody wants.

Asgian’s recycling stations – like those of many commercial haulers and recyclers in Southern California – no longer recycle plastics Nos. 3 through 7, and have become more selective in the paper products they recycle.

“We’re throwing out more because there’s no market,” he said.

At the same time, the strong U.S. economy is fueling consumerism and more trash of all types, including debris from increased construction. That trend is cited by Asgian and other experts as the chief cause of increased flow to landfills and a contributor to the falling rate of trash being diverted from landfills for recycling and composting.

The state hit a recycling peak in 2013 and 2014, with a 50% diversion rate. But by 2017 that had shrunk to 42%, according to the latest available data from CalRecycle, the state’s recycling agency. The downward trend is expected to continue, shrinking to 38% in 2020, according to Orange County Waste & Recycling projections.

“It’s a problem and it’s a bit of an opportunity,” said Nick Lapis of Californians Against Waste. “If we create markets domestically, there are job opportunities and environmental opportunities. A lot that we were sending overseas wasn’t recyclable and wasn’t being handled in the most environmental way anyway, so recycling has been artificially inexpensive.”

Those plastics brought waste haulers $20 a ton in the first quarter of 2017. But a year later, they cost haulers nearly $11 a ton to get rid of, according to CalRecycle. Over the same time, the price for unsorted mixed paper fell from $99 a ton to $15 a ton while corrugated cardboard fell from $143 a ton to $91 a ton. Even the plastics that are most commonly recycled, Nos. 1 and 2, fell slightly in value. Those include soft drink bottles, milk and detergent jugs and shampoo bottles.

Overall, Waste Management reported recycling commodity prices were 28% lower in the first quarter of 2019 than in the same period the previous year.

Besides getting less for recyclables, haulers are facing new costs associated with the processing that trash. Items they decide not to recycle, like plastics Nos. 3 through 7, result in additional landfill costs. And while overseas markets used to accept bales that included dirty or unrecyclable trash, current domestic and foreign standards require that more time — and labor — be spent sorting out items that won’t be recycled.

The repercussions are beginning to show up on garbage bills.

Single-family homes in the city of Riverside, for instance, had seen annual increases each of the last three years of less than 50 cents per month. This year, increased recycling costs are helping push the increase to $3.17, to a monthly total of $26.85 beginning July 1. Single-family homes in unincorporated Riverside County could see a $1.05 hike to cover increased recycling costs if the Board of Supervisors approves the proposal Tuesday, May 21. That would bring the monthly billing range to $23.04 -$25.70.

Private haulers also are seeking rate hikes in the cities where they operate. Republic Services, which sent 32% of its recyclables to China two years ago but now sends less than 1% there, has recycling agreements with 1,100 local jurisdictions.

“We’ve had eyeball conversations about this with every one of them,” said Pete Keller, Republic’s vice president of recycling and sustainability. The company has trash collection accounts in Orange, Los Angeles and San Bernardino counties.

Haulers are also looking at ways to meet increased recycling costs beside rate hikes, such as decreasing the frequency of pickups, Keller said. And they’re working to better inform residential customers what should and shouldn’t go into recycle bins in an effort to reduce sorting costs.

Anywhere from 20% to 35% of what ends up in bins is not recyclable.

Diapers and food waste, for example, are not recyclable. Most haulers are also unable to recycle plastic foam or any paper product with a plastic lining, which includes virtually all disposable beverage cups. A recent tour of Republic’s recycling center in Anaheim found everything from car bumpers to strollers being sorted out of the recycling stream  Additionally, recyclable goods that are soiled typically end up in the landfill.

A lot of the errant items in the bins are the result of “wish recycling.”

Lapis of Californians Against Waste said, “People think, ‘This product really should be recyclable.’

California’s plastic-bag ban was upheld by voters in 2016 and a statewide restriction on plastic straws was approved last year. While cities and counties are increasingly establishing their own, stricter guidelines on single-use plastics, the Legislature this year is considering upping the statewide ante with parallel bills, SB 54 and AB 1080, that would require 75% of single-use plastic waste be reduced by 2030 through phasing out use, recycling or composting.

Less than 15 percent of single-use plastics in the state currently are recycled, according to Sen. Ben Allen, D-Santa Monica, the sponsor of SB 54.

Lawmakers are also looking at ways to stimulate the market for recycled plastic, paper and cardboard.

“China had better prices than domestic recycling so our domestic recycling reuse didn’t fully develop,” CalRecycle’s Lance Klug said. “Looking forward, exports are not the answer. And that’s good for us long term because we’ll develop our own markets.”

Future legislation could further limit the types of products and packaging that can be sold.

“California is really going to have to determine what kind of products it allows into our state,” Klug said.

Dan Jacobson, a Sacramento lobbyist for Environment California, said behavior needs to change when it comes to things like food packaging, throwaway containers and plastic utensils.

“We’re producing too much single-use trash,” he said. “We’re using it for minutes, literally, and then throwing it out. And we’re running out of places to put it.”