China’s true pace of economic growth is always hard to decipher, but the country’s lagging diesel demand could be a sign that the world’s second-largest economy is in a much more dire state than official numbers indicate.

Diesel demand in China fell 14% and 19% in March and April, respectively, reaching levels not seen in a decade, according to data compiled by Wells Fargo. Monthly demand has also been falling every month since December 2017, the data shows. 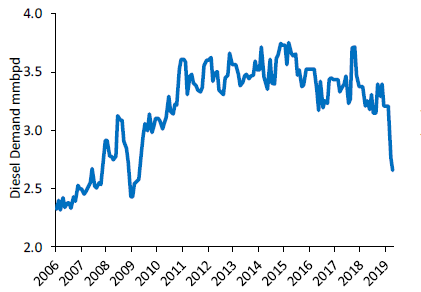 “We believe the accelerating decline is most likely tied to economic factors and the effects of the tariff ‘war’ with the U.S. (lifted demand earlier in 2019 to ‘beat’ the tariffs, but now falling),” Wells Fargo energy analyst Roger Read said in a note Monday. “If one wants to worry, that is where to focus most closely in our view.”

China said in April its economy grew by 6.4% in the first quarter of 2019. However, global investors and economists have been skeptical of China’s official economic figures for years as they believe they are overstated.

This skepticism has led analysts to use other ways to measure economic growth in China, including demand for diesel fuel and electricity. Diesel is largely used to fuel trucks that transport goods. Declining diesel demand is seen as signal of slowing economic growth as it could indicate fewer trucks are being used, hence fewer goods are being bought and sold.

China’s massive drop in diesel demand comes as it wages a trade war against the U.S.

Crude prices, for example, posted their worst weekly performance of 2019 last week and are down more than 7% this month. The S&P 500 is down more than 4% in May while the Shanghai Composite has lost 5.5%.

Neither side is showing signs of backing down, either. President Donald Trump said Monday the U.S. was not ready to make a deal with China. Meanwhile, a commentary in Chinese state-run newspaper Xinhua indicated China would not give into U.S. demands to change its state-run economy.

These tensions could shave off between 0.3% and 0.4% from China’s economic growth, according to UBS analyst Anna Ho. The analyst also said in a note: “Open economies, like Singapore, Korea and Malaysia are more sensitive to global trade and higher export exposure, and could see a reduced chance of growth recovery in 2H19.”

In another sign of tension between the two countries and perhaps declining economic activity, Chinese tourism to the U.S. fell for the first time in 15 years last year, according to the National Travel and Tourism Office.