A darkening outlook for China’s economy continues to materialize week by week.

New data from commercial property group CBRE warns the country’s office vacancy rate has just surged to the highest since the financial crisis of 2007–2008, first reported by Bloomberg.

CBRE said the vacancy rate for commercial office space in 17 major cities rose to 21.5% in 3Q19, a level not seen since the global economy was melting down in 2008.

Sam Xie, CBRE’s head of research in China, said the recent “spike” in vacancies is one of the worst since the last financial crisis.

Catherine Chen, Cushman & Wakefield’s head of research for Greater China, told Financial Times that soaring commercial office vacancies in China was mainly due to dwindling demand, but not oversupplied conditions.

Henry Chin, head of research for Asia Pacific at CBRE, told Financial Times that macroeconomic headwinds relating to the trade war between the US and China were also a significant factor in rising office vacancies.

As shown in the Bloomberg chart below, using CBRE data, Shanghai and Shenzhen had the highest office vacancies than any other city, and both had around 20% of office spaces dormant. 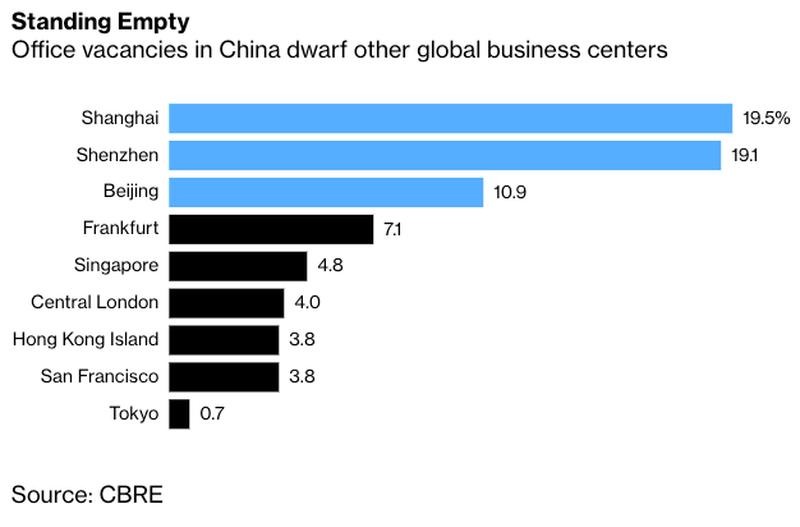 And with the global economy in a synchronized slowdown, global growth estimates are now printing at 3%, the slowest pace since the financial crisis. The Chinese economy will likely continue to slow, and could see domestic growth under 6% this year. This suggests that China’s office space vacancies will continue to rise through year-end.Office Vacancies In China Hit Decade High Amid Economic Turmoil