On Wednesday, the Fed cut rates for the third time this year, which was widely expected by the market.

What was not expected was the following statement.

“I think we would need to see a really significant move up in inflation that’s persistent before we even consider raising rates to address inflation concerns.”
– Jerome Powell 10/30/2019

The statement did not receive a lot of notoriety from the press, but this was the single most important statement from Federal Reserve Chairman Jerome Powell so far. In fact, we cannot remember a time in the last 30 years when a Fed Chairman has so clearly articulated such a strong desire for more inflation.

Why do we say that? Let’s dissect the bolded words in the quote for further clarification.

We are stunned by the choice of words Powell used to describe the Fed’s view on inflation. We are even more shocked that the markets or media are not making more of it.

Maybe, they are failing to focus on the three bolded sections. In fact, what they probably think they heard was: I think we would need to see a move up in inflation before we consider raising rates to address inflation concerns. Such a statement would have been more in line with traditional “Fed-speak.”

There is an other far more insidious message in Chairman Powell’s statement which should not be dismissed.

The Fed just acknowledged they are caught in a “liquidity trap.”

What Is A Liquidity Trap

Here is the definition:

“A liquidity trap is a situation described in Keynesian economics in which injections of cash into the private banking system by a central bank fail to lower interest rates and hence fail to stimulate economic growth. A liquidity trap is caused when people hoard cash because they expect an adverse event such as deflation, insufficient aggregate demand, or war. Signature characteristics of a liquidity trap are short-term interest rates that are near zero and fluctuations in the monetary base that fail to translate into fluctuations in general price levels.”

Let’s take a moment to analyze that definition by breaking it down into its overriding assumptions.

The chart below shows the increase in the Federal Reserve’s balance sheet, since they are the “buyer” of bonds, which in turn increases the excess reserve accounts of the major banks, as compared to the 10-year Treasury rate. 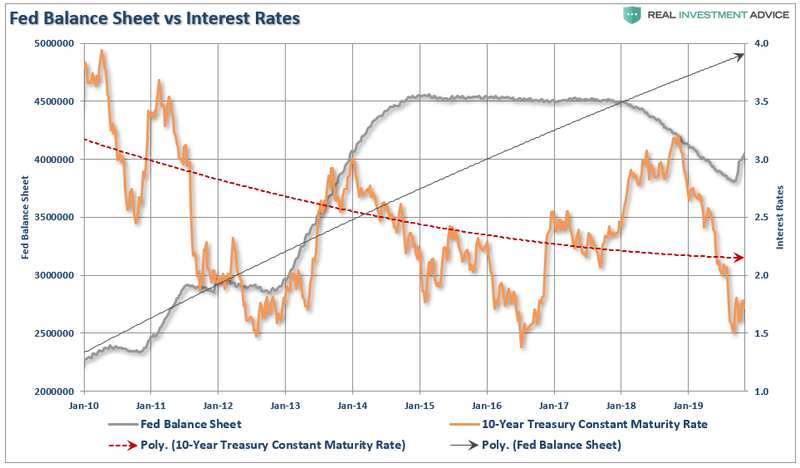 Of course, that money didn’t flow into the U.S. economy, it went into financial assets. With the markets having absorbed the current levels of accommodation, it is not surprising to see the markets demanding more, (The chart below compares the deviation between the S&P 500 and the Fed’s balance sheet. That deviation is the highest on record.)

While, in the Fed’s defense, it may be clear the Fed’s monetary interventions have suppressed interest rates, I would argue their liquidity-driven inducements have not done much to support durable economic growth. Interest rates have not been falling just since the monetary interventions began – it began four decades ago as the economy began a shift to consumer credit leveraged service society.  The chart below shows the correlation between the decline of GDP, Interest Rates, Savings, and Inflation. 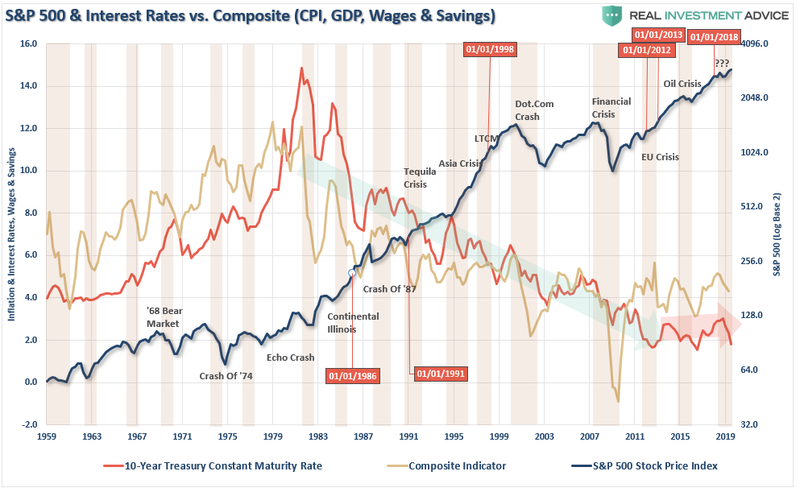 In reality, the ongoing decline in economic activity has been the result of declining productivity, stagnant wage growth, demographic trends, and massive surges in consumer, corporate and, government debt. 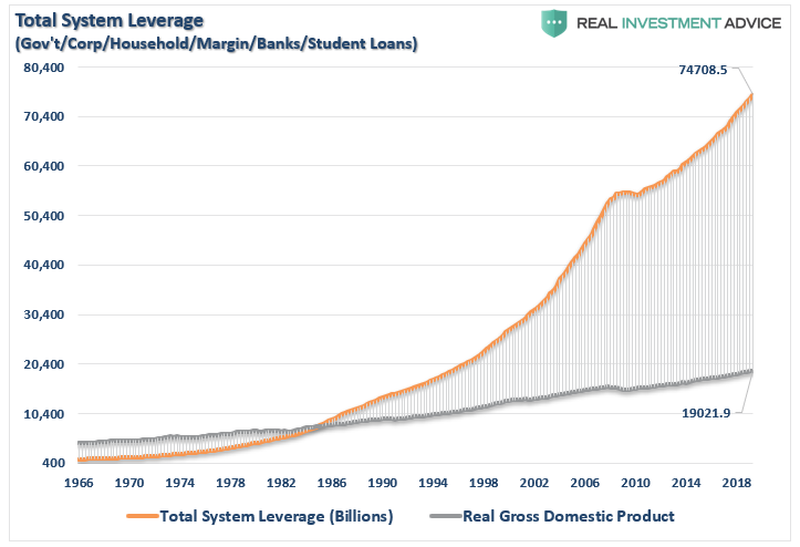 For these reasons, it is difficult to attribute much of the decline in interest rates and inflation to monetary policies when the long term trend was clearly intact long before these programs began.

While an argument can be made that the early initial rounds of QE contributed to the bounce in economic activity, there were several other more important supports during the latest economic cycle.

The Fed’s interventions from 2010 forward, as the Fed became “the only game in town,” seems to have had little effect other than a massive inflation in asset prices. The evidence suggests the Federal Reserve has been experiencing a diminishing rate of return from their monetary policies.

Welcome To The U.S. Of Japan

The Federal Reserve is caught in the same “liquidity trap” that has been the history of Japan for the last three decades. With an aging demographic, which will continue to strain the financial system, increasing levels of indebtedness, and unproductive fiscal policy to combat the issues restraining economic growth, it is unlikely monetary interventions will do anything other than simply continuing the boom/bust cycles in financial assets.

The chart below shows the 10-year Japanese Government Bond yield as compared to their quarterly economic growth rates and the BOJ’s balance sheet. Low interest rates, and massive QE programs, have failed to spur sustainable economic activity over the last 20 years. Currently, 2, 5, and 10 year Japanese Government Bonds all have negative real yields.

The reason you know the Fed is caught in a “liquidity trap” is because they are being forced to lower rates due to economic weakness.

It is the only “trick” they know.

Unfortunately, such action will likely have little, or no effect, this time due to the current stage of the economic cycle.

If interest rates rise sharply, it is effectively “game over” as borrowing costs surge, deficits balloon, housing falls, revenues weaken and consumer demand wanes. It is the worst thing that can happen to an economy that is currently remaining on life support.

The U.S., like Japan, is clearly caught in an on-going “liquidity trap”  where maintaining ultra-low interest rates are the key to sustaining an economic pulse. The unintended consequence of such actions, as we are witnessing in the U.S. currently, is the ongoing battle with deflationary pressures. The lower interest rates go – the less economic return that can be generated. An ultra-low interest rate environment, contrary to mainstream thought, has a negative impact on making productive investments and risk begins to outweigh the potential return.

Most importantly, while there are many calling for an end of the “Great Bond Bull Market,” this is unlikely the case. As shown in the chart below, interest rates are relative globally. Rates can’t rise in one country while a majority of economies are pushing negative rates. As has been the case over the last 30-years, as goes Japan, so goes the U.S.

Simply pulling forward future consumption through monetary policy continues to leave an ever-growing void in the future that must be filled. Eventually, the void will be too great to fill.

But hey, let’s just keep doing the same thing over and over again, which hasn’t worked for anyone as of yet, and continue to hope for a different result.

What’s the worst that could happen?