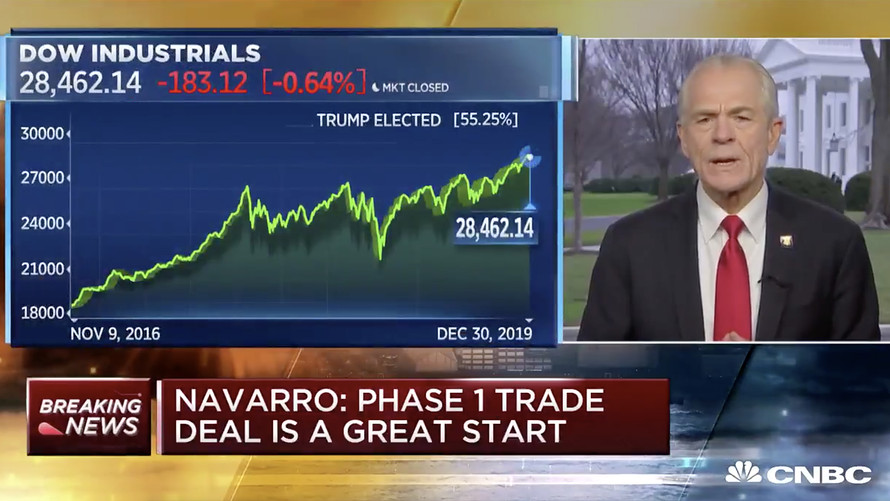 (by Mark Decambre / MarketWatch) President Donald Trump’s trade adviser Peter Navarro is calling for a roughly 13% gain by the Dow Jones Industrial Average DJIA, +0.27% in 2020, and on Monday described a long-awaited “Phase 1” trade deal as “in the bank.”

Speaking on CNBC on Tuesday, Navarro forecast another period of buoyancy for equity benchmarks and the U.S. economy, with a prediction that diminishing tensions between China and the U.S. over international trade policy will give way to another powerful uptrend for stocks. (Check out a clip of Navarro’s comments below):

Navarro’s comments made on the last trading session of 2019, came before President Donald Trump tweeted that a partial Sino-American trade resolution was set to be signed on Jan. 15. The president also said that he planned to travel to Beijing to start negotiations on the second phase of negotiations thereafter.

I will be signing our very large and comprehensive Phase One Trade Deal with China on January 15. The ceremony will take place at the White House. High level representatives of China will be present. At a later date I will be going to Beijing where talks will begin on Phase Two!

Softening tensions over import tariffs between Beijing and Washington have at least partly helped to lift U.S. stocks to their biggest annual gains in years. The Dow looked set to close out a banner year with a two-session skid but has advanced 21.8% this year to trade at around 28,410, picking up more than 5,000 points during the calendar year. Navarro’s forecast, atypical of a government trade negotiator, of a further 13% rise in the Dow to 32,000 in 2020 from currently levels would represent the equivalent of about a 3,600-point gain.

Broadly speaking, stock indexes have enjoyed a bumper year, notably in the past few months of 2019, with reports of an imminent detente on trade.

This year’s gains followed a fall of 4.2% in the S&P 500 index on a total-return basis in 2018, though, so in aggregate there has been just a 12% compounded return over the last 2 years, Datatrek’s Nicholas Colas noted. That is not far off the average 50-year S&P return of 11.1%.

President Trump and his administration have been fixated on the performance of the stock market because they see it as a potential calling card for a second term in the White House after the 2020 elections.

Indeed, this isn’t the first time Navarro has made a forecast about the Dow.

Back in July on CNBC, Navarro said talks between Washington and Beijing were heading in a “very good direction” following a meeting between Trump and Chinese President Xi Jinping at the G-20 summit in Osaka.

At that point, about five months ago, he said that the 30,000 level for the Dow was achievable if Congress approved the U.S.-Mexico-Canada Agreement and the Federal Reserve lowered interest rates.

To be sure, investors harbor major concerns heading into next year that markets may not have room for further gains, particularly as investors worry that the China-U.S. trade pact may not yield substantive changes.