There was a period of about two months when some of the more confused, Fed sycophantic elements, would parrot everything Powell would say regarding the recently launched $60 billion in monthly purchases of T-Bills, and which according to this rather vocal, if always wrong, sub-segment of financial experts, did not constitute QE. Perhaps one can’t really blame them: after all, unable to think for themselves, they merely repeated what Powell said, namely that

“growth of our balance sheet for reserve management purposes should in no way be confused with the large-scale asset purchase programs that we deployed after the financial crisis. Neither the recent technical issues nor the purchases of Treasury bills we are contemplating to resolve them should materially affect the stance of monetary policy. In no sense, is this QE.“

As it turned out, it was QE from the perspective of the market, which saw the Fed boosting its balance sheet by $60BN per month, and together with another $20BN or so in TSY and MBS maturity reinvestments, as well as tens of billions in overnight and term repos, and soared roughly around the time the Fed announced “not QE.” 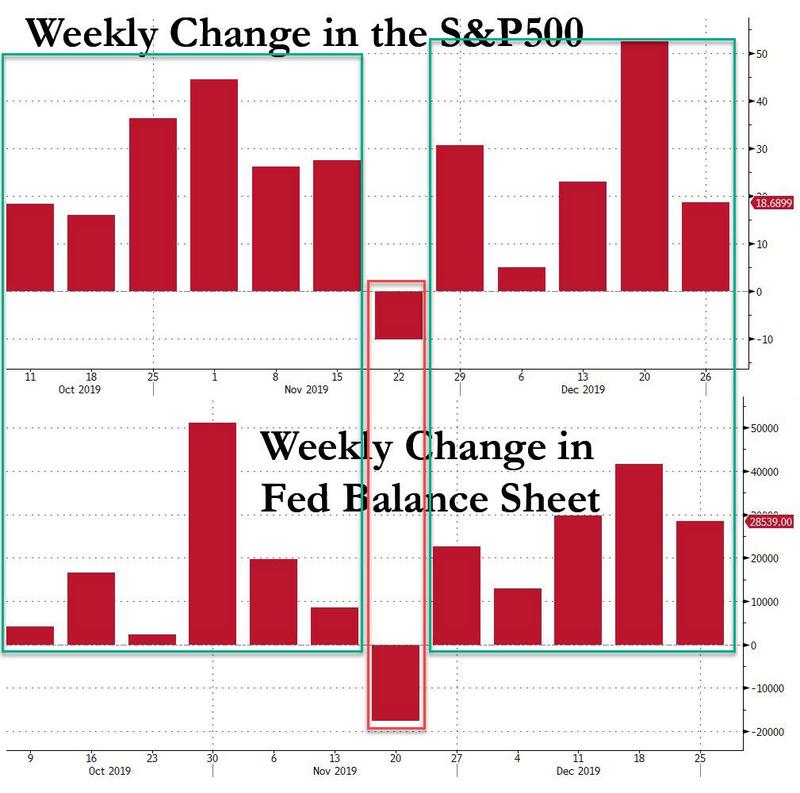 The result of this unprecedented correlation between the market’s response to the Fed’s actions – and the Fed’s growing balance sheet – has meant that it gradually became impossible to deny that what the Fed is doing is no longer QE. It started with Bank of America in mid-November (as described in “One Bank Finally Admits The Fed’s “NOT QE” Is Indeed QE… And Could Lead To Financial Collapse“), and then after several other banks also joined in, and even Fed fanboy David Zervos admitted on CNBC that the Fed is indeed doing QE, the tipping point finally arrived, and it was no longer blasphemy (or tinfoil hat conspiracy theory) to call out the naked emperor, and overnight none other than Deutsche Bank joined the “truther” chorus, when in a report by the bank’s chief economist Torsten Slok, he writes what we pointed out several weeks back, namely that

Not that DB has absolutely no qualms about calling what the Fed is doing QE4 for the simple reason that… it is QE4. 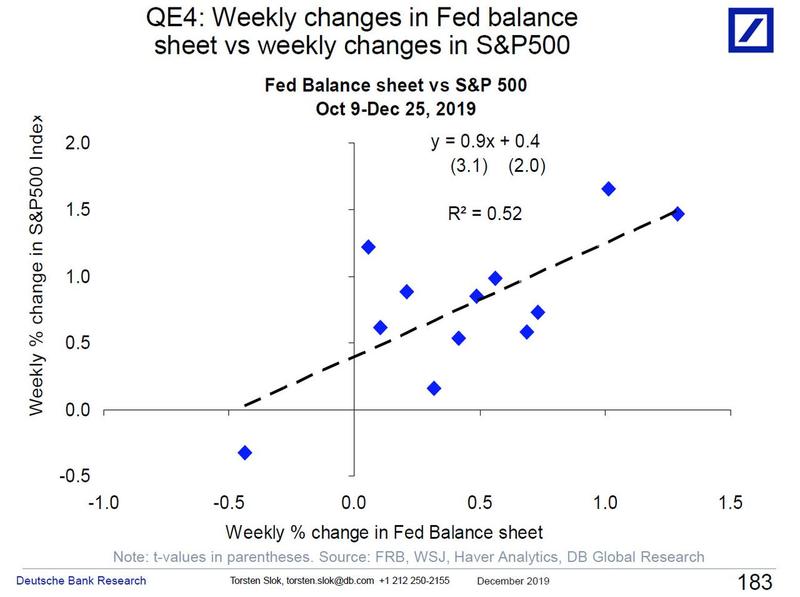 And just to underscore this point, the strategist points out that such a finding is “consistent with this new working paper, which finds that QE boosts stock markets even when controlling for improving macro fundamentals.” Which, of course, is hardly rocket science – after all when you inject hundreds of billions into the market in months, and this money can’t enter the economy, it will enter the market. The result: the S&P trading at an all time high in a year in which corporate profits actually decreased and the entire rise in the stock market was due to multiple expansion.

In short: the Kool Aid is flowing, the party is in full force and everyone has to dance, because the Fed will continue to perform QE4 at least until Q2 2020. Which reminds us of what we wrote last week, namely that another big bank, Morgan Stanley, has already seen through the current melt up phase, and predicts the “Melt-Up Lasting Until April, After Which Markets Will “Confront A World With No Fed Support“.”