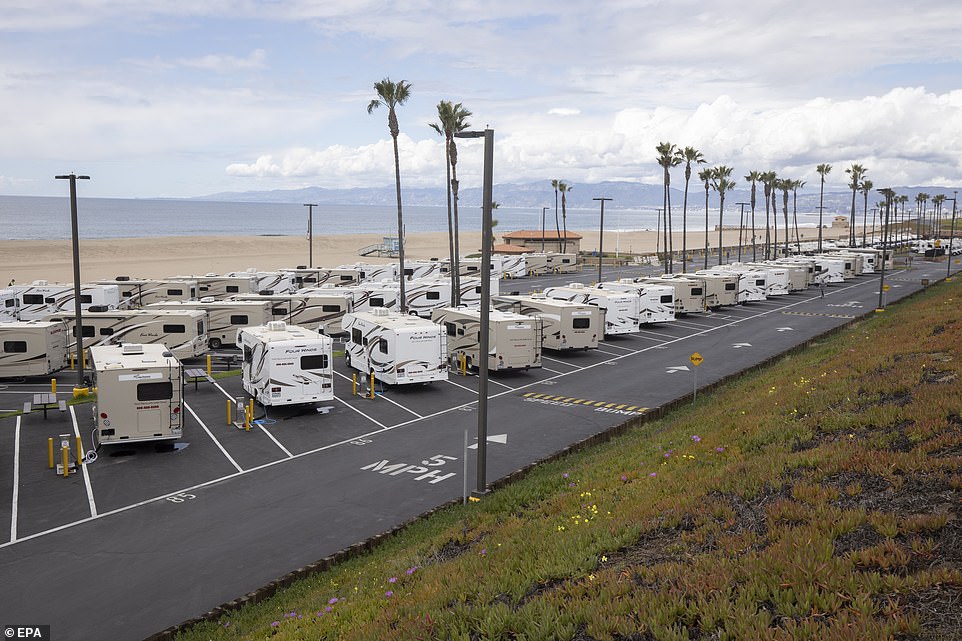 Holidaymakers have been asked to leave and others warned to avoid the area surrounding Dockweiler Beech RV site (pictured) in the city of El Segundo, California, amid preparation for the growing Coronavirus pandemic

Los Angeles’ homeless population could find themselves self-isolating inside a beachside RV in the coming months – as California frees up hundreds of motorhomes and hotel rooms for those in need.

Holidaymakers have been asked to leave and others warned to avoid the area surrounding Dockweiler Beech RV site in the city of El Segundo, California, amid preparation for the growing Coronavirus pandemic.

Hand washing stations have popped up in Los Angeles and San Francisco around large homeless populations and Governor Gavin Newsom revealed the state is acquiring around 900 hotels with tens of thousands of rooms to be converted for the use of both hospital patients and the homeless.

In the next few weeks, dozens of camper vans parked along the beach front are expected to become home to vagrants ordered into quarantine.

California boasts a homeless population of more than 100,000 and with no way for them to wash their hands or maintain hygiene, it was a highly at-risk group – diseases already run rife with central LA’s Skid Row recently seeing outbreaks of typhus and Hepatitis A.

At least 400 people have tested positive for the virus in the state so far, but numbers are rising and many more are yet to be tested.

Those who used to live at the RV park were handed a notice last Friday, according to Fox News 11, to tell them their reservations were being canceled ‘due to the need for emergency shelter related to the COVID-19 virus’.

A Los Angeles County spokesman revealed the area surrounding the RVs should be avoided ‘until further notice’ as it was being converted into a shelter for people suspected of carrying the COVID-19 virus.

‘LA County will work with private sector providers, faith-based groups, non-governmental organizations (NGOs), community-based organizations (CBOs) and government partners to support those in isolation or quarantine with comprehensive services to ensure their safety, health and well-being,’ they added.

‘Supportive housing facilities will be distributed across all areas of the County to limit disruptions as much as possible.

‘This is an emergency action that Los Angeles County is taking to comply with the Department of Public Health’s orders to keep the entire County safe.’

Photographs show dozens of Four Winds RVs lining the coastal area in preparation for an expected rise in the need for emergency accommodation. The state is also acquiring two vacant hospitals to beef up capacity as it faces the possibility of a surge in the number of hospital patients.

It comes as it was revealed ‘few, if any’ California schools will reopen before summer break, Gov. Newsom said Tuesday as he provided a stark assessment of the implications from the spreading coronavirus that threatens to overwhelm the state’s hospitals and drain its spending reserves.

While urging Californians to stay united and promising ‘we will get back to the life that we have lived,’ Newsom also acknowledged much is unknown and so the state is preparing for frightening worst-case scenarios.

He put the California National Guard on alert for duties that include humanitarian missions like ensuring proper food distribution and public safety as some grocery stores resorted to rationing to control panic buying.

The virus is affecting every aspect of life in California and is devastating many of the state’s key industries.

With the state’s reserves approaching $21 billion, Newsom said the state has more money in its savings account than ever before. But he warned that ‘the magnitude of this moment may exceed those reserves’.

The state Legislature approved $1.1 billion in emergency spending Monday and then voted to suspend its session in what is believed to be the first unexpected work stoppage in 158 years. Lawmakers went one step further Tuesday by closing both the Capitol and the Legislative Office Building to the public ‘until further notice.’

It’s all part of a rapidly escalating reaction that saw three more Northern California counties on Tuesday follow the example of those in the San Francisco Bay Area that told residents to stay at home and go outside only for food, medicine and other essential needs.

At a news conference, Newsom did not announce a similar requirement statewide, but previously told bars, restaurants, movie theaters, fitness centers and other gathering places to shut their doors as the death toll crept to 12 and the number of confirmed cases neared 500.

All people 65 and older and those with underlying health conditions have been encouraged to stay indoors.

when readying the National Guard for action, Newsom’s office emphasized it was for duties routinely performed during natural disasters and other emergencies. But Newsom grimly added that ‘we have the ability to do martial law… if we feel the necessity.’

Imposing martial law would take the extraordinary step of replacing the usual laws with military authority, with the possible suspension of civil liberties like freedom of association and movement.

US and California health officials have repeatedly warned the virus could have a devastating impact and the timetable for controlling it isn’t known. President Donald Trump on Monday said the crisis could last until August.

California’s 415 hospitals have been planning for a surge of patients. They have about 88,000 beds and Newsom said health officials are running models to determine needs based on various infection rates and resulting hospitalizations. Under worst-case scenarios, California could be short 20,000 beds, he said.

‘So we had a very candid and a sober if not sobering conversation about where we may be and where we need to go together,’ he said after the meeting with hospital officials.

‘The good news is none of it surprised any of us. We as a state, working with our system, anticipated much of these needs and have been running plans to address them.’

He said the state should have the two large hospitals in its possession as early as Friday and will use money from the emergency authorization to get them ready for service.

Meantime, on the education front, Newsom said nearly 99 per cent of the state’s K-12 schools are shuttered for periods generally ranging from two to five weeks. Newsom, a father of four young children, said his family is among those that have started home-schooling.

‘It is unlikely that many of these schools, few if any, will open before the summer break,’ he said, urging the more than 6 million schoolchildren and their families to make long-term plans.

The state has applied for a federal waiver that means children would not have to face academic tests once they eventually return to school, said Newsom, a first-term Democrat.

‘We think it is totally inappropriate for kids to worry about coming back and being tested,’ he said.

Newsom also shared a personal story that influenced his decision to tell the public to prepare for longer-than-expected closures.

He said he returned home late Monday after a hectic day to find one of his two daughters, six-year-old Brooklynn, in her room, her stuffed bunny and most of her bedding on the floor. She was crying and upset about her school being closed and not seeing her friends.

‘I told her, “Honey, I don’t think the schools are going to open again”,’ Newsom said. ‘If I can tell my daughter that and not tell your daughter… then I’m not being honest and true to the people of the state of California. Boy I hope I’m wrong, but I believe that to be the case.’

Many of the shuttered schools may be used to provide meals to lower-income students and for child care, Newsom said.

Providing child care at a time when residents are supposed to remain well separated to avoid spreading the disease brings its own challenges, Newsom said. Those caregivers ‘will want to have personally protective gear, make sure social distancing is practiced, make sure that we not just secure the sites but make sure that they’re healthy,’ he said.

He said some of the money approved by state lawmakers on Monday could go to help with that effort.

Source: By EMER SCULLY FOR MAILONLINE