Gasoline futures in New York fell as much as 13% to 50.00 cents a gallon, the lowest level since the current contract started trading in 2005. 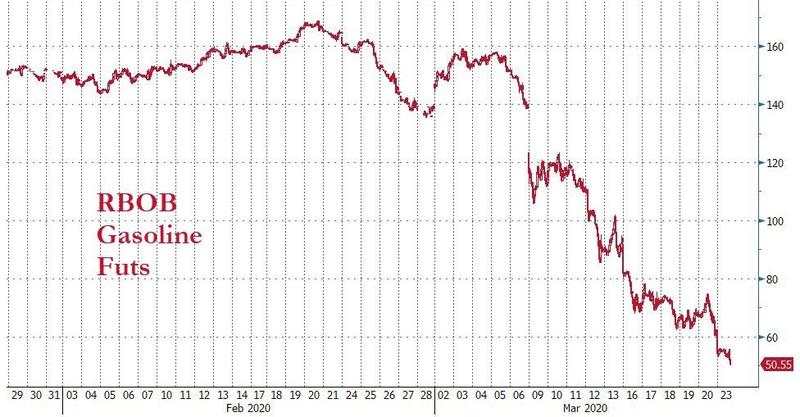 The previous gasoline contract last traded that low in 2001…

Energy prices slid toward this multi-decade low on plunging demand due to the economic fallout from the coronavirus crisis, and as prospects for a OPEC-Texas production deal faded.

“The government is taking a ‘whatever it takes’ approach,” said Marshall Steeves, an analyst at IHS Markit.

“That doesn’t change the fact that demand destruction is going to continue. There are still so many unknowns on the demand front. The duration of this economic shutdown is so uncertain that it’s making me believe the bottom may not be in yet.”

As Bloomberg notes, the prospects for the oil market remain bleak with more nations going into lockdown to tackle the virus. At the same time, supply is surging. The chance that either Saudi Arabia or Russia will back down from their price war seems remote, with President Vladimir Putin unlikely to submit to what he sees as the kingdom’s oil blackmail, according to Kremlin watchers.

Even if crude demand recovers to normal levels by the middle of the year, 2020 is still on course to suffer the biggest decline in consumption since reliable records started in the mid-1960s.

“We are now looking at a scale of surplus in the second quarter we probably never have seen before,” said Bjarne Schieldrop, chief commodities analyst at SEB.

Until now, the biggest annual contraction was recorded in 1980, when it tumbled by 2.6 million barrels a day as the global economy reeled under the impact of the second oil crisis.