(ZeroHedge) We warned last week that, despite The Fed’s unlimited largesse, there is trouble brewing in the mortgage markets that has an ugly similarity to what sparked the last crisis in 2007. For a sense of the decoupling, here is the spread between Agency MBS (FNMA) and 10Y TSY yields… 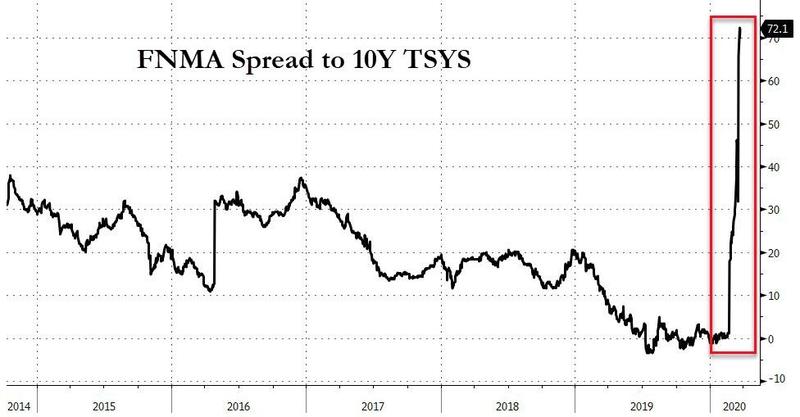 At that time, WSJ’s Greg Zuckerman reported that the AG Mortgage Investment Trust, a real-estate investment trust operated by New York hedge fund Angelo, Gordon & Co., is among those feeling pressure, the company said, and, in the latest sign of turmoil in crucial areas of the credit markets, is examining a possible asset sale.

“In recent weeks, due to the turmoil in the financial markets resulting from the global pandemic of the Covid-19 virus, the company and its subsidiaries have received an unusually high number of margin calls from financing counterparties,” AG Mortgage said Monday morning.

Well, they are not alone.

As Bloomberg reports, the $16 trillion U.S. mortgage market – epicenter of the last global financial crisis – is suddenly experiencing its worst turmoil in more than a decade, setting off alarms across the financial industry and prompting the Fed to intervene. But, as we previously noted, it is too late and too limited (the central bank is focusing on securities consisting of so-called agency home loans and commercial mortgages that were created with help from the federal government).

And the aftershocks of a chaotic rush to offload mortgage bonds are spilling over to regional broker-dealers facing mounting margin calls.

Things escalated over the weekend, according to Bloomberg,  when some firms rushed to raise cash by requesting offers for their bonds backed by home loans.

“I ran dealer desks for over 20 years,” said Eric Rosen, who oversaw credit trading at JPMorgan Chase & Co., ticking off the collapse of Long-Term Capital Management, the bursting of the dot-com bubble some 20 years ago, and the 2008 global financial crisis. “And I never recall a BWIC on a weekend.”

And now, commodity-broker ED&F Man Capital Markets has been hit with growing demands to post more capital to cover souring hedges in its mortgage division, according to people with knowledge of the matter.

The requests are coming from central clearinghouses and exchanges, forcing the firm to put up almost $100 million on Friday alone, the people said, asking not to be identified because the information isn’t public.

ED&F, whose hedges exceed $5 billion in net notional value, has been in discussions with the clearinghouses and has met all the margin calls, one of the people said.

As a reminder, ED&F Man Capital is the financial-services division of ED&F Man Group, the 240-year-old agricultural commodities-trading house.

It has about $14 billion in assets and more than $940 million in shareholder equity, according to the firm’s website.

Concern about losses in mortgage bonds could feed turmoil in the overall mortgage market that ultimately drives up borrowing costs for consumers looking to buy homes and refinance. Mortgage rates have risen in recent weeks, despite a fall in benchmark rates.

“The Fed is going to do whatever it takes to restore normal functioning in the market,” said Karen Dynan, a Harvard University economics professor who formerly worked as a Fed economist and senior official at the Treasury Department.

“But we need to remember that the root of the problem is that financial institutions and investors are desperately seeking cash, so in that sense the Fed’s announcement is not everything that needs to be done.”