There was something strange about today’s continuation rally in stocks: while risk assets soared, the VIX barely moved. In fact the Vix is now roughly where it was on Monday, largely ignoring the move in stocks. 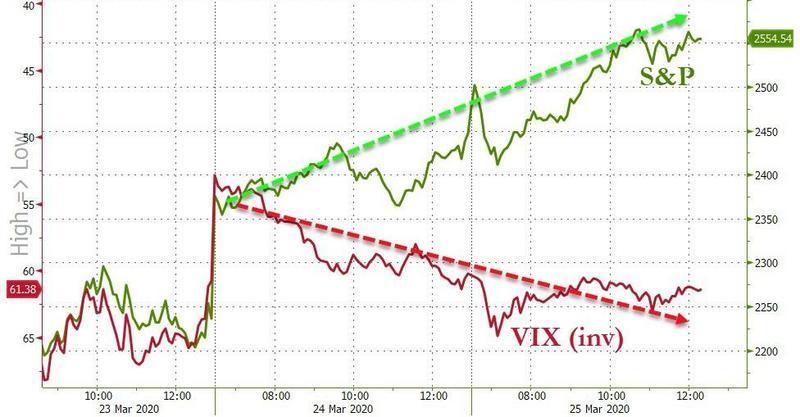 But there was another more sinister move in today’s risk rally, which as we noted earlier, appears to have been mostly a massive short squeeze, in fact the biggest two-day short squeeze in history…

… namely the persistent buying of safe havens such as Treasury’s but more importantly, Bills.

And so, one week after we reported that yields on many T-Bills through 3 months turned negative for the first time since the financial crisis, today virtually all Bills maturing around July had a negative yield.

Needless to say, a scramble for both cash-equivalents (i.e. Bills) and stocks is rather unorthodox, and sparked debate among Wall Street desks what may be behind it. One answer that emerged is that for those who did not have faith in today’s stock rally and wanted to allocate their funds elsewhere, yet in the absence of available physical gold as a result of the unprecedented scarcity described yesterday, the one place where investors could find “cash equivalent” securities was among the short T-Bill maturities.

If this theory is correct, it would mean that the pent up demand for physical gold is unprecedented and any newly available precious metal will be quickly snapped up as soon as it is available, which in light of the unprecedented expansion in central bank balance sheets as virtually every state is now pursuing helicopter money, is hardly that surprising.