Given the fact that over 30 million Americans have filed for initial jobless claims in the last six weeks, it is perhaps no surprise that economists expected a 20.5 million ADP job loss in April. In fact, silver lining, the number ‘beat’ with 20.236 million. 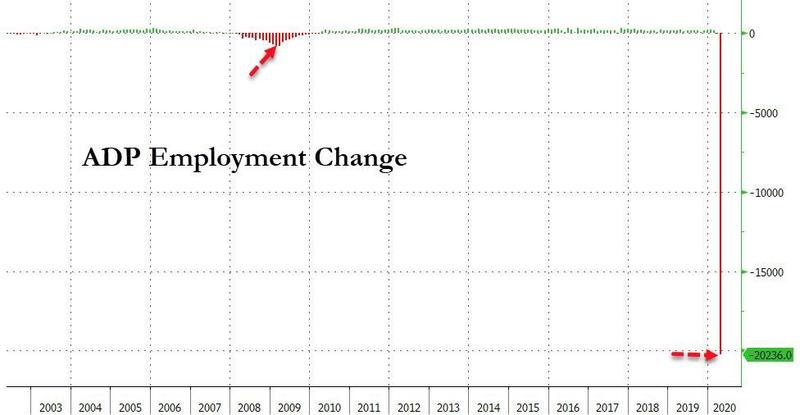 For context, the largest monthly job loss during the great financial crisis was just 834,700! 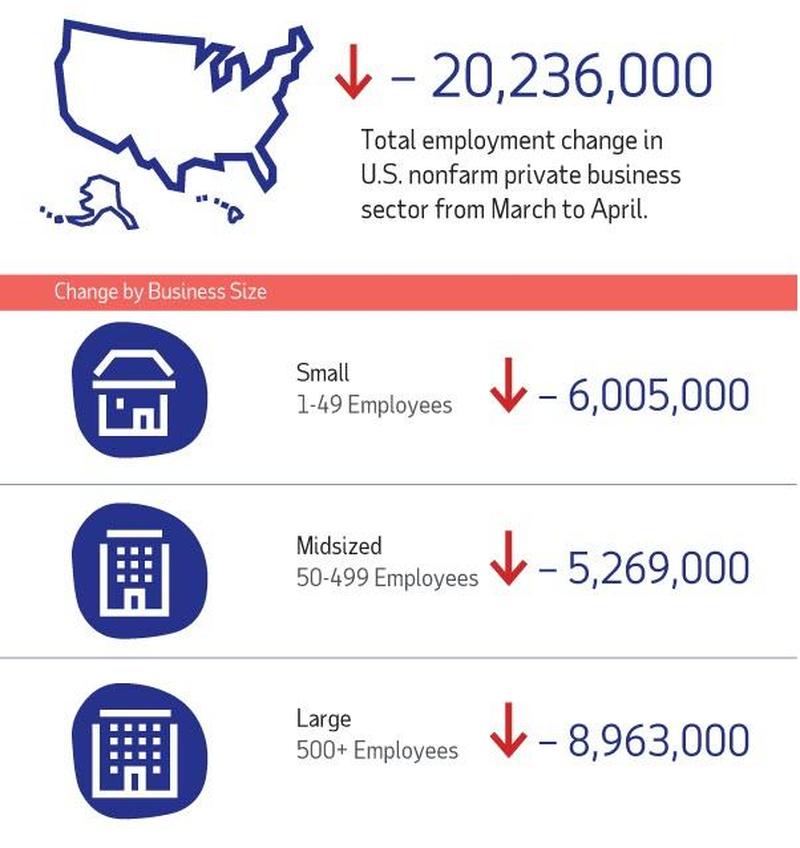 And the service sector saw the biggest job losses… 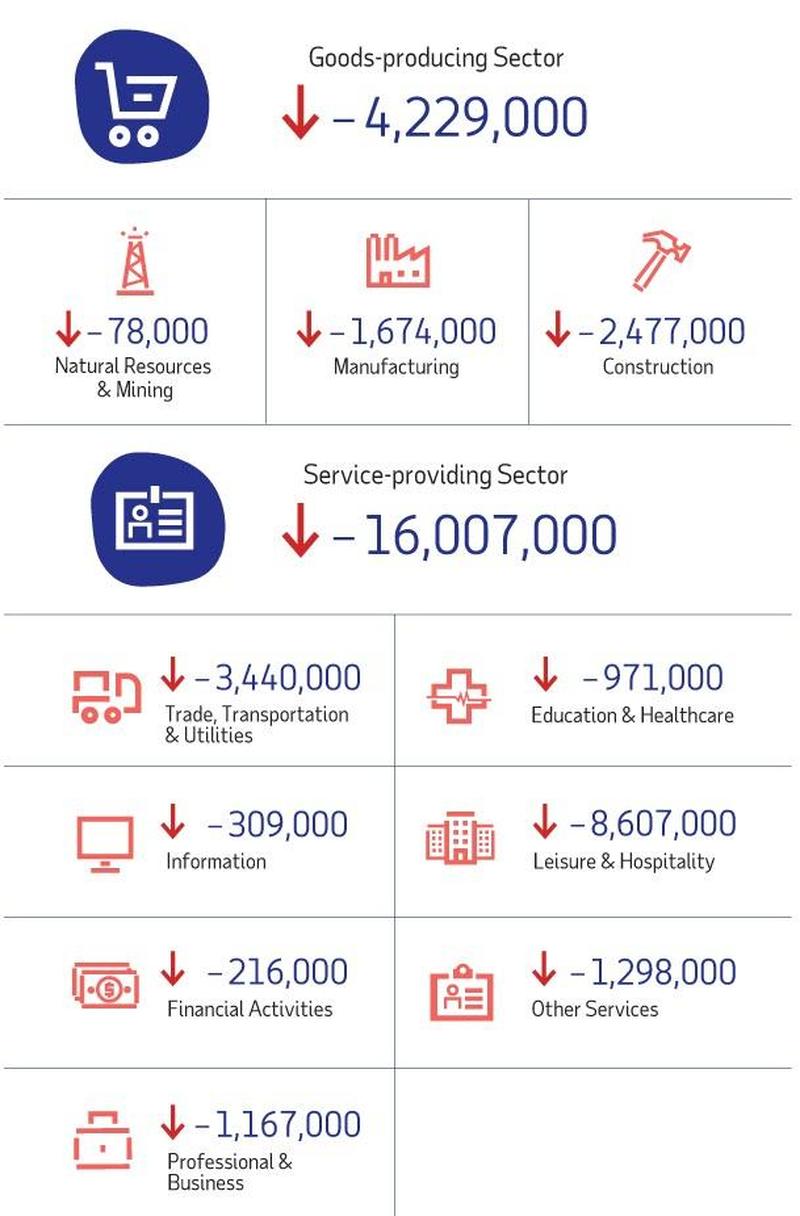 If you’re an educator or in “management”, it would appear times remain good… 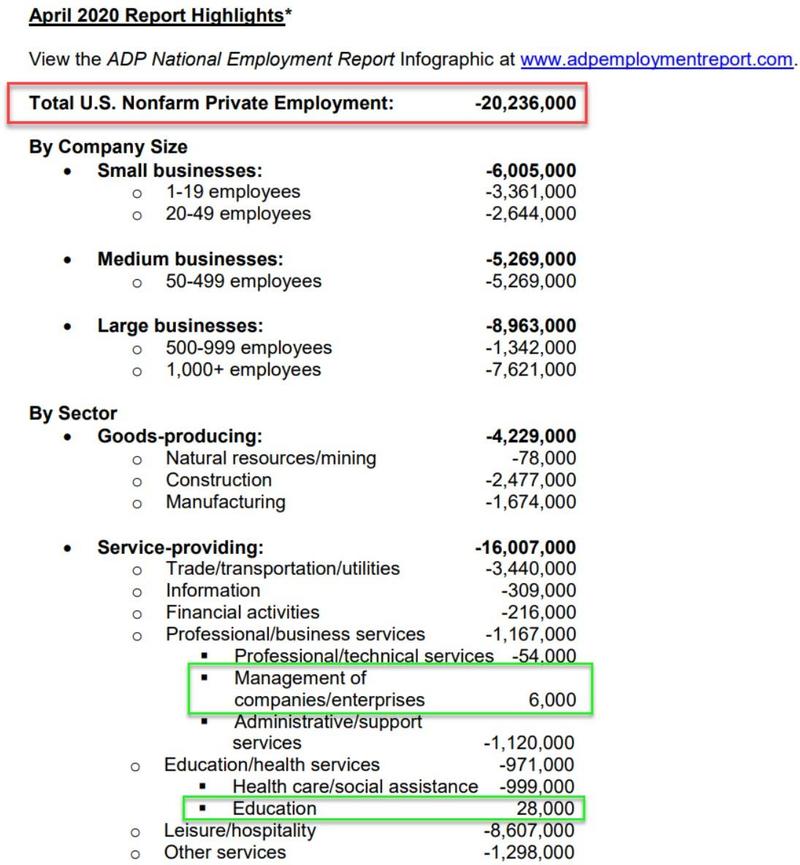 “Job losses of this scale are unprecedented. The total number of job losses for the month of April alone was more than double the total jobs lost during the Great Recession,” said Ahu Yildirmaz, co-head of the ADP Research Institute.

“Additionally, it is important to note that the report is based on the total number of payroll records for employees who were active on a company’s payroll through the 12th of the month. This is the same time period the Bureau of Labor and Statistics uses for their survey.”

And as we noted previously, far more Americans have lost their jobs in the last month than jobs gained during the last decade since the end of the Great Recession… (22.13 million gained in a decade, 30.3 million lost in 6 weeks) 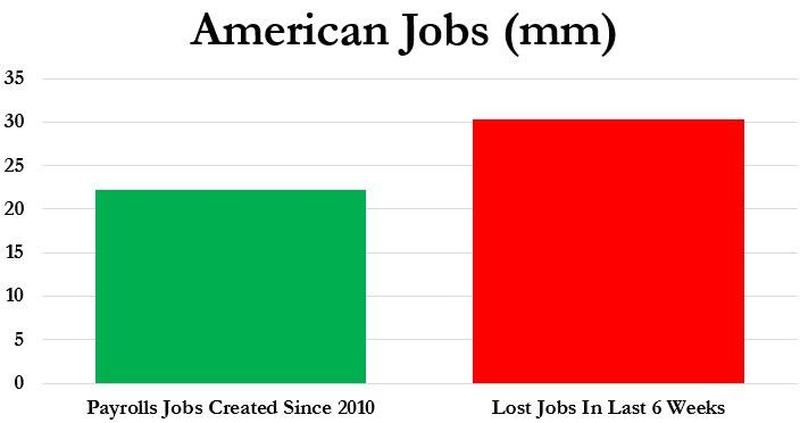 Worse still, the final numbers will likely be worsened due to the bailout itself: as a reminder, the Coronavirus Aid, Relief, and Economic Security (CARES) Act, passed on March 27, could contribute to new records being reached in coming weeks as it increases eligibility for jobless claims to self-employed and gig workers, extends the maximum number of weeks that one can receive benefits, and provides an additional $600 per week until July 31. A recent WSJ article noted that this has created incentives for some businesses to temporarily furlough their employees, knowing that they will be covered financially as the economy is shutdown. Meanwhile, those making below $50k will generally be made whole and possibly be better off on unemployment benefits.

As Mises’ Robert Aro noted earlier in the week, the stimulus packages being handed out across this world provide us with an opportunity to document the anti-capitalist process as it unfolds in real time, keeping in mind that when these inflation schemes fail, it will likely be blamed on capitalism.

The combination of increasing the money supply in order to pay people not to produce goods or services has consequences that not a lot of people are talking about.

It flies in the face of the free market and is as nonsensical as a negative interest rate. A loan that is forgivable is unconventional to say the least, because a loan is normally defined as an amount borrowed that is expected to be paid back with interest. When a loan is given on a first-come-first-served basis for the purpose of paying people not to work and is forgivable because it’s guaranteed by the United States government, we shouldn’t call it a loan.

It may be called socialism, maybe interventionism, and some may still prefer the term statism; but one thing is certain when it comes to the Paycheck Protection Program: it’s not capitalism! 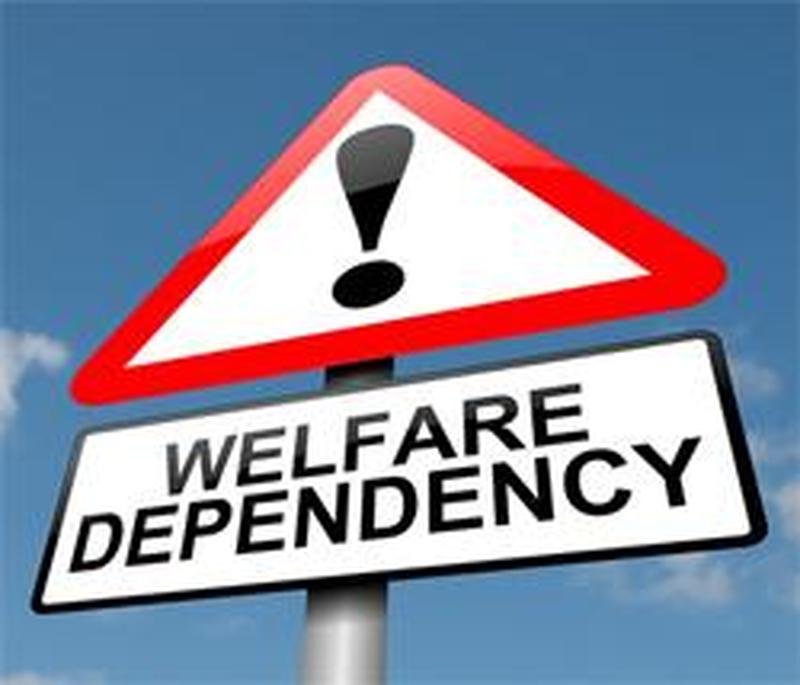 Welfare cliffs are of course not the only reason so many capable Americans languish in partial dependency on government assistance. Dreadful government schools in poor areas and systematic obstacles to getting a job, such as minimum wage laws and occupational licensing laws, are also to blame. But the perverse incentives of America’s welfare system really hurt, and the CARES Act may have been a serious tipping point.

But, hey, there’s good news… well optimistic headlines as Treasury Secretary Steven Mnuchin said he anticipates most of the economy will restart by the end of August.

Was it worth it?

You will have only two choices now: do hard things, or submit to Globohomo. What are you doing today to prepare yourself and your people for Hard Tasks?