After surged in October, US home prices (as measured by S&P CoreLogic Case-Shiller index of property values) was expected to accelerate further as a low inventories of listings and solid demand, fueled by cheap borrowing costs, have given sellers more leeway to raise asking prices. And it did not disappoint as November (the latest data) showed the 20-City Composite Home Price Index soared 9.08% YoY… the fastest pace since May 2014. 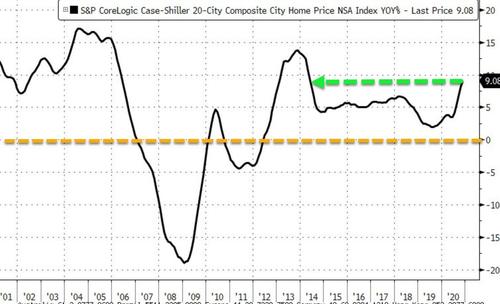 “Although the full history of the pandemic’s impact on housing prices is yet to be written, the data from the last several months are consistent with the view that Covid has encouraged potential buyers to move from urban apartments to suburban homes,”

And that trend is continuing.

Democrats Have Released A Roadmap To One-Party Rule

“Greatest Rise In Inequality Ever”: The Last 6 Months Saw Sharpest Rise In US Poverty In Half-Century

“I Don’t See a Financial Crisis Occurring In Our Lifetimes.” – Janet Yellen, June 2017