A new audit of California’s Employment Development Department (EDD) finds the agency was unprepared and had ineffective management to handle the surge in jobless claims during the virus pandemic. 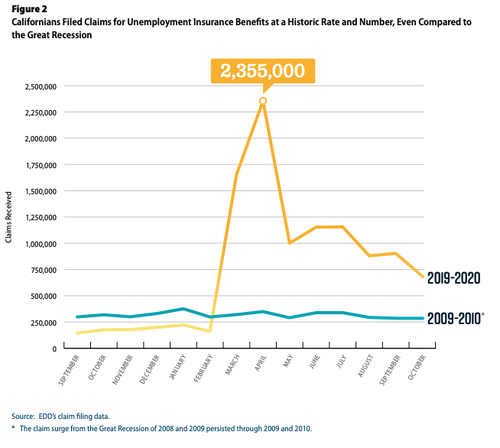 One of the most notable abuses was rapper Fontrell Antonio Baines, 31, who fraudulently collected $1.2 million in EDD claims. He even detailed the EDD scam in a rap video.

State lawmakers had criticized the agency for massive backlogs that delayed claims, along with its failure to prevent widespread fraud.

“Although it would be unreasonable to have expected a flawless response to such a historical event, EDD’s inefficient processes and lack of advanced planning led to significant delays in its payment of [unemployment insurance] claims,” Howle’s letter said, which was addressed to the governor and lawmakers.

Howle found at least half of the claims submitted online to EDD could not automatically process between March and September and were processed manually.

“As a result, hundreds of thousands of claimants waited longer than 21 days — EDD’s measure of how quickly it should process a claim — to receive their first benefit payments,” Howle said. “EDD has begun to modify its practices and processes to increase the rate at which it automatically processes online claims, but the automation it has gained during the pandemic is not fully sustainable.”

As the backlog soared during the pandemic and internal chaos at EDD erupted, the agency relaxed eligibility rules to speed up claims distribution. This may have resulted in millions of people who shouldn’t have received claims or were overpaid. Now EDD is deciding how these folks will repay the jobless benefits they got during the pandemic. 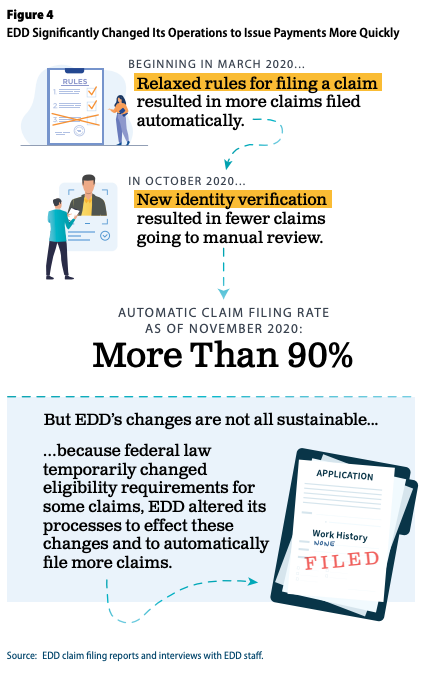 “That could have significant consequences for claimants,” the audit said.

In December, EDD flagged 12.7 million eligibility issues affecting 2.4 million people. To review the millions of issues, it would take the agency 3 million hours of work to resolve just half of the claims.

California Labor Secretary Julie Su said this week that the state paid out $11.4 billion in fraudulent claims last year, representing about 10% of the $114 billion in benefits paid since March.