As much as half of the unemployment benefits paid by the US government over the past year may have been stolen through fraud, with the bulk ultimately ending up outside the country – likely into the hands of foreign crime syndicates in China, Nigeria, Russia and elsewhere, according to Axios‘ Felix Salmon.

END_OF_DOCUMENT_TOKEN_TO_BE_REPLACED

A new audit of California’s Employment Development Department (EDD) finds the agency was unprepared and had ineffective management to handle the surge in jobless claims during the virus pandemic.

END_OF_DOCUMENT_TOKEN_TO_BE_REPLACED

In the lead up to this morning’s must-watch initial jobless claims data, searches for unemployment-related services have exploded as national lock downs have led to mass layoffs across both the services and manufacturing sectors.

And while analysts expected a modest 220k jump, the print came at 281,000 new jobless claims in the last week…

However, worse is guaranteed to be coming with claims will start moving sharply higher in the next few weeks (as only a small relative share of the moves was captured in today’s data which corresponds to the week ended March 14).

As Bloomberg’s Carl Riccadonna notes, scaling up the trends around the landfall of Hurricane Katrina in 2005 and the start of the Great Recession in late 2007 provide some context for understanding the severity of the economic shutdown currently underway. 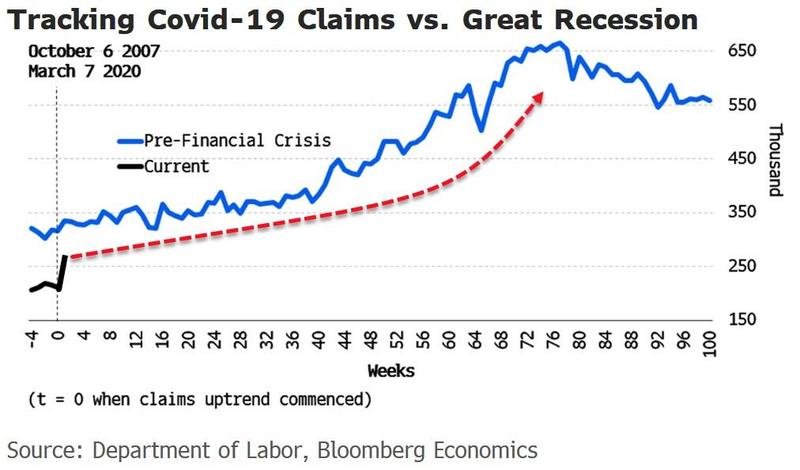 Claims could continue to show an influx in that range for an extended period of time – possibly moving above 500k. Claims topped over 660k in early 2009, during the financial crisis.