(Austrolib) Gold and silver bugs are understandably frustrated with the lack of movement on the silver price while Bitcoin goes beyond the moon. Demand for physical silver has skyrocketed, and physical shortages at coin dealers are acute internationally. New American Silver Eagles from the US Mint are out of stock at even the largest US-based dealers like Apmex, and are only selling in pre-sales at near 50% premiums. ATS Bullion, a London-based precious metals retailer, is completely out of silver coins.

It’s natural and even widespread to blame silver market manipulation for these physical shortages and cry foul. I sort of agree, but not in the way that most silver bugs think. My understanding of silver market manipulation is not really a “throw your hands up” expression of despair or even an accusation of wrongdoing per se. Maybe there’s wrongdoing, but I’m not making any judgments on that either way here. My view is instead a nuanced take on the way the precious metals demand generally expresses itself in the market. I will explain exactly what I mean by this in a minute, but first, on manipulation itself.

I define manipulation as preventing the market-clearing price from being reached by some non-market force. The classic example is minimum wage laws that force surpluses in the labor market (unemployment) or gasoline price controls after hurricanes for example that force major shortages in the affected areas. In that strict sense, there’s no bona fide silver market manipulation going on because there’s no law against charging whatever you want for a silver coin.

The questions I will try to answer in this piece are three:

Why Such a Huge Premium for Physical Silver Now?

What’s going on in the silver market I prefer to call “tinkering,” rather than outright manipulation. Tinkering is only possible in these markets for extended periods of time because the demand for physical silver (and gold as well) is bifurcated into two discrete forms that have nothing to do with each other. One is industrial, and the other is monetary. The tinkering appears to be taking place primarily in the futures market and not the physical market, hence the enormous premiums for physical coins since the beginning of February.

The futures market exists in order to set prices for silver producers, or any commodity producer really. Producers use futures in order to lock in a price for something that they have not yet produced by selling contracts forward and delivering into them. Without futures, there would be no way for producers to be sure they can produce a commodity profitably, since they would never know what price they can get for their product in any given month.

Besides the futures markets, there are, of course, the physical markets. There’s always a premium charged for a physical commodity over the futures price for that commodity because the end retail product is farther down the structure of production. For commodities like wheat and soybeans though, there’s almost never such a thing as a sudden shortage as we are seeing in the monetary silver market right now.

Imagine for a moment that the demand for wheat suddenly skyrocketed. Obviously, the futures price for wheat would skyrocket in sympathy. Otherwise, there would be serious food shortages. There’s almost never a prolonged disconnect between the paper and physical markets in consumer commodities like wheat and soybeans because there is only one type of demand for consumable commodities like these, and that’s of course to eat them, or for energy commodities like oil, to burn them for energy.

In silver, and gold as well, this isn’t really the case because demand exists in two very separate classes, industrial and monetary. Industrial demand is fairly continuous and smooth. Sometimes it rises, sometimes it falls, but never suddenly in desultory jumps or crashes. Industrial demand for silver and gold includes jewelry as well as standard industrial applications whatever they may be.

Here’s where the paper/physical disconnect potential comes in. While industrial demand is fairly continuous, monetary demand for silver can jump very suddenly, or fall very suddenly. The clearing price in the silver futures markets is based mostly on clearing industrial demand, with the built-in assumption of fairly continuous monetary demand by a small but stable number of silver coin collectors. But when trust in the dollar as a monetary reserve falls suddenly, which can happen and did happen around 1980, monetary demand for the metals tends to jump suddenly and broadly, overwhelming supplies. This is what causes sudden physical shortages of silver in monetary form. This is what is happening now.

Why suppress the paper silver price?

The answer is that monetary demand is very different from industrial demand by its very nature. Monetary demand, if not suppressed, can easily turn into a positive feedback loop, because the more value a monetary metal like silver has in dollar terms, the more demand there is to have it as a monetary reserve in place of the dollar itself. There is no natural balancing mechanism as there is in consumable commodities that are not used as money.

Raising interest rates was possible during the last run on silver in 1980 when it last hit $50, because debt levels were much lower back then than they are now, and stocks were also nowhere near highs. This is exactly what then-Fed Chair Paul Volcker did, pushing up overnight interest rates on the dollar to near 20% so as to increase demand for the dollar as a monetary reserve, which eventually crushed monetary demand for silver and brought the price back down in dollar terms.

But if you can’t raise interest rates, the only way to stop a dollar run and a flight into precious metals as a monetary reserve is to push the paper price of silver down by shorting silver futures. Banks have a vested interest in doing this because if the dollar falls too fast, the value of the bonds on their balance sheet plummet, causing a systemic banking crisis. If silver stops rising in dollar terms though on the paper markets, the demand for it as a monetary reserve tends to eventually ebb, stabilizing the dollar that way.

Pushing the price of silver down by shorting futures though, has another consequence, and that is it prolongs physical shortages, forcing backwardation in the silver market. This point we have already reached. Here are the latest futures tables for silver current to February 9.

As you can see, the silver price for April delivery is inverted out to May 2022 (excepting December). Backwardation like this in the silver market is extremely rare. The last time it happened was in March 2020, when silver collapsed to an $11 low. The time before that was September 2015, and prior to that, February 2011. Here’s a chart showing what the paper silver price did following each of these silver backwardation periods. 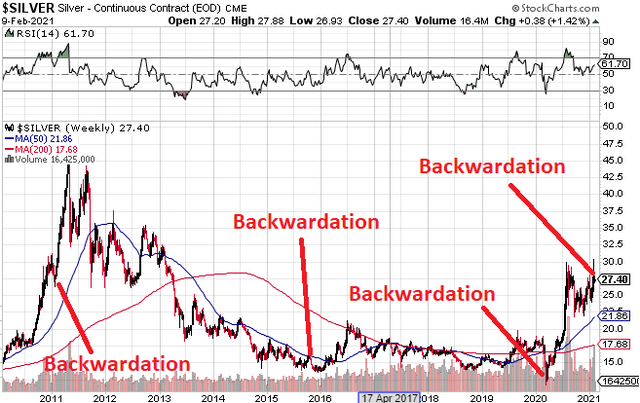 When Will the Gap Close, and How High Will We Get?

A look at the chart above shows that it did not take very long for the silver futures price to rise significantly following the last three periods of silver backwardation. It was only a matter of months each time. Back on February 11, the price rose from $27.50 to a high of $49.82 in only three months. During the backwardation of September 2015, silver was trading at $14.25, hitting a high of around $21 by July 2016 10 months later. In March 2020, silver was near $11, nearly tripling to $30 by August 5 months later.

The timing this time around won’t be an exact repeat. History never repeats exactly, but it rhymes. That said, I believe we are within months of silver reaching new all-time highs above $50.