(ZeroHedge) Households across the US rejoiced over the weekend as they received their first stimulus checks. And as BofA’s team of analysts parses exactly how millions of Americans will spend this money (will they buy washing machines and toasters? Or dump it into crypto/GME?), Bloomberg is out with a chilling report alerting Americans to the inevitable reality that President Biden is about to switch gears from spending to fundraising.

Of course, we use that term loosely: Despite the fact that Biden just shelled out another $1.85 trillion to finance a third round of stimulus checks (not to mention hundreds of billions in handouts to states and municipalities), his administration isn’t raising money to pay for that. Instead, they’re looking to finance a Democratic “New New Deal”.

Breaking with his former boss, Barack Obama (who signed legislation to make most of the Bush-era tax cuts permanent), Biden is embarking on what could be the biggest federal tax hike since 1993 (remember ‘no new taxes’?) to finance an infrastructure plan, Biden’s climate-change initiatives, health care and economic inequality.

Unlike the $1.9 trillion Covid-19 stimulus act, the next initiative, which is expected to be even bigger, won’t rely just on government debt as a funding source. While it’s been increasingly clear that tax hikes will be a component – Treasury Secretary Janet Yellen has said at least part of the next bill will have to be paid for, and pointed to higher rates – key advisers are now making preparations for a package of measures.

With each tax break and credit having its own lobbying constituency to back it, tinkering with rates is fraught with political risk. That helps explain why Bill Clinton’s signature 1993 overhaul stands out from the modest modifications done since.

With all the talk about a federal ‘wealth tax’ (thanks, Elizabeth Warren) – progressives in certain parts of the country are already pushing for state wealth taxes in places like New York – the notion that taxes will move higher under Biden is hardly a surprise. 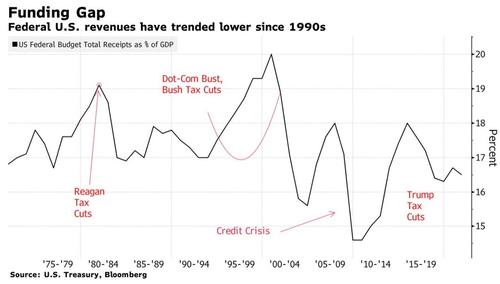 According to Bloomberg, the tax hikes would likely take effect next year, despite modest support for delaying them further among some Democrats. An independent analysis of the Biden campaign tax plan published by the Tax Policy Center (and cited by Bloomberg) estimated the new revenue streams would raise $2.1 trillion over a decade, though, given the current political climate (with West Virginia’s Joe Manchin still acting as a check on Democratic excess) the final total will likely be smaller. To be sure, Democrats will need to convince 10 Republicans to back the bill to circumvent the filibuster.

The overall program has yet to be unveiled. Nevertheless, analysts are penciling in between $2 trillion to $4 trillion. No date has yet been set for an announcement, though the White House said the plan would be introduced after the COVID relief bill was signed into law.

Bloomberg has a list of proposals that are reportedly under consideration, though they all likely won’t make it into the final bill. Notably the first two bullets would effectively unwind the two biggest components of the Trump tax cuts.

The biggest question for Democrats is which parts of Biden’s post-Trump new deal actually need to be funded?

An outstanding question for Democrats is which parts of the package need to be funded, amid debate over whether infrastructure ultimately pays for itself – especially given current borrowing costs, which remain historically low. Efforts to make the expanded child tax credit in the pandemic-aid bill permanent – something with a price tag estimated at more than $1 trillion over a decade — could be harder to sell if pitched as entirely debt-financed.

“The next major legislative initiative, infrastructure investment, could provide the sort of durable economic gains that not only support higher pay, but promote diffusion of those gains across demographic lines and political persuasions.”

Just days after the media proclaimed that corporations were cancelling planned layoffs thanks to the Biden stimulus (American Airlines is a particularly salient example), the prospect of a massive hike in corporate taxes threatens to slam this trend into reverse. But the most consequential factor for Americans in the wake of the retail trading boom isn’t the effect on the labor market, but the effect on the markets.

The Fed needs the wealth effect afforded by elevated asset prices to help drive economic growth in the aftermath of the pandemic. How will President Biden, Treasury Secretary Janet Yellen and the Fed’s Jerome Powell square that circle? And as some Democrats will inevitably seek to delay the tax hikes (lest they wreak havoc on the economy should they coincide with the Fed’s first tightening measures) it begs a question recently raised by DoubleLine’s Jeff Gundlach: if so much of these packages is simply debt financed, then monetized by the central bank, why bother with taxes at all?

Gundlach gets it: “80% of the budget is borrowing, so why bother with taxes at all?”