While 4-week Treasury Bill rates had dipped negative on occasion over the past several months, the last time the 4-Week Bill priced at a 0.000% investment rate was during the post-covid crash scramble, when the 4-Week printed at 0.000% on the March 26 auction. 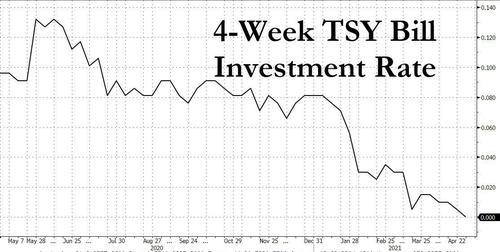 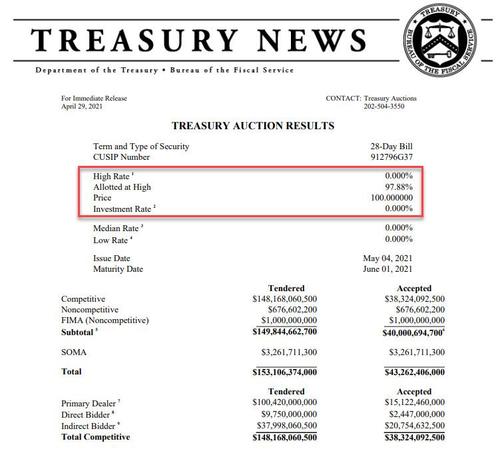 To be sure, Bills had printed at 0.000% at auction previously, but that was largely during the reserve glut days of 2015.

So why now? The same reason usage of the Fed’s Reverse Repo facility has soared in recent weeks for nothing to over $100 billion… 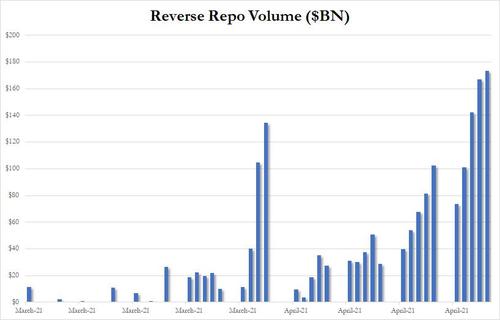 …as investors choose to directly transact with the Fed – where only positive rates are allowed – rather than the open market where collateral rates have frequently been negative in recent weeks, as Curvature’s Scott Skyrm explains in this note from April 26:

Overnight rates are low. Too low by all normal standards. The fed funds rate is well below the mid-point of the fed funds target range and the Repo GC rate is at zero; often trading negative. Zero percent interest rates are forcing billions of dollars of cash into the Fed’s RRP facility; a total of $100.9 billion went there today.

While this This is a delightful case of deja vu irony – the Fed is taking Treasurys out of the market through QE purchases and putting them right back in via the RRP – it is also distorting the Repo market, and although the Fed can fix this aberration by hiking the IOER or RRP rates, it has so far refused to do so.

If the Fed wants to push Repo rates higher, an IOER hike would help. Raising the IOER will move fed funds, which, in turn, will put upward pressure on Repo rates. As an alternative, the Fed could increase the RRP rate – currently at zero. This is most favored by economists. However, increasing the RRP will mean cash investors sending more cash to the Fed each day.

This is also having a knock-on effect on Treasury bills, which have been under pressure as the government is reducing its issuance of short-term securities in order to draw down its mammoth cash balance so it can comply with a possible debt-ceiling reinstatement and to cover expenses.

As Bloomberg writes, in its survey of dealers ahead of the next refunding announcement, the Treasury Department has asked about “the impacts that reinstatement of the debt limit could have on the Treasury market as well as on broader financial markets.” Related to that, it has also asked about for expectations for bill supply over the next three months and adjustments in issuance.

The good news is that negative bill rates at auction are not possible (yet). The bad news is that as the Treasury continues to draw down on its cash, the rate on 4-week (and soon 8-week and so on) auctions will be 0.000% while secondary market yields will dip negative again, encouraging the return the infamous ZIRP/NIRP auction arbitrage trade which we observed a year ago.

Schiff: ‘We Can’t Ignore’ That Some Of Trump’s Base Are ‘White Nationalist Domestic Terror Threat’