The Federal Reserve continued to increase its holdings of mortgage-backed securities by the tune of $40 billion per month, fueling a housing bubble with record-low mortgage rates and low inventory.

Even as the housing sector has more than recovered from the downturn, Chair Jerome Powell continues pedal to the metal with MBS purchases. According to the National Association of Realtors (NAR), this has resulted in the median price for a single-family home to soar the most on record in the first quarter. 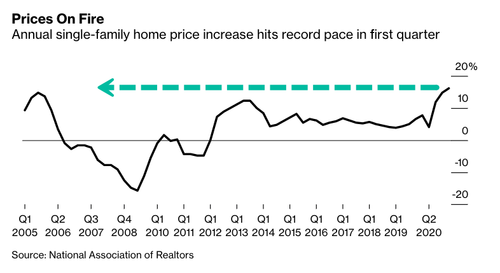 As home prices surge, Powell still doesn’t have a satisfactory answer for why the Fed continues its massive MBS purchases every month.

Here’s Powell’s quote in full from an April press conference:

“Yeah. I mean, we started buying MBS because the mortgage-backed security market was really experiencing severe dysfunction, and we’ve sort of articulated, you know, what our exit path is from that. It’s not meant to provide direct assistance to the housing market. That was never the intent. It was really just to keep that as, it’s a very close relation to the Treasury market, and a very important market on its own. And so, that’s why we bought as we did during the global financial crisis. We bought MBS, too. Again, not intention to send help to the housing market, which was really not a problem this time at all. So, and, you know, it’s a situation where we will taper asset purchases when the time comes to do that, and those purchases will come to zero over time. And that time is not yet.”

Back to the report, Lawrence Yun, NAR chief economist, said, “record-high home prices are happening across nearly all markets, big and small, even in those metros that have long been considered off-the-radar in prior years for many home-seekers.”

Of the 183 metro areas covered by NAR, 163 had double-digit price gains, up from 161 in the fourth quarter.

“The sudden price appreciation is impacting affordability, especially among first-time home buyers,” said Yun. “With low inventory already impacting the market, added skyrocketing costs have left many families facing the reality of being priced out entirely.”

In a separate report, Redfin’s monthly data showed that in April, homes sold at their fastest pace on record with nearly half off-market within one week.

Quantitative easing is a crapshoot, the Fed’s overstimulation is fueling a housing bubble. Any taper announcement, possibly at Jackson Hole, could throw a wrench into the housing market later this year.