For the past several months we have warned about the pernicious effects soaring prices are having on both corporations (“Buckle Up! Inflation Is Here!“) and consumers (“”This Is Not Transitory”: Hyperinflation Fears Are Soaring Across America“), prompting even otherwise boring sell side research to get  (hyper) exciting, with Deutsche Bank (which warned this week that “Inflation Is About To Explode “Leaving Global Economies Sitting On A Time Bomb“) and Bank of America (which “Just Threw Up All Over The Fed’s “Transitory” Argument“) now openly claiming that the Fed is wrong, and the US is facing an unprecedented period of far higher, non-transitory inflation, with DB going so far as to warn “policymakers will face the most challenging years since the Volcker/Reagan period in the 1980s.”

But none of this has spooked the Fed into conceding – or believing – that inflation is anything more than transitory. And maybe just this once, the Fed has a point because all else equal, by which we mean lack of rising wages, the best cure to higher prices is, well… higher prices.

Presenting Exhibit A: two weeks ago, we observed that anticipating an end to Biden’s stimmy bonanza end and that soon they will have to live again within their means, Americans’ buying intentions (6 months from today) as measured by the Conference Board, had cratered across the 3 major spending categories: homes, automobiles and major household appliances. 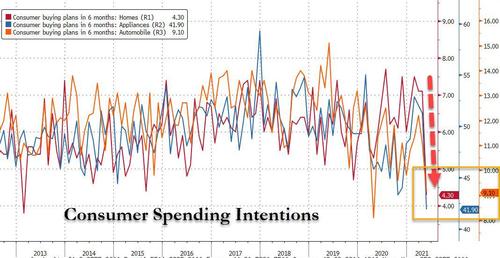 The drop was so massive, it amounted to the biggest one-month drop in intentions to purchase appliances… 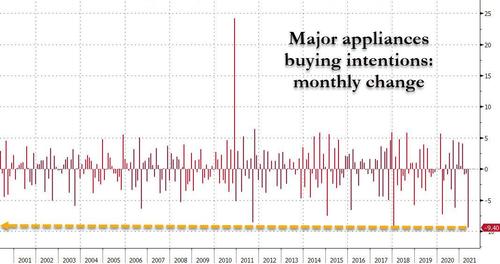 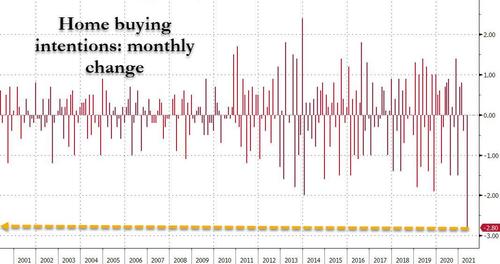 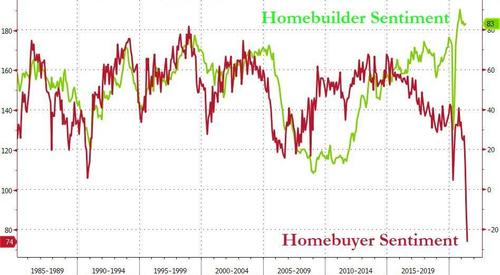 Fast forward to today when we just got Exhibit B: the June UMichigan Sentiment Survey.

While there was some good news here, in that inflation expectations for both the 1-year and 5-10 look ahead periods dropped slightly… 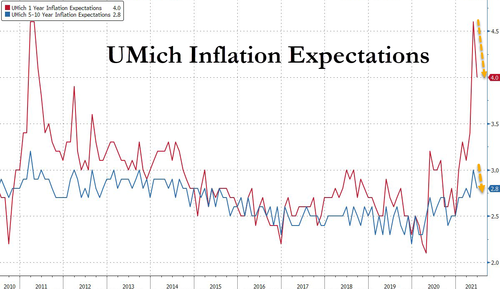 … what we found more concerning is what chief economist, Richard Curtin said namely that since “Rising inflation remained a top concern of consumers”, the spontaneous references to market prices for homes, vehicles, and household durables fell to their worst level since the all-time record in November 1974.

And as Curtin adds, “these unfavorable perceptions of market prices reduced overall buying attitudes for vehicles and homes to their lowest point since 1982. These declines were especially sharp among those with incomes in the top third, who account for more than half of the dollar volume of retail sales.”

This can be seen in the following chart showing records across the board for “bad buying conditions” due to high prices for houses, durable goods and autos. In other words, due to soaring prices is America is going on a buyers’ strike. 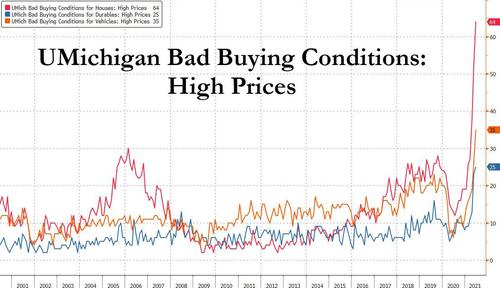 This, for better or worse, screams not only stagflation but also permanently higher prices, as Curting elaborates:

… in the emergence from the pandemic, consumers are temporarily less sensitive to prices due to pent-up demand and record savings as well as improved job and income prospects. The acceptance of price increases as due to the pandemic, makes inflationary psychology more likely to gain a foothold if the exit is lengthy.

The problem: sooner or later the stimmies will end, but prices by then will already be fixed higher, and good luck trying to pull them down.

While expansive monetary and fiscal policies are still warranted, the accompanying rise in inflation will cause uneven distributional impacts. Those impacts have already been noticed in June among the elderly and lower income households. A shift in the Fed’s policy language could douse any incipient inflationary psychology, it would be no surprise to consumers, as two-thirds already expect higher interest rates in the year ahead.

Oh, and for those saying wage hikes may be permanent we have some bad news: employers know very well that the extended unemployment benefits bonanza ends in September at which point millions of currently unemployed workers will flood back into the labor force sending wages sharply lower, and is why instead of raising base pay, most potential employers offer one-time bonuses, which – as the name implies – are one-time. As for higher wage pressures, well… just wait until October when everything reverses, Uncle Sam is no longer a better paying competitor to the US private sector, and wages slump.

What does that mean for the economy? Well, all those producers and retailers who got used to bumper demand and pushed their prices sharply and not so sharply higher, will face a stark choice: either drag prices right back down, or sell far fewer goods and services. That, or just await the next bailout.

One thing is certain: six months from today, the US economy will be far, far uglier.