According to the report, so far in 2021, average rental prices have grown a staggering 9.2%.

With BofA predicting that the US is facing a period of “transitory hyperinflation“, one which could last up to 4 years, as a result of soaring commodity prices in everything from metals to food and beyond, in what increasingly more warn is a stagflationary burst right out of the 1970s playbook… 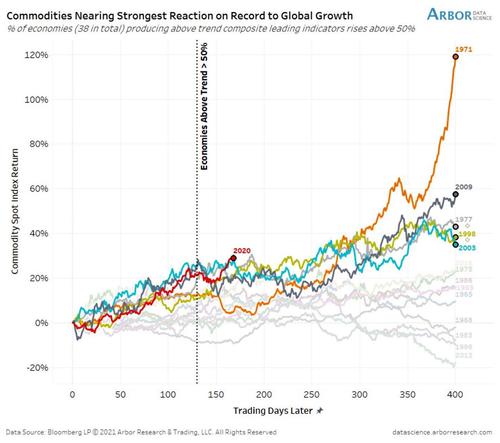 … it makes sense that home prices are also surging thanks to trillions in stimmy checks, near-record low mortgage rates and an exodus away from cities, and as we noted two last month that’s precisely what they are doing, with Redfin reporting an 18% jump in median home sale prices to an all time high…

… as a record 58% of all houses sell within two weeks of listing, of which 45% sell for more than their listing price, also a record. 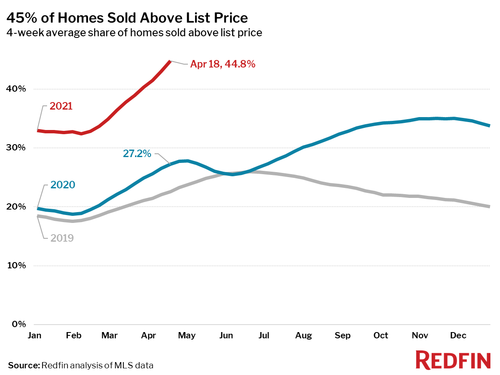 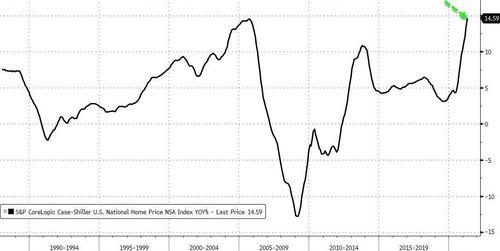 … with all of the major US MSA reporting double-digit or higher annual price increases. 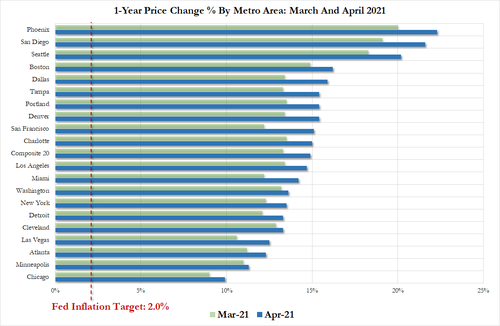 Amid this dismal “transitorily hyperinflationary” landscape, where those whose incomes aren’t similarly hyperinflating find themselves at risk of being unable to afford a roof above their head, there was one ray of hope: renting, with rent prices tumbling in recent months and according to the BLS’ monthly CPI metric, rent inflation had just dropped to the lowest in a decade, just below 2.0% annually even as overall shelter inflation rebounded sharply in recent months… 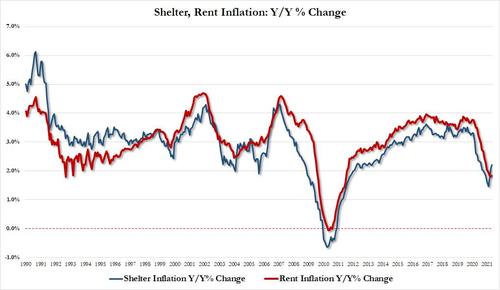 … which due to the way the CPI basket is weighted, has acted as a key drag on overall CPI rates, and helped to distort the broader inflationary picture (after all the last thing the government wants is to be caught in a 1970s’ style hyperinflation). In short, the Fed would look at the relatively tame core CPI which was only tame thanks to “tumbling” rents and would conclude that there is nothing to worry about.

Only, as we first discussed three weeks ago, it now appears that not only was the government misrepresenting the actual data in hopes of extracting as much stimulus from the Biden regime by pretending inflation is low and “contained”, but that rents are in fact soaring once again.

As we reported at the start of May, American Homes 4 Rent, which owns 54,000 houses, increased rents 11% on vacant properties in April, the company reported in a statement:

… Continued to experience record demand with a Same-Home portfolio Average Occupied Days Percentage of 97.3% in the first quarter of 2021, while achieving 10.0% rental rate growth on new leases, which accelerated further in April to an Average Occupied Days Percentage in the high 97% range while achieving over 11% rental rate growth on new leases.

Invitation Homes, the largest landlord in the industry, also boosted rents by similar amount, an executive said on a recent conference call. Or, as Bloomberg puts it, record occupancy rates are emboldening single-family landlords to hike rents aggressively, testing the limits of booming demand for suburban rentals.

While soaring housing costs had put home ownership out of reach for most Americans, rents had been relatively tame for much of 2020. But in recent months, rents have also soared as vaccines fuel optimism about a rebound from the pandemic, and a reversal in the city-to-suburbs exodus.  The increases, as Bloomberg so eloquently puts it, “may add to concerns about inflation pressures.”

“Companies are trying to figure out how hard they can push before they start losing people,” said Jeffrey Langbaum, an analyst at Bloomberg Intelligence. “And they seem to be of the opinion they can push as far as they want.”

Then, one month ago, we looked at the Apartment List data and to our horror, we learned that rents across the US had soared at the fastest pace on record, confirming that we are about to face a surge in rental prices which will push both core CPI and PCE levels far higher.

Fast forward to today when we got the latest confirmation that rents are exploding.

According to the July Apartment List National Rent Report, the national rent index increased by 2.3% from May to June, matching the largest single month increase ever recorded in AL estimates, which begin in January 2017.  It was also the fourth straight month in which that record has been broken, following a 2.3% increase in May, a 2.0% increase in April and a 1.4% increase in March. These are all sequential – not annual – increases!

According to the report, so far in 2021, rental prices have grown a staggering 9.2%. To put that in context, in previous years growth from January to June is usually just 2 to 3 percent. After this month’s spike, rents have been pushed well above the report authors’ expectations of where they would have been had the pandemic not disrupted the market.

That said, the data continue to exhibit significant regional variation, and there are still a number of markets where rents remain below pre-pandemic levels. But even in these markets, the trend has turned a corner. Rents in San Francisco, for example, are still 14% lower than they were in March 2020, but the city has seen prices increase by 17% since January of this year. At the other end of the spectrum, many of the mid-sized markets that have seen rents grow rapidly through the pandemic are showing that there’s still steam left in the current boom — Spokane, WA saw the nation’s fastest monthly rent growth in June (8.1 percent), and now prices there are up 31% since the start of the pandemic. 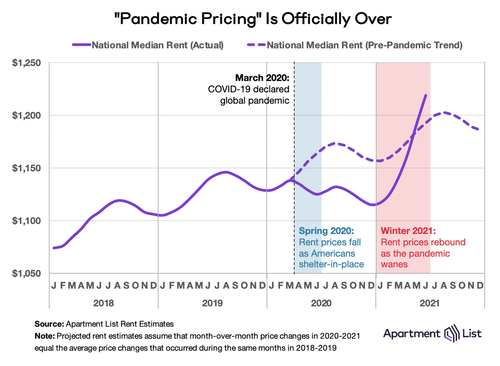 Many individual cities have also seen “pandemic pricing” come and go. This month, rents caught up with pre-pandemic expectations in a handful of major markets including Austin and San Diego. Meanwhile, prices remain below the pre-pandemic trend in some of the hardest-hit markets, like New York and San Francisco. Here, the lasting effects of the pandemic mean renters can still find apartments at discounted prices. 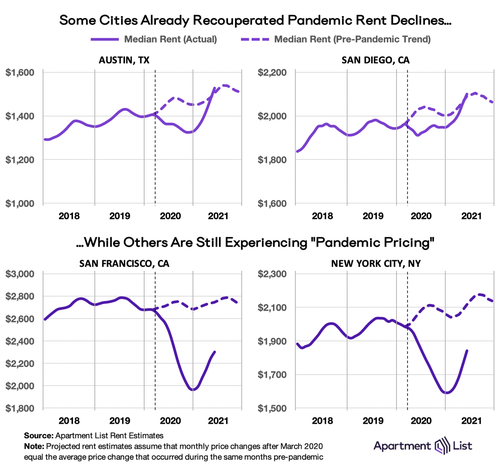 That said, in the markets where rents remain below pre-pandemic levels, prices are rebounding quickly. San Francisco consistently made headlines throughout the pandemic for the staggering 26.6% drop in rents from March 2020 through January 2021, but since January, San Francisco rents have increased by over 17%. Similarly, sharp rebounds have been observed in Seattle (+19% since January) and New York (+16%). The chart below shows these rent drops and rent rebounds, in the 10 cities with the largest gap between March 2020 and June 2021 prices. 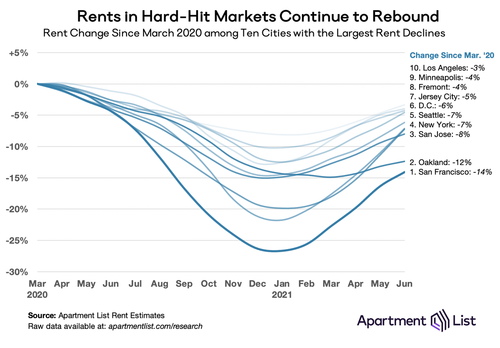 These COVID-era price fluctuations — down quickly at the start of the pandemic, up quickly since the start of 2021 — are significantly more volatile than the seasonal price fluctuations we are used to seeing in pricey rental markets. The chart below shows month-over-month price changes from 2018 to the current month. Monthly changes of +/- 2 percent are relatively rare under normal circumstances, but in 2020 and 2021 we have extended stretches where prices rise and fall at more than twice that rate. In Boston, monthly rent growth swung from -5 percent in November 2020 to +5 percent just six months later in May 2021. 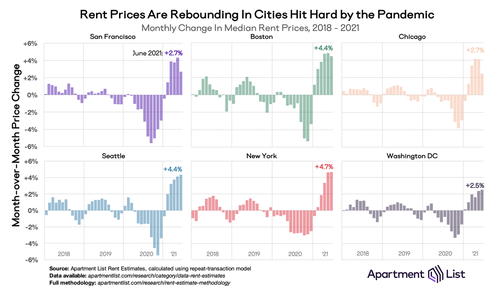 Meanwhile, as expensive coastal cities watched rents plummet throughout 2020, another group of mid-sized markets were heating up. The pandemic and remote work spurred demand for the space and affordability that these cities offered, and in response, rent prices grew even as the surrounding economy struggled. Even while rent declines in expensive markets have reversed course, the cities where rents have been growing fastest are continuing to boom. 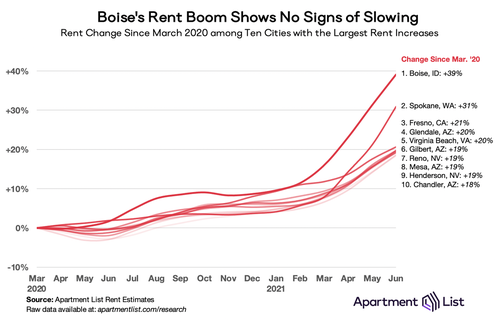 Leading the trend is Boise, ID, where rents grew another 6 percent in June and are now up 39 percent since the start of the pandemic. But the fastest single-month rent growth took place in Spokane, WA, where prices shot up 8.1 percent in June and sit 31 percent above pre-pandemic levels. After that, a handful of fast-growing cities have experienced roughly 20 percent price appreciation over the last year and a half. With the exception of Virginia Beach, VA, all of them are located in the Western United States, absorbing the rental demand overflowing from nearby, pricey metros like the San Francisco Bay Area and Greater Los Angeles.

The pandemic did not start a new trend in these markets, so much as accelerate an existing one. For example, from 2017 through 2019, rents in Mesa, AZ increased 25.5 percent, the fastest growth in the nation over that period. Similarly, Fresno, CA ranked third for fastest rent growth, while Chandler, AZ ranked sixth. This stands in contrast to what has happened in the expensive markets discussed above, for which the rent declines of the past year were a complete aberration. Given this longer-term context, as well as the continued upward trajectory in rent trends, it seems that Boise and cities like it have yet to hit their peaks.

Obviously, affordability has been a key determinant of whether cities are experiencing falling or rising rents during the pandemic. The relationship is made more explicit in the chart below, which plots rent levels against rent changes for the 50 largest cities in our data. There is a clear correlation between the two; the cities that had the highest pre-pandemic rents in March 2020 (moving right along the x-axis) have seen the steepest rent drops since then (moving down along the y-axis). 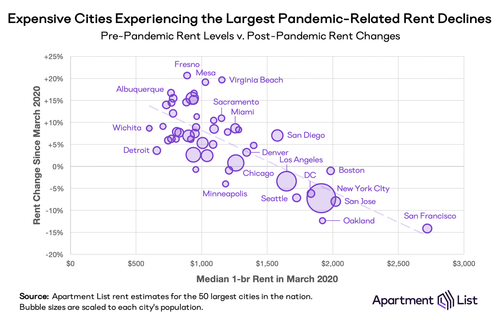 Meanwhile, more affordable cities have tended to see prices climb. This has led to a degree of convergence in rent prices across the country — the most expensive markets have gotten somewhat more affordable, while the most affordable markets have grown pricier. For example, last March, the median 2-bedroom rent in San Francisco was $3,146, which was 3.4x the $929 median for a 2-bedroom in Boise. As of this month, the 2-bedroom median in San Francisco has dropped to $2,695, while in Boise it has grown to $1,303, meaning that rents in San Francisco are now just 2.1x those in Boise. While still a significant price difference, the affordability gap has narrowed substantially, and even as rents in San Francisco have rebounded in recent months, Boise has continued to grow even faster.

Although the pandemic created some softness in the rental market last year, 2021 brought the fastest rent growth we have on record, and it is only a matter of time before rent inflation measured by the government catches up to the staggering prints observed by Apartment List. What is striking, is that in many individual cities across the country, rents have now surpassed the level where they would have been if rent growth had not been disrupted by the pandemic. And in markets like San Francisco and New York where “pandemic pricing” is still in effect, prices have turned a corner and are now rebounding. At the same time, booming markets like Boise continue to see prices climb. More broadly, rental inventory across the nation remains tight, and as vaccine distribution continues to gain momentum, we may be seeing the release of pent up demand from renters who had been delaying moves due to the pandemic. Whereas last year’s peak moving season was halted by the pandemic, this year’s seasonal spike appears to be making up for lost time. 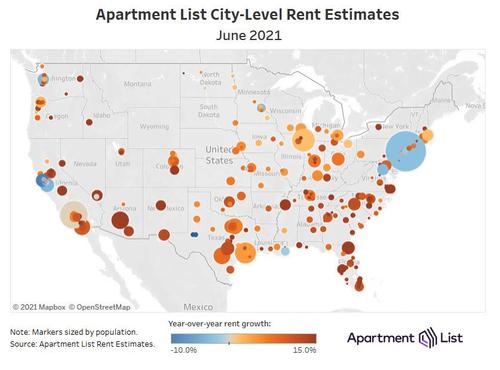 Summary: surging rents – the “missing link” from both the CPI and PCE baskets – are back with a vengeance, and the result is that no matter which official inflation metric one uses, we are about to see some truly epic inflation numbers in the coming weeks.