(ZeroHedge) Last month, when out of the blue we saw a sharp surge in a handful of gigacap names among which Amazon, which rapidly broke out of the range it had been trading in for the past year as a result of an aggressive bid in short-dated OTM calls, a move we dubbed Gammazon, we speculated that a key driver behind this move are retail investors who had moved away from their usual small and mid-cap stomping grounds and decided to target illiquid tech giants during the lowest volume season of the year.

Now that the data is in, it appears that we were right.

One flow indicator Panigirtzoglou looks to track the retail flow into US cash equities including ETFs is that constructed by his colleagues in Global Quantitative and Derivatives research, whose results are shown in the chart below. 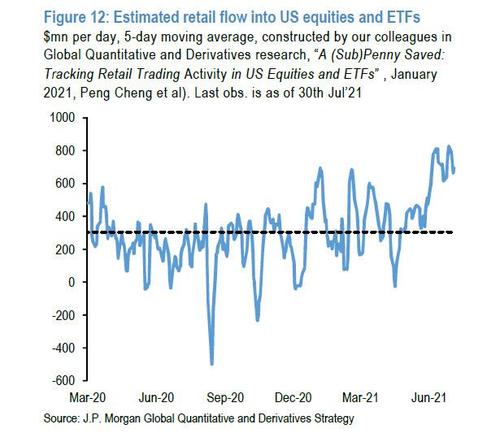 The estimated retail investor net flow into US equities and ETFs from this methodology has been hovering at a very high $700mn per day pace in recent weeks (including the week ending July 30th). As a result, the monthly net flow for the month of July rose to a new record high of $15bn, surpassing the previous record high of $10bn in June by 50%! 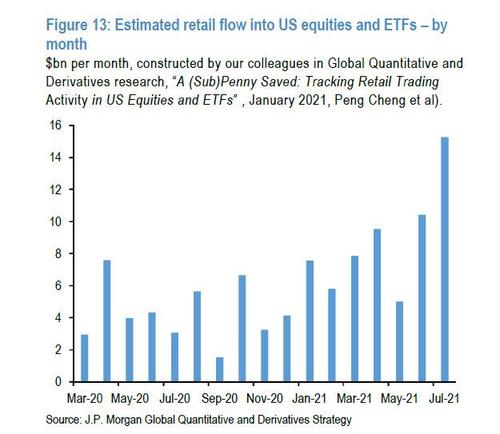 Here the JPM quant notes that it is likely that the actual net flow was likely bigger than this estimated $15bn for July  as the the estimated net flows shown above under report the actual net flow by at least a factor of 2 given the above methodology only captures market orders that receive price improvement, which account for about 45% of all retail volume. And retail investors’ gross flows into equities are even bigger, up to 20 times bigger than the net flows reported above. 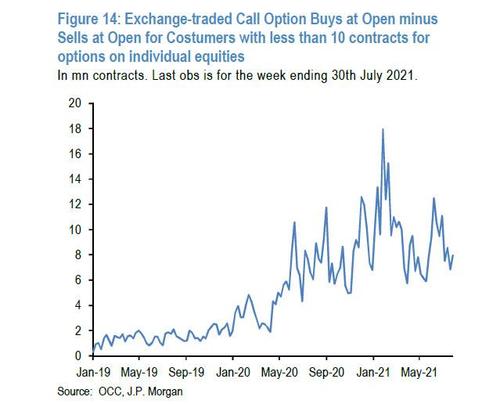 But while stock and ETF buying exploded to record highs in July, in contrast the buying of equity options remained muted in July as shown in the next chart.  In the options space, the most high frequency proxy of this US retail impulse is the one based on small traders equity option flows, i.e. option customers with less than 10 contracts (the data come from OCC, the world’s largest equity derivatives clearing organization). They are weekly, with the week ending July 30th as the last available observation. These small traders’ option flows for exchange-traded individual equity options in the US are shown below. After rising between mid-May and end-June, this option flow subsided in July.

Meanwhile, as DataTrek’s Nick Colas writes overnight, unlike previous bouts of the meme frenzy, retail traders are appear to be more level-headed this time around, with many still hurting from the unprecedented price swings in AMC and GameStop. Colas points to data from Fidelity which showed that while Robinhood was the most-traded company on Wednesday, the order flow was pretty even, with 32,000 buy orders from customers and 27,000 sells.

Colas concludes that his hope, “supported by the HOOD trading data, is that the current crop of traders have picked up some basic risk management skills (likely honed by trafficking in virtual currencies). Still, everyone’s a genius in a bull market so we will keep evaluating their behavior going forward.”

Meanwhile, judging by WallStreetBets sentiment, the retail trading frenzy – which previously focused on a handful of small and mid-cap highly shorted names – is now targeting on just one name: Robinhood. 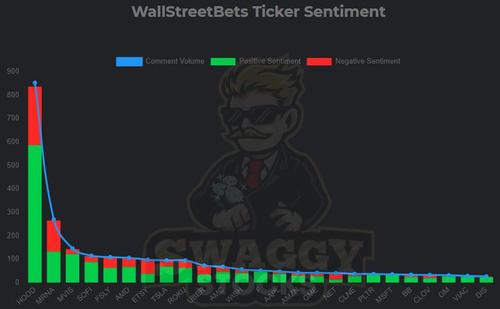 This means that the fate of HOOD, where option volumes have been simply staggering as a result of the historic gamma squeeze discussed earlier, will likely soon test Colas’ assumption that retail traders are now “astute risk managers.”

As for the $64 trillion question – is this activity indicative of a massive stock bubble – we leave that up to readers.