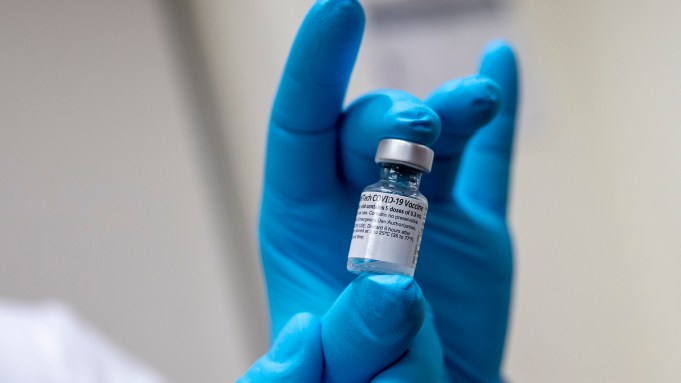 (Tom Tapp) The Los Angeles City Council voted 13-0 today to have the city attorney prepare an ordinance requiring people to show proof of at least partial vaccination against Covid to enter most public indoor spaces in the city, including restaurants, bars, gyms, concert venues, movie theaters and even “retail establishments.”

Council President Nury Martinez — who is in line take over as mayor once Eric Garcetti leaves — and Councilman Mitch O’Farrell introduced the motion last Wednesday.

“Why on Earth is it OK in 2021 to have 30 plus people die in the county of Los Angeles from COVID over a three-day period, including an 11-year- old girl, when we have a vaccine that could have prevented all of that, accessible to everyone,” O’Farrell said.

“This is not a vaccine mandate…we’re not going to deny anyone the ability to access essentials, food, medicine, etc., regardless of vaccination…but what is immoral is choosing not to get vaccinated, choosing to listen to some delusional rant on Twitter,” he added.

The ordinance would be similar to a policy recently announced in New York City, but would be more restrictive with the inclusion of retail establishments. The New York policy restricts access only to more entertainment- oriented venues such as restaurants, fitness centers and theaters.

City Attorney Mike Feuer has already endorsed the idea he calls “No shots, no admission.” In an article on Medium this week he wrote, “Those who reject that responsibility should temporarily lose some of society’s privileges until their reckless behavior no longer endangers the rest of us.”

The motion also instructed the chief legislative analyst to work with the Economic Workforce and Development Department and the City Attorney’s Office to decide what types of public spaces should be included using input from businesses, business organizations and council offices.

It also instructed the chief legislative analyst to work with the Community Investment for Families Department and the city attorney to solicit input from parents, parent groups, teachers, pediatricians and nonprofit organizations and businesses that deliver child care services to receive information on best practices for protecting children under 12 years old, as this age group is not eligible for the vaccine.

Several people called into the City Council meeting to oppose the potential ordinance, some claiming that the vaccines are deadly themselves, and others saying it was a form of “segregation” and comparing it to the Holocaust.

Councilman Bob Blumenfield, who said he was offended by the latter comparison, responded, “When you ask someone for their papers for the purpose of sending them to a death camp, that is the exact opposite of asking for proof of vaccination so we can save lives, it is the opposite.”

Council President Martinez said: “I want to be very clear about something, and I’ve heard this on social media and people who call in that they have a right to not access the vaccine or not get vaccinated. Unfortunately that argument just doesn’t work for me,” Martinez said before the vote Wednesday. “You not being vaccinated actually impacts the health of everyone else. So that argument that you have the right to not access the vaccine or get vaccinated just doesn’t work anymore.”

Councilman Paul Koretz similarly said, “Frankly I’m tired of our politicization of science and public health. And while people outside this building are protesting that this is a violation of their civil liberties, Angelenos are dying unnecessarily.”

Councilman Paul Krekorian said, “It is beyond me that this emphasis on personal rights and liberties somehow trumps — excuse the pun — every obligation of citizenship and concern about protecting the lives of our fellow Americans.”

He also urged the Los Angeles County Board of Supervisors to enact the same policy as Los Angeles so there is consistency across businesses in the area.

Councilman Joe Buscaino, who was absent from the vote along with Councilman John Lee, said in a statement last week, “We must do everything in our power to avoid another shutdown. The rapid increase in cases means that we have to use every tool available to protect our neighbors and our economy.”

The motion instructed the Community Investment for Families Department to report immediately on how to expand the Vax UP L.A. campaign and what resources are needed for a citywide outreach and education program in an effort to expand vaccine coverage.

The chief legislative analyst will work with other city departments to create an implementation strategy and the city attorney would report to council with a course of action for ensuring compliance.

County health officials continue to urge vaccinations as the best defense against COVID-19 infections, which are disproportionately affecting the unvaccinated and landing them in hospitals.

The county reported another 2,622 COVID-19 infections on Tuesday, raising the overall total from throughout the pandemic to 1,331,859. Another 22 deaths were also reported, raising the county’s COVID death toll to 24,805.

The number of people hospitalized due to COVID rose to 1,648 as of Wednesday, with 360 people in intensive care. Ferrer said the hospital patients are overwhelmingly unvaccinated, at about 90%. Between April and July, 96% of the people who died from the virus were unvaccinated, she said.