While it won’t come as a surprise to those who keep tabs on the monthly Case-Shiller data, where the latest Top 20 City Composite Index rose a record 17% in May, and which showed that every metro area in the US saw double digit Y/Y price gains… 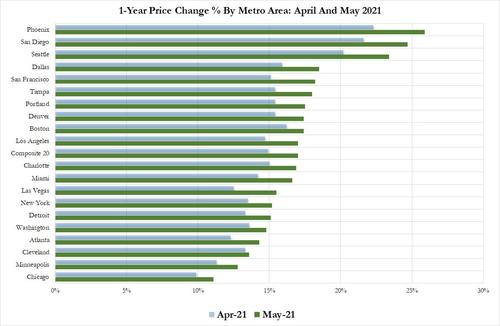 … today the NAR reaffirmed that US home prices are rising at the fastest pace on record, with the median price of an existing single-family home soaring 22.9% in the second quarter from a year earlier to an all-time high of $357,900 an increase of $66,800 from one year ago as a result of surging demand due to “continued low levels of housing inventory, combined with record-low mortgage rates”; the result was an increase in existing home prices in all but one of 183 measured markets during the second quarter of 2021.

While all regions saw double-digit year-over-year growth, the Northeast region led gains with a 22% rise; the South followed with 21.0%, West was third at 20.9%, and the Midwest was last with “only” a 17.1% price increase. Among metro areas, values rose the most in Pittsfield, a Western Massachusetts town 40 miles from Albany, New York. The median price there was $321,900, up 47% from a year earlier. It was one of 12 areas nationwide with increases of more than 30%, the other 11 were:

The only metro area with a decrease was Springfield, Illinois, where prices fell 7%.

“Home price gains and the accompanying housing wealth accumulation have been spectacular over the past year, but are unlikely to be repeated in 2022,” said NAR chief economist Larry Yun, who clearly does not understand that $120BN in monthly liquidity injections by the Fed mean that the price increases will only accelerate.

“There are signs of more supply reaching the market and some tapering of demand,” he continued. “The housing market looks to move from ‘super-hot’ to ‘warm’ with markedly slower price gains.”

But while this latest housing bubble, again spurred by the Fed’s actions as artificially record low mortgage rates have stoked the US housing market for more than a year leading to a shortage of inventory and record high prices, we are finally seeing some pushback as sales of previously owned homes in the U.S. fell for a fourth straight month in May and the rebound in June missed expectations… 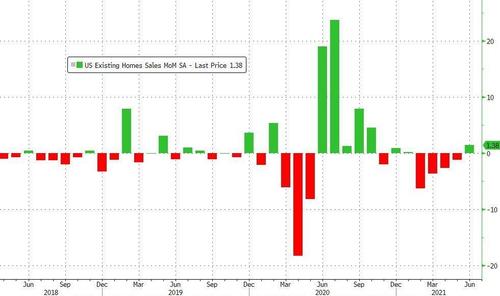 … while homebuilder sentiment has slipped to an 11-month low as increasingly more balk at lifting never before seen offers. 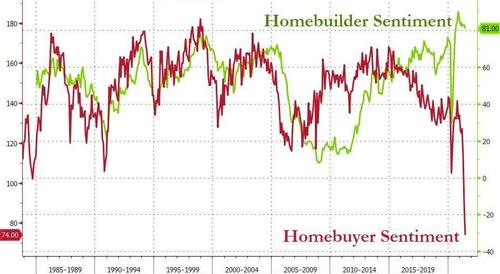 The bottom line: yes, record home prices is great for existing homeowners but is terrible news for those looking for their first home to buy as U.S. housing has never been more unaffordable. With home prices rising, the monthly mortgage payment on an existing single-family home financed with a 30-year fixed-rate loan and 20% down payment rose to $1,215. This is an increase of $196 from one year ago, even as the effective 30-year fixed mortgage rate3 decreased to 3.05% (3.29% one year ago). Among all homebuyers, the monthly mortgage payment as a share of the median family income rose to 16.5% in the second quarter of 2021 (14.0% one year ago).

“Housing affordability for first-time buyers is weakening,” Yun explained. “Unfortunately, the benefits of historically-low interest rates are overwhelmed by home prices rising too fast, thereby requiring a higher income in order to become a homeowner.”

The insanity in the housing sector has pushed prices so high, the median existing home now costs more than a new home, an unprecedented inversion. 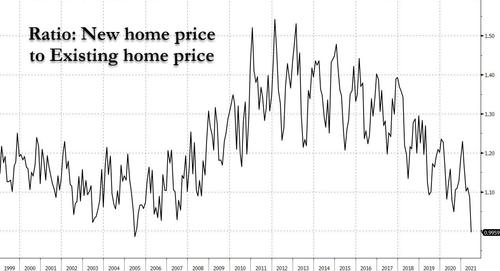 So just how unaffordable is housing? Well, among first-time buyers, the mortgage payment on a 10% down payment loan jumped to 25% of income (21.2% one year ago). A mortgage is affordable if the payment amounts to no more than 25% of the family’s income.

“Housing supply will be critical in moderating the growing housing costs and rising rents,” Yun said. “Any disincentive to produce more housing inventory, such as extending the eviction moratorium, will only worsen the current shortage,” Yun said.

Oh and for those hoping to escape the hyperinflation in the housing market by renting, sorry – you are out of luck: rents are also soaring at the fastest pace on record!

So as that “cheap gas champion” Joe Biden calls OPEC to force more production (after intentionally crippling domestic oil production to appease his progressive green crusaders), maybe he can call Blackstone and Blackrock next and ask them to cut housing prices just a bit before the next housing bubble bursts with catastrophic consequences for everyone.