The closely watched supply and demand report slashed estimates for corn yields and stockpiles. World inventories for wheat were reported near a five-year low.

Grain and oil seed futures soared to a near-decade high earlier this year but have been in a holding pattern for the last month, awaiting new reports on the outlook for upcoming U.S. harvests. A megadrought and back-to-back heat waves have plagued the corn belt and the U.S. West for much of the summer.

December corn futures were up more than 2% to $5.7150 a bushel on the Chicago Board of Trade, soybean futures popped on the report and are now flat at the end of the U.S. cash session, wheat futures rose more than 3%, hitting a fresh eight-year high.

The Bloomberg Grains Index closed up 1% on the report. 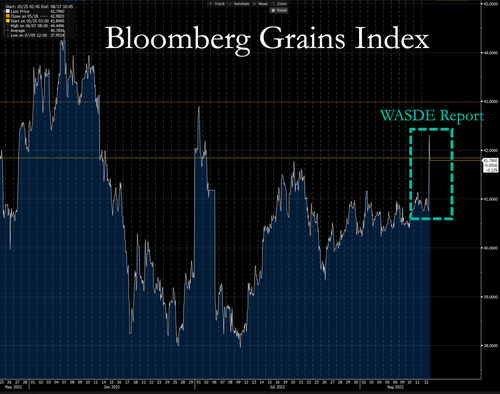 Bloomberg outlines the key takeaways from the August WASDE report:

This report means that adverse weather conditions are another driver of food inflation that shows no signs of stopping. We noted not too long ago, grocery store prices were expected to rise through the fall. Earlier this week, Tyson Foods Inc. said the surge in raw materials costs would force them to raise food prices in the coming weeks.