Now that the global energy crisis has slammed China’s economy, leading to the first contractionary PMI since March 2020 as a result of widespread shutdowns of factory and manufacturing, not to mention hundreds of millions of Chinese residents suffering from periodic blackouts, Bloomberg reports that China’s central government officials “ordered the country’s top state-owned energy companies to secure supplies for this winter at all costs.”

The news follows a report on Wednesday that China will allow soaring coal prices to be passed on to factories in electricity prices. But prepare for a surge in PPI, which will likely not be allowed to be passed on to CPI due to ‘common prosperity’. Which logically means margin collapse, and shutting down – so even more structural shortages. Unless we get state subsidies of some sort, or differential pricing for the foreign and domestic market. There used to be a name for that kind of economy. Wall Street used to pretend it didn’t like it. 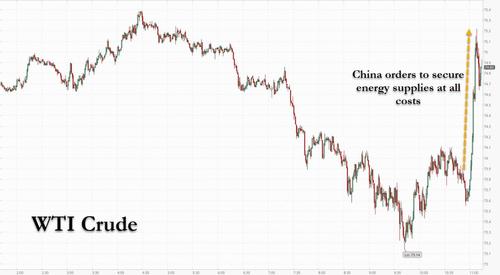 According to Bloomberg, the order came directly from Vice Premier Han Zheng, who supervises the nation’s energy sector and industrial production, and was delivered during an emergency meeting earlier this week with officials from Beijing’s state-owned assets regulator and economic planning agency. The bottom line, according to Bloomberg sources, is that “blackouts won’t be tolerated.”

Which simply means that the supply chain bottlenecks are about to get even worse since China will muscle in even more aggressively for what little coal and LNG supply there is. It is unclear if it also means that Beijing is about to give up on its laughable pursuit of decarbonization.

The emergency meeting underscores the critical situation in China. A severe energy shortage crisis has gripped the country, and several regions have had to curtail power to its industrial sector and some residential areas have even faced sudden blackouts.

In a sign of how worried Chinese officials are, Premier Li Keqiang vowed overnight that every effort will be taken to maintain economic growth. China will ensure the needs of basic livelihoods are met and will keep industrial and supply chains stable, Li was cited as saying by China National radio during a meeting with foreign diplomats Thursday.

The bottom line is that China finally hit the limit of how much slowdown it is willing to tolerate and Beijing is about to unleash a monetary and fiscal stimulus tsunami. It also means that commodity prices are about to absolutely insane this winter.