China’s factory-gate prices grew at the fastest pace in almost 26 years in September, adding to global inflation risks and putting pressure on local businesses to start passing on higher costs to consumers.

The producer price index climbed 10.7% from a year earlier, the highest since November 1995, data from the National Bureau of Statistics showed Thursday, far higher than the 9.5% gain in August and hotter than the 10.5% expected. 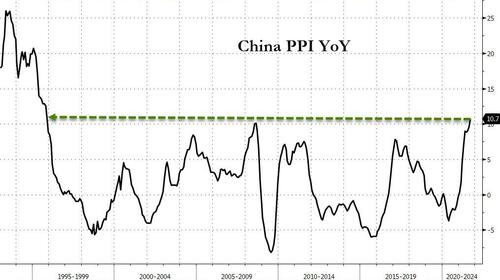 On the other hand, consumer prices rose 0.7% last month from a year earlier, lower than a 0.8% gain in the previous month., but Bloomberg notes that for now consumer inflation remains in check because of falling pork prices, even though the removal of most virus controls by the end of September may have helped to boost household spending.

“The widened gap between PPI and CPI means greater pressure for upstream sectors to pass on rising costs to the downstream,” said Bruce Pang, head of macro and strategy research at China Renaissance Securities Hong Kong.

And, as we previously warned, the situation is about to get much, much more serious. If the historical correlation between Coal prices and PPI holds, were may be soon looking at a tripling of China’s PPI, which from 10.7% Y/Y in September, is about to soar to 30% or more. 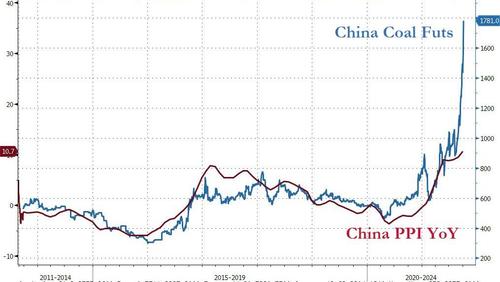 Needless to say, if Chinese PPI does hit 30%+, even if CPI somehow stay in the single digits, the results would be catastrophic: profit margins would collapse, the plunge in already thin cash flows would lead to even more defaults and supply chain bottlenecks, even as the scramble to obtain commodities “at any price” keeps pushing costs – and PPI – even higher.

Meanwhile, if producers do try to pass on some of the costs and CPI spikes (the gap between CPI and PPI was already at record wide before the recent surge in coal prices) as it did in the early 90s… 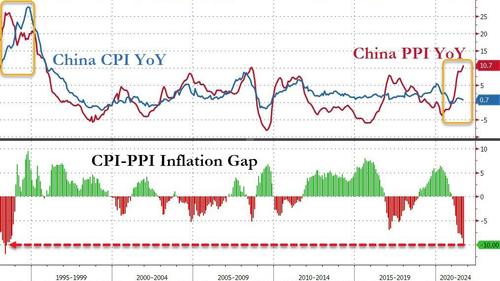 … then Beijing will have social unrest on its hands.

There are early signs that producers are starting to pass on higher costs to consumers: the largest soy sauce maker in the country said this week it plans to raise retail prices of its products. At least 13 companies listed on China’s A-share market have announced price hikes this year to address rising costs and tight supply, China Securities Journal reported Thursday.

And all this is happening as China’s property sector desperately needs a massive liquidity infusion which is – you guessed it – inflationary.

And while China may be facing its first “galloping inflation” PPI print since the early 90s, it’s only downhill from there, because as Citigroup wrote over the weekend, power cuts (with over 20 provinces, making up >2/3 of China’s GDP, have rolled out electricity-rationing measures since August) and contractionary PMI “seem to suggest China could enter into at least a short period of stagflation.”

“We think the risk of stagflation is rising in China as well as the rest of the world,” said Zhang Zhiwei, chief economist at Pinpoint Asset Management Ltd.

And so, Beijing is now trapped: if it eases, inflation – already at nosebleed levels – will soar further crushing margins and sparking a deep stagflationary recession; if it does not ease, the property market – already imploding – will crater.