Over the weekend,ZeroHedge reported that in the aftermath of last week’s staggering, 6-sigma bond moves which saw unprecedented surges in short-term rates everywhere from Australia, to Canada and the U.K. amid growing speculation that the world’s central banks will accelerate plans for raising interest rates in the face of persistent inflation…

… Bear Traps report author Larry McDonald warned that “we are hearing 10 to 20 different asset managers across the industry are being liquidated or are under review for liquidation due to interest rate derivatives, it’s a bloodbath.”

And while we have yet to uncover a fund that was forced to turn off the lights one final time in the past 72 hours moments ago Bloomberg reported that the P&L losses piled up for some of the largest, most respected asset managers, “and for a few became so big that the firms halted some trading to contain the damage.”

According to the report, such hedge funds titans as Balyasny Asset Management, ExodusPoint and even bond specialist, BlueCrest, curtailed the betting of two to four traders after they hit maximum loss levels. The move stopped traders from unwinding or reversing their positions, an “extraordinary” risk-management move used so firms can reassess trades or unwind them.

Meanwhile, multi-strat giant Millennium also suffered amid the tumult and is continuing to monitor its macro portfolio managers’ trades, Bloomberg’s source said (clearly they are quite familiar with the fund’s nightmarish risk management back office). Meanwhile, Point72 Asset Management’s macro business was said to see some losses from the bond-market moves. Incidentally, both Millennium and Point72 – along with Citadel – were among the funds we highlighted over the weekend as having traditionally been most actively exposed to Treasury basis swap trades; in fact, it is these repo trades that have led these macro hedge funds to sport regulatory leverage in the hundreds of billions of dollars.

The names listed above are new, and come in addition to the ones we already were aware of: as a reminder, Bloomberg previously reported that macro giants Rokos and Alphadyne suffered huge losses; in the case of the former, losses worsened to 20% through Oct. 22 this year, in part because of wagers that the yield curve would steepen. Similarly, Alphadyne Asset Management, which has never had a down year since it started up in 2006, had lost 13% during the period also due to the violent curve flattening.

Another hedge fund that got steamrolled is Frost Asset Management, which slumped almost 18% last month largely due to the sharp rise in Swedish short-term interest rates and flatter yield curves, according to the fund’s backer Brummer & Partners AB.

These painful hits show how everyone is subject to huge pain if they rely on central bank forward guidance, only for the same central banks to abruptly realize they were wrong all along and their central planning was a failure. It’s unclear how much these hedge funds will drag down the hedge funds’ returns, and while they could be offset by the stock rally that’s driven the S&P 500 to new record highs, we expect the total damage to be in the tens of billions as these are extremely levered trades, and in the cases of Citadel, Millennium and Point72, regulatory leverage is some 5x the fund’s underlying assets. 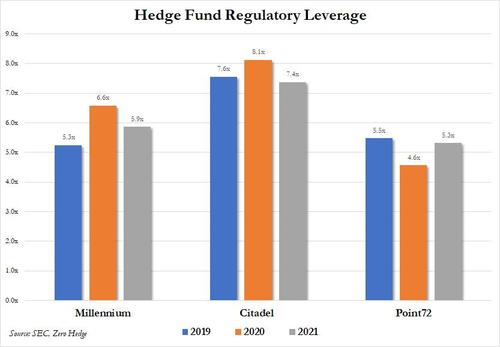 Ahead of last month’s fireworks, most if not all hedge funds had been betting (billions) that central banks would be slow to raise interest rates, seeing the surge in consumer prices as a temporary side-effect of the pandemic. But that view was jettisoned as hawkish comments from the Bank of England cemented expectations for a rate hike, the Bank of Canada shut down its bond buying program and Australian policymakers abandoned their yield curve control. In the U.S., where the Federal Reserve is widely expected Wednesday to announce plans for winding down its bond purchases, markets are now pricing in two rate hikes by December 2022. In an abrupt reversal, Goldman – which until recently had been one of the most dovish Wall Street banks – pulled forward its estimate for a first rate hike by more than a year to July, just a month after the taper ends.

This hawkish reversal upended levered steepener trades; in the U.S., the difference between two- and 10-year Treasury yields flattened by 13 basis points Wednesday, marking one of the biggest one-day moves in the yield curve since 2000, according to Cornerstone Macro’s estimates.  That came as the two-year Treasury yield almost doubled last month to about 0.5%. According to Bloomberg, an upward move hadn’t approached that degree since December 2009, when the two-year yield jumped to about 1.14% from 0.66%.

Meanwhile, since the start of the year, the 5s30s curve has collapsed by more than half… 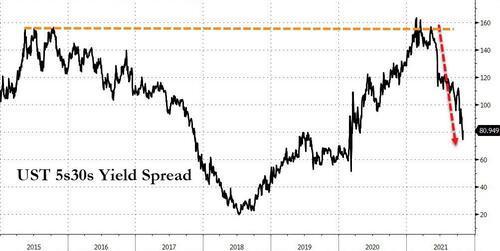 … as bond markets start to sniff out the next policy error-driven recession. We wonder just how big the market carnage will be when, some time in 2022, the smartest men in the room realize that the US economy has been contracting for much of Biden’s presidency.