On Monday we reported that Zillow Group had ‘halted‘ it’s AI-powered house-flipping operation after 93% of homes listed in their Phoenix portfolio are underwater, and is scrambling to unload 7,000 homes for $2.8 billion.

Today, the company announced during earnings that it’s going to reduce its workforce by 25% and completely scrap its home-flipping operation which began buying homes in December 2019.

The decision comes after the company lost more than $380 million on the program called Zillow Offers – which hit a major snag in recent months after the algorithm monumentally overpaid for houses right as the US real estate market began to cool.

Zillow plans to take writedowns of as much as $569 million, according to Bloomberg.

The stock, needless to say, is not happy after hours – dropping as much as 10% in extended trading, only to see buyers reel it in to flat as of this writing. 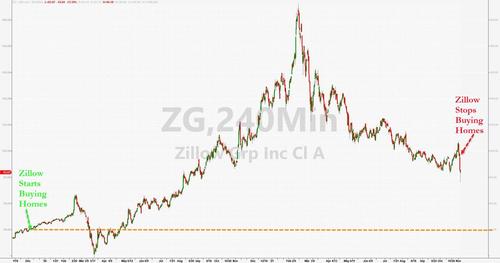 In September, Zillow put a record number of homes on the market – with the lowest markups since November 2018 according to research firm YipitData, which also noted that the company had cut prices on almost half of its US listings in the 3rd quarter.

In the second quarter, Zillow bought over 3,800 houses towards their stated goal of acquiring 5,000 homes per month by 2024.

In Phoenix, 36.5% of properties currently for sale were listed below their purchase price, while the remainder of the 93% started higher, only to have price reductions.