Two weeks ago Zerohedge reported that Zillow’s electronic house flipping operation had been underperforming – as the real estate company had been buying houses at inflated prices and flipping them for a loss.

In Phoenix, Arizona – Zillow’s second-largest portfolio after Atlanta – things are worse than we thought. According to an analysis by Insider, 93% of the homes Zillow bought to flip are now listed at less than what they paid.

Insider reviewed all the homes for sale by Zillow in the Phoenix metropolitan area as of October 27. Out of 224 homes, 208 — or 92.9% — were priced below what Zillow paid. The potential losses highlight the risks of the iBuyer business, which aims to buy and resell properties for a profit in a roller-coaster market.

After purchasing 5,661 homes across 25 metropolitan areas from Austin to Tucson since the beginning of 2021, Zillow announced on October 17 that it would stop buying homes for the remainder of 2021. Chief Operating Officer Jeremy Wacksman said the pause was because of “an operational backlog for renovations and closings” that he blamed on “a labor- and supply-constrained economy inside a competitive real estate market.” -Insider

What’s more, while most of the Zillow sales were first listed at more than they paid – eventually receiving price cuts that brought them into the red, 36.5% of properties were listed for less than the company first paid. Just 16 homes were listed above Zillow’s purchase price – and all  16 were listed within the last two weeks, meaning they have yet to experience meaningful price cuts.

In short, Zillow is having issues clearing out its existing inventory and just needs it moved. As Insider notes, if the company sold all of it’s Phoenix homes right now at their current list prices, it would lose $6.3 million dollars. Right now, their median loss per home in the area is nearly $29,000.

Given that the Case-Schiller index indicates Phoenix real estate is still on fire, this may simply boil down to Zillow’s out-of-control ‘AI’ getting off on outbidding plebs in a greedy bet on unlimited growth. 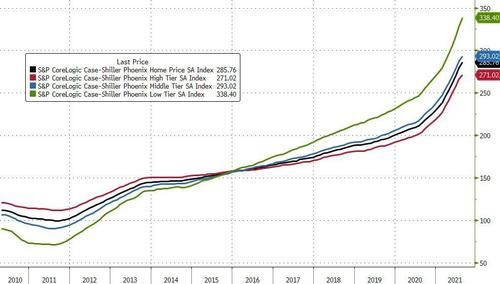 Launched in 2017, Zillow’s iBuying arm uses a wide array of real-estate data with the goal of quickly and efficiently acquiring properties to flip for a profit. The program has vacuumed up properties across the country to flip, only to be met with fierce competition from services such as Redfin, Offerpad and Opendoor. And according to iBuying analyst Mike DelPrete, Zillow’s competitors aren’t having the same problems – with Opendoor’s median home priced $4,400 above what they paid (which, quite frankly, is also pretty terrible).

Zillow reports earnings on Nov. 2, so might be an interesting call to check out to say the least.