Over the past few months we have repeated a statement which – because it is controversial and because it is true – sparked feigned outrage among the financially illiterate macrotourists (which these days is the vast majority of the financial commentariat): we said that in light of the galloping inflation which has crushed BIden’s approval ratings and has ensured a landslide loss for Democrats in the midterms, the Fed desperately wants to create a recession (and, at this rate, it will get it).

Fed wants recession. It will get it in a few months.

Today, our tinfoil conspiratorial theories once again were validated today when none other than JPMorgan’s European economists admitted that…

The BoE has an inflation problem, and resolving it likely will require an uncomfortable adjustment. While most of the current overshoot will be transitory due to the unusually high contribution of energy and other goods prices, the labor market continues to tighten rapidly and is causing increasing concern about where inflation will settle over the medium term.

While the rest of the note is self-explanatory, it’s notable that even JPM admits that mere stagnation, i.e. a “soft landing”, is no longer sufficient:

Even a GDP stagnation may not be enough: Based on these model results we run simulations for the unemployment rate under several alternative GDP growth scenarios. These are only illustrative and are based on past behavior. But they suggest the labor market will remain tight in the absence of a very weak growth outturn. Our own weak growth scenario anticipates output rising at an annualized pace of just 0.5% in 2H22. However, given we expect growth in the surrounding quarters to be above 1%, lags in the model leave the unemployment rate in this scenario still falling to 3% by the end of 2023 (Figure 3). 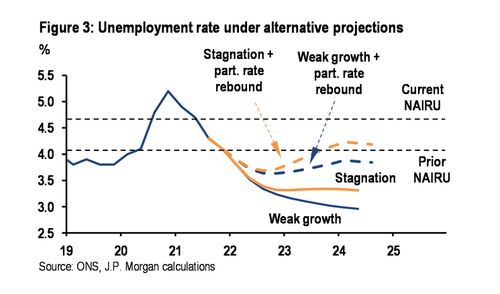 A one year stagnation in GDP from 2Q would push the unemployment rate higher, but only by 0.3%-pt. given that GDP would be running just a percentage point lower than 1%. This would leave the labor market still looking very tight, even by pre-pandemic standards when the NAIRU was thought to be closer to 4%. Under a weak growth scenario that assumes the participation rate fully reverses its pandemic decline by the end of next year, the unemployment rate rises but remains below 4%. A stagnation with a participation rate rebound would return the unemployment rate to its pre-pandemic NAIRU, but this might still leave the market tight if increased frictions remain.

The bank’s conclusion: “a recession would be required to ensure the labor market is equilibrated, and that would need to involve a loss of confidence and business retrenchment rather than a technical contraction entailing a brief period of falling GDP.“

Of course, it’s not just the BOE – it’s every other “western” central bank too, and we are confident that JPM will eventually figure that out as well. Incidentally, stocks already have, with markets pricing in three rate CUTS after 2023 when the “hard landing” recession hits, and the Fed starts its next easing cycle. 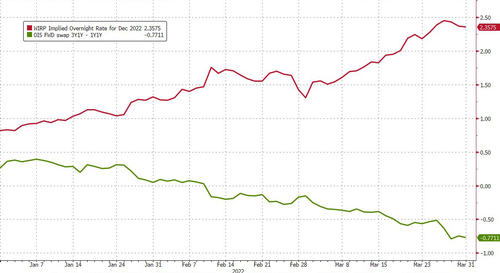 Which is also why stocks so stubbornly refuse to tumble: after all, why sell now when the Fed will soon launch another QE and brings rate back to zero, if not negative, sending risk assets to new all time highs. Well, the answer is that unless stocks crash, the Fed will never get the green light to pursue the extremely aggressive easing that will follow the next recession, which is why we may be stuck in risk asset limbo for a long time.

How The West Was Lost – A Faltering
World Reserve Currency