Over the last several weeks, readers have become aware of an emerging housing affordability crisis as US mortgage rates continued their near-vertical ascent, risks jeopardizing the housing market boom. The 30 Year fixed mortgage rate has jumped a staggering 177bps this year, reaching the highest since 1Q10, with Bankrate data showing mortgage rates are above 5%.

As discussed in March, “Housing Affordability Is About To Crash The Most On Record“ and “Biggest Housing Affordability Shock In History Incoming,” new data suggests that the red-hot housing market is beginning to crack as new listings increase and sellers reduce asking prices.

Realtor.com reports new listings last week rose 8% from a year ago. This comes after four consecutive weeks of annual declines in listings. There is still a housing market shortage as active inventory for sale is down 13% from a year ago but could soon reverse as more supply is added. Seasonal trends show new listings peak around May.

As more supply comes online and soaring mortgage rates spark an affordability crisis, in a separate report, Redfin notes that sellers are lowering their asking prices. About 12% of home sales had a price drop during the four weeks ending April 3. That’s a 9% increase compared to the same period a year ago. The rate of sellers dropping their asking prices is accelerating.

“Price drops are still rare, but the fact that they are becoming more frequent is one clear sign that the housing market is cooling,” said Daryl Fairweather, Redfin’s chief economist.

“It goes to show that there’s a limit to sellers’ power. There is still way more demand than supply, and buyers are still sweating, but sellers can no longer overprice their home and still expect buyers to clamor at their door,” Fairweather said.

Realtor.com and Redfin data could be some of the first evidence the housing market is cooling as a rate shock could produce more turmoil in the second half of this year.

BofA economist Alex Lin recently showed clients that housing affordability is at the lowest since 2007, about a year before the housing bubble imploded. 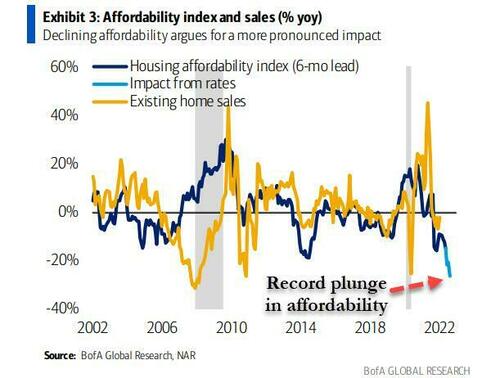 What does this affordability shock mean for actual home prices, sales, and the coming recession?

According to Lin, housing affordability tends to lead the trajectory of existing home sales by about half a year.

The question is – given the smoothing and delays in Case-Shiller’s data series – what happens next? Maybe mortgage rates provide some ideas… 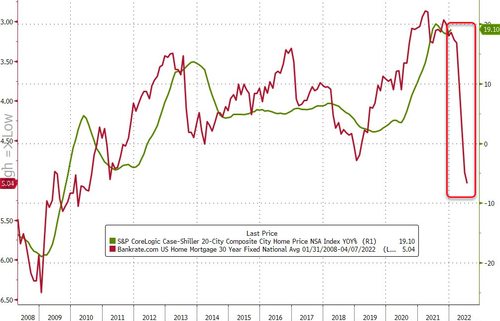 The hit to affordability is just one piece of the puzzle. Now supply is building as sellers drop prices, potentially painting an ominous outlook for the housing market.