As the virus pandemic upended life last year, pricey cities across the US experienced rapid declines in rent prices and widespread concessions. The COVID-19 vaccine rollout, reopening the economy, and higher employment have brought some people back to cities searching for rentals.

Now, US rents are beginning to move higher. Median US asking rent rose 1.1% on an annual basis in March to $1,463 a month across 50 of the largest metro areas, according to WSJ, citing a Realtor.com report. 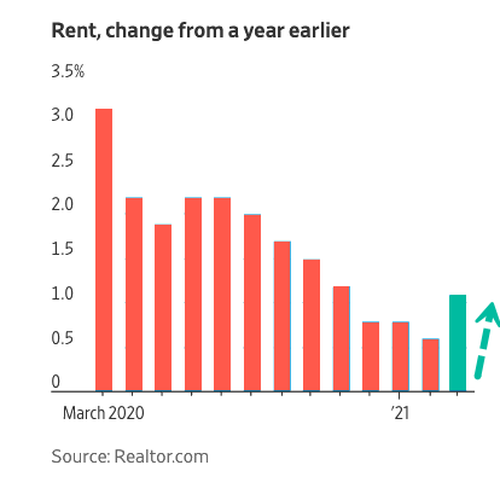 END_OF_DOCUMENT_TOKEN_TO_BE_REPLACED

After a steady march higher in the wake of the ‘great recession’ nearly a decade ago, a note today from Rent Cafe reveals that average rents in the United States have now stalled for 4 months in row with September’s national average coming in at $1,354 per month, which is virtually flat from the $1,350 average reached in the summer.

National rents have barely moved through the entire peak rental season and into September, marking the longest period of stagnation in recent history — 4 consecutive months. Coming in at $1,354 for the month of September, the average rent is only 2.2 percent higher than this time last year. This is the slowest annual growth rate we’ve seen in more than six years — having reached a high point of 5.5%-5.6% peak growth around two years ago — a pretty good indicator that the rental market has entered calmer waters.

Still, that doesn’t mean rents have flat-lined everywhere. Though nationally and in the most expensive cities for renters prices have finally come to a full stop, there are still some holdouts—and it seems renters in smaller and mid-sized cities are not yet getting a break, on the contrary.

As we pointed out over the summer, just like almost any bubble, stagnating rents are undoubtedly the symptom of a massive, multi-year supply bubble in multi-family housing units sparked by, among other things, cheap borrowing costs for commercial builders.  Per the chart below from Goldman Sachs, multi-family units under construction is now at record highs and have eclipsed the previous bubble peak by nearly 40%.

But, while rents are certainly slowing – and construction is indeed playing its part – the impact isn’t spread evenly across all markets as Rent Cafe notes that the construction boom in Texas has earned the state 6 out of 10 of the worst performing rental markets in the country.

The anticipated rent drops from Hurricane Harvey have not been realized in the city of Houston, but are seen in other Texas communities, with the biggest changes being outside of Harvey’s reach, as a result of the major apartment construction taking place throughout the state. Lubbock, located on the west side of the state, came in at No. 1 for biggest year-over-year rent decreases in the nation, with rents dropping 3.4 percent since 2016.

Rents for apartments in Round Rock, a suburb outside Austin—another city barely touched by Harvey, dipped to $1,092—3.4 percent below last year’s numbers. Round Rock took the No. 2 spot for biggest rent decreases of the year.

Texas claimed the third spot, too, with McAllen’s 2.6 percent drop in rents since last year, and three other Texas towns—College Station, Waco and Plano—also made the top 10, with decreases of 2.4 percent, 2 percent, and 1.1 percent, respectively. The rest of the list was spread throughout the nation, with California’s Simi Valley taking No. 4 (down 2.6 percent), New Orleans at No. 5 (down 2.4 percent), Manhattan, NYC at No. 8 (down 1.9 percent), and Tulsa, Oklahoma at No. 9 (down 1.5 percent.)

Though smaller and mid-sized towns used to be a haven for renters looking to avoid the sky-high prices of large urban areas, it seems those days are in the past. September’s list of fastest-growing rents is dominated by small and medium-sized towns—many boasting double-digit growth since this time last year.

The Lone Star State’s Odessa and Midland—both hubs of oil and gas activity—came in at the top two spots, with jumps of 24.7 percent and 20.7 percent, respectively. Odessa rents now clock in at $1,060 per month, while Midland’s reach even higher, coming in at $1,225.

The rest of the nation’s fastest-growing rents can be found largely on the West Coast, with California, Washington, Nevada and Colorado taking up the remaining bulk of the list. The only Northeastern cities to see big year-over-year rent growth were Buffalo, New York, with an 11.2 percent jump over 2016, and Elizabeth, New Jersey, which saw rents climb 8.5 percent to $1,187.

Finally, here are the top 10 most and least expensive rental markets in the U.S. at the end of September 2017. To our complete lack of surprise, New York and California continue to dominate the expensive list while Southern and Midwestern markets continue to provide the best value…perhaps this is why all those domestic migration studies show a mass exodus from the cities on the left to the cities on the right? Just a hunch…