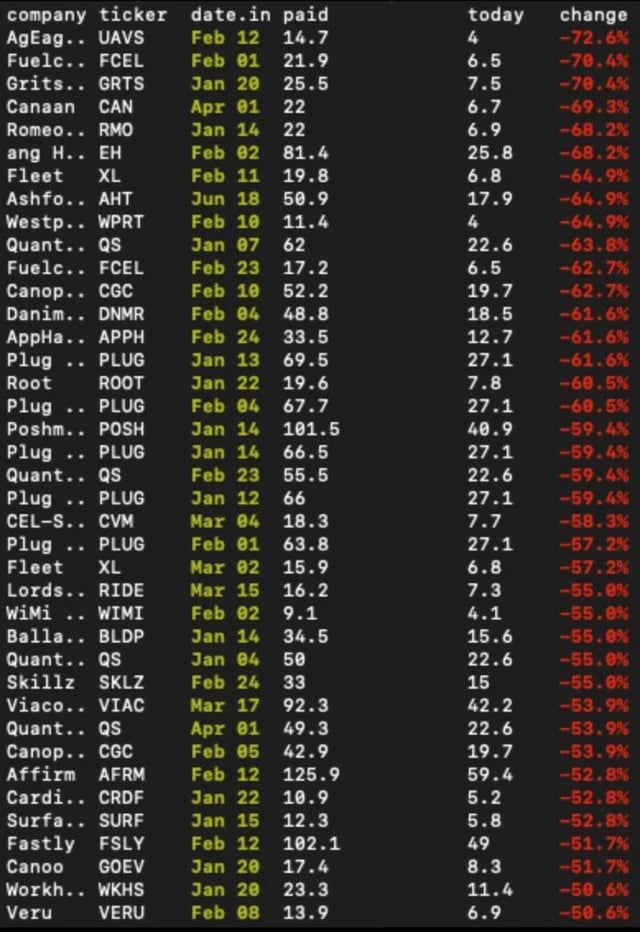 Jim Cramer also has some medical advise for you too…

Two newly public tech companies reported earnings on Thursday, and both were ugly for their investors.

Meal-kit preparer Blue Apron missed earnings expectations by a wide margin in its first earnings report since going public in late June. It reported a 47 cent per share loss instead of the expected 30 cent loss, blaming high customer acquisition costs and staffing a new distribution plant in New Jersey.

The stock dropped 17 percent and is now trading at about half its IPO price.

In its second earnings report as a public company, Snap disappointed Wall Street with its user growth numbers for the second consecutive time and fell short on earnings.

The stock dropped about 17 percent after hours. It’s now off about 33 percent from its IPO price.

Blue Apron and Snap have a lot in common. They’re consumer focused. They have devoted followers. They’re losing money hand over fist.

And both were targeted directly and aggressively by two of tech’s biggest companies.

Between the time Blue Apron filed for its intial public offering, on June 1, and when it went public, on June 28, Amazon announced that it was buying Whole Foods. The speculation that Amazon would use the purchase to improve its home delivery service sent demand for Blue Apron’s IPO down, and the company slashed its IPO range from $15-$17 down to $10-$11.

Then, reports emerged that Amazon had already launched a meal kit, which was on sale in Seattle.

In the case of Snap, it was Facebook. Mark Zuckerberg and company had been fighting to blunt Snap’s growth ever since its co-founder, Evan Spiegel, rejected his buyout offer in 2013. It began to see progress with the launch of Instagram Stories in August 2016, which duplicated Snapchat’s own Stories feature. Over the next year, it gradually copied nearly every major Snapchat feature in its own products.

Less than a year after launch, Instagram Stories has 250 million daily users and is growing at a rate of around 50 million every three months. Snap has 173 million and grew only 7 million during the quarter.

The experiences of these companies are discouraging for start-up investors and founders who dream of someday creating an Amazon or Facebook of their own.

They also need to satisfy Wall Street’s appetite for growth, which means they have to get new customers or earn more money from existing customers, quarter after quarter, year after year. One way to do that is to expand into new markets.

They’ll gladly outspend their smaller competitors on product development and hiring while undercutting them on price.

That doesn’t mean curtains for Blue Apron or Snap. Both companies could come up with a leapfrog innovation that catapults them (for a while). Young nimble companies overtake older and slower companies all the time — that’s how the Big Five started. Microsoft disrupted IBM. Google and Apple disrupted Microsoft. And so on.

But companies and tech investors need to be wise about the risks of betting on upstarts that are going up against these giants.

If you hope to make money through online advertising, you’ll be challenging Google and Facebook. If you’re doing anything in e-commerce, logistics or delivery, you’ll run into Amazon. In cloud computing, get ready to see Amazon, Microsoft and Google. If you’re building hardware, Apple likely stands in the way.

It might be better to focus on the niches that the Big Five don’t yet dominate. Their health-care efforts are still in early stages, and none is playing heavily in financial tech, drones or robotics. Microsoft’s power in enterprise software is blunted to some degree by other old giants like IBM, Oracle and SAP, plus newer players like Salesforce.

It’s always been hard to build a successful start-up. With the increasing dominance of the Big Five, it’s harder than ever.