Over the past week, when looking at the details of the Fed’s ongoing QE4, we showed out (here and here) that the New York Fed was now actively purchasing T-Bills that had been issued just days earlier by the US Treasury. As a reminder, the Fed is prohibited from directly purchasing Treasurys at auction, as that is considered “monetization” and directly funding the US deficit, not to mention is tantamount to “Helicopter Money” and is frowned upon by Congress and established economists. However, insert a brief, 3-days interval between issuance and purchase… and suddenly nobody minds. As we summarized:

“for those saying the US may soon unleash helicopter money, and/or MMT, we have some ‘news’: helicopter money is already here, and the Fed is now actively monetizing debt the Treasury sold just days earlier using Dealers as a conduit… a “conduit” which is generously rewarded by the Fed’s market desk with its marked up purchase price. In other words, the Fed is already conducting Helicopter Money (and MMT) in all but name. As shown above, the Fed monetized T-Bills that were issued just three days earlier – and just because it is circumventing the one hurdle that prevents it from directly purchasing securities sold outright by the Treasury, the Fed is providing the Dealers that made this legal debt circle-jerk possible with millions in profits, even as the outcome is identical if merely offset by a few days”

So, predictably, fast forward to today when the Fed conducted its latest T-Bill POMO in which, as has been the case since early October, the NY Fed’s market desk purchased the maximum allowed in Bills, some $7.5 billion, out of $25.3 billion in submissions. What was more notable were the actual CUSIPs that were accepted by the Fed for purchase. And here, once again, we find just one particular issue that stuck out: TY5 (due Dec 31, 2020) which was the most active CUSIP, with $4.136BN purchased by the Fed, and TU3 (due Dec 3, 2020) of which $905MM was accepted.

Why is the highlighted CUSIP notable? Because as we just showed on Friday, the Fed – together with the Primary Dealers – appears to have developed a knack for monetizing, pardon, purchasing in the open market, bonds that were just issued. And sure enough, TY5 was sold just one week ago, on Monday, Dec 30, with the issue settling on Jan 2, just days before today’s POMO, and Dealers taking down $17.8 billion of the total issue… 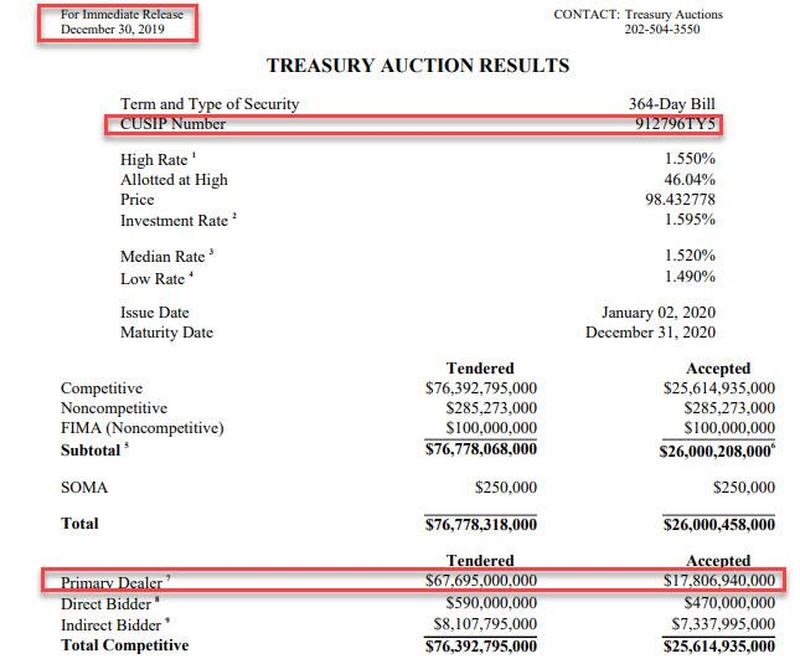 … and just a few days later turning around and flipping the Bill back to the Fed in exchange for an unknown markup. Incidentally, today the Fed also purchased $615MM of CUSIP UB3 (which we profiled last Friday), which was also sold on Dec 30, and which the Fed purchased $5.245BN of last Friday, bringing the total purchases of this just issued T-Bill to nearly $6 billion in just three business days.

In keeping with this trend, the rest of the Bills most actively purchased by the Fed, i.e., TP4, TN9, TJ8, all represent the most recently auctioned off 52-week bills…

… confirming once again that the Fed is now in the business of purchasing any and all Bills that have been sold most recently by the Treasury, which is – for all intents and purposes – debt monetization.

As we have consistently shown over the past week, these are not isolated incidents as a clear pattern has emerged – the Fed is now monetizing debt that was issued just days or weeks earlier, and it was allowed to do this just because the debt was held – however briefly – by Dealers, who are effectively inert entities mandated to bid for debt for which there is no buyside demand, it is not considered direct monetization of Treasurys. Of course, in reality monetization is precisely what it is, although since the definition of the Fed directly funding the US deficit is negated by one small temporal footnote, it’s enough for Powell to swear before Congress that he is not monetizing the debt.

Oh, and incidentally the fact that Dealers immediately flip their purchases back to the Fed is also another reason why NOT QE is precisely QE4, because the whole point of either exercise is not to reduce duration as the Fed claims, but to inject liquidity into the system, and whether the Fed does that by flipping coupons or Bills, the result is one and the same.