The Mosul Dam in Iraq could collapse at any time, causing massive flooding across the country.

Iraq produces over four million barrels of oil per day, a number which will drop immediately when this event occurs.

The Oil Situation: Since 2014, the oil market has been in a tailspin due to a multitude of global factors. As of March 2016, prices seem to have stabilized, although the persistence of crude oversupply continues to hang over the market. For months, declining US production and a potential output freeze by OPEC have been putting a potential floor in place. However, I believe an event is on the horizon which will change the equilibrium of oil prices immediately… the collapse of the Mosul Dam.

The Mosul Dam: The Mosul Dam is the largest dam in Iraq. It is located on the Tigris River in the western governance of Ninawa, upstream of the city of Mosul. Constructed in 1981, the dam has had a history of structural issues, requiring perpetual maintenance in order to maintain its integrity. Since 1984, this consisted of 300 man crews, working 24 hours a day across three shifts, filling holes in the bedrock through a process called grouting. For 30 years, this process worked, although it was always considered to be a ticking time bomb, dubbed “the most dangerous dam in the world” by the US Army Corps of Engineers.

In August 2014, the Islamic State of Iraq and the Levant took control of the dam, halting the maintenance process until it was retaken by Iraqi, Kurdish and US Forces two weeks later. Unfortunately, the damage was already done… since then, the maintenance crews have been limited to 30 personnel or less, and the equipment is inadequate to continue patching holes. Per the dam’s former chief engineer, Nasrat Adamo, “The machines for grouting have been looted. There is no cement supply. They can do nothing. It is going from bad to worse, and it is urgent. All we can do is hold our hearts.” As winter snows melt, the water levels will rise to unsustainable levels, and while it has two pressure release gates to avoid this scenario, one has been non-functioning for years, and using the second one alone risks the stability of the structure.

The Iraqis have been working on a solution with an Italian firm, the Trevi Group, known for fixing 150 dams worldwide. This case is special, however, as it will require a cut off wall 800 feet below the dam, the construction of which may affect the dam’s integrity. Additionally, the continued presence of ISIS poses a risk to any contractors in the area, which will require a security force of 450 personnel. Until Mosul (still held by ISIS) is retaken by Coalition forces, full repairs cannot commence. While the Iraqi forces believe this can happen in months, the US Defense Intelligence Agency head, Lt Gen. Vincent Stewart, is not optimistic that it will occur this year.

My personal opinion, knowing the effectiveness of Iraqi Forces (who dropped their guns and fled during the initial ISIL invasion), is that the Mosul Dam will fail. Without significant US assistance, the retaking of Mosul will not occur fast enough to begin construction, and as long as it is in ISIS’ hands, safe repairs cannot commence. Although the US has not said the event is guaranteed, warnings are coming at an increasing pace, and the State Department has warned US citizens to prepare for evacuation in the event of failure.

The Event: When the Mosul Dam collapses (and without reconstruction measures being implemented quickly, this is considered a ‘when’, not an ‘if’), a wave 45-65 feet high is expected to flood the country, drowning Mosul in four hours and reaching Baghdad within two to four days. 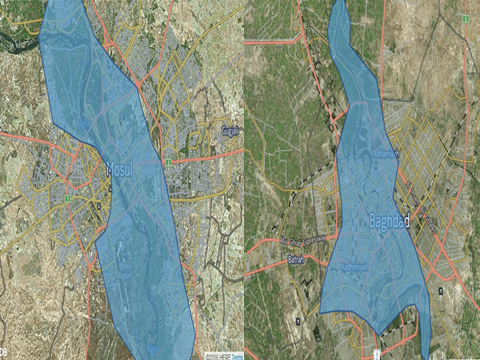 Estimates range from 500,000 to 1,500,000 lives lost. In addition to flooding, there will be secondary and tertiary effects… as demonstrated in America during Hurricane Katrina, panic and lawlessness can be equally as dangerous as the flooding itself, but even worse, diseases such as malaria and West Nile fever will follow. A catastrophic event of this magnitude will immediately push the entire country into chaos, and Iraq does not have the capability to respond without global support. The closest comparison to make is Haiti, which with billions in global assistance has not returned to normalcy in five years. Overall, I anticipate this catastrophe will take years to overcome… in the meantime, it will have a significant effect on the world’s supply of oil today.

The Effects: As of winter 2015, Iraq was producing 4.3M barrels per day, with the southern fields producing 3.3M barrels and the remaining 1M coming from the north. The graphic below (left) is from 2014, but gives a picture of the oil field placements. To the right is a topographical map, which gives us an idea of how the floodwaters will progress. Based on the elevation of where the flood would initiate, everything between Mosul and Baghdad will be completely covered, and while the wave will dissipate over time, the fields between Baghdad and Basra will see enough water (and everything that comes with it, to include bodies, disease and unexploded ordinance) to temporarily disable operations. Additionally, the pipeline between Kirkuk and Ramadi will be underwater, and there is a potential for damage to the Iraq Strategic Pipeline, which runs parallel to the direction of the water’s progression. 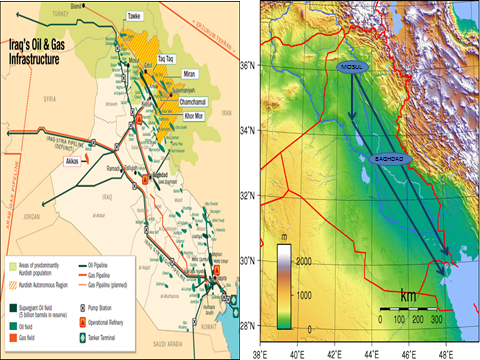 The world’s oversupply of oil is estimated around one million barrels per day. Assume that the above happens, and in a best-case scenario, only northern production is affected. What would occur immediately is the elimination of one quarter of Iraq’s oil output, rapidly pushing supply and demand into equilibrium. In a worst-case scenario, where all of Iraq’s oil is temporarily eliminated, it will move the supply deficit to three million barrels per day, leading to large ramifications on the world’s crude oil surplus within weeks.

While the true answer lies somewhere between these possibilities, what is undeniable is that a catastrophe of this magnitude will immediately move the price of crude oil up, and depending on the timeline to return to today’s production levels, that move could be enormous. In late 2015, the world produced 97M barrels per day, causing the price to collapse to $26.00 per barrel. In 2014, while producing 93M barrels per day, the price averaged near $110.00 prior to its fall. Although the above is simple extrapolation, demand continues to grow, so I think we can all agree that the price shift north will be significant.

Conclusion: The subject of this article is admittedly morbid. The true fallout of this event is the loss of hundreds of thousands of Iraqi lives, and damage that would take years to erase. However, as informed investors, it would be irresponsible to not consider global events, and this has the potential to re-balance the oil market in a matter of days. When this occurs, over four million barrels per day can disappear from production, immediately shifting the direction of oil prices. Based on the above information, I believe a production cut decision by OPEC is irrelevant, as natural forces are preparing to address the oil oversupply on their own.