Landlords in Venice and other tourist-friendly areas are converting units into short-term rentals, worsening the area’s housing shortage, a study says.

The last time he advertised one of his apartments, longtime Los Feliz landlord Andre LaFlamme got a request he’d never seen before.

A man wanted to rent LaFlamme’s 245-square-foot bachelor unit with hardwood floors for $875 a month, then list it himself on Airbnb.

“Thanks but no thanks,” LaFlamme told the prospective tenant. “You’ve got to be kidding me.”

But he understood why: More money might be made renting to tourists a few days at a time than to a local for 12 months or more. 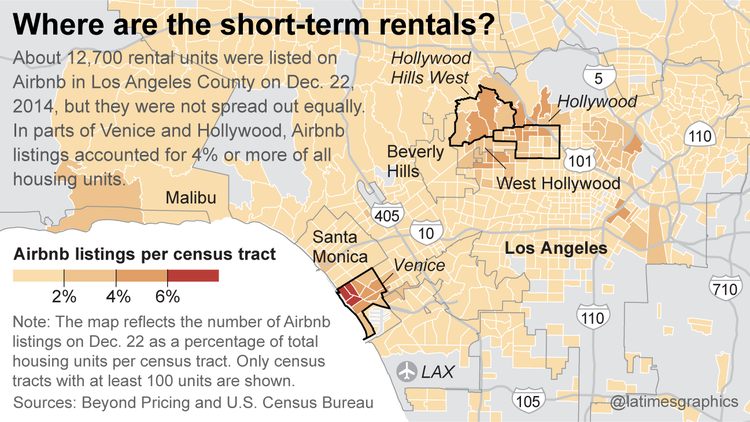 About 12,700 rental units were listed on Airbnb in Los Angeles County on Dec. 22, 2014, but they were not spread out equally. In parts of Venice and Hollywood, Airbnb listings accounted for 4% or more of all housing units.

As short-term rental websites such as Airbnb explode in popularity in Southern California, a growing number of homeowners and landlords are caving to the economics. A study released Wednesday from Los Angeles Alliance for a New Economy, a labor-backed advocacy group, estimates that more than 7,000 houses and apartments have been taken off the rental market in metro Los Angeles for use as short-term rentals. In parts of tourist-friendly neighborhoods such as Venice and Hollywood, Airbnb listings account for 4% or more of all housing units, according to a Times analysis of data from Airbnb’s website.

That’s worsening a housing shortage that already makes Los Angeles one of the least affordable places to rent in the country.

“In places where vacancy is already limited and rents are already squeezing people out, this is exacerbating the problem,” said Roy Samaan, a policy analyst who wrote the alliance’s report. “There aren’t 1,000 units to give in Venice or Hollywood.”

Fast-growing Airbnb and others like it say they help cash-strapped Angelenos earn a little extra money. Airbnb estimates that 82% of its 4,500 L.A. hosts are “primary residents” of the homes they list, and that nearly half use the proceeds to help pay their rent or mortgage. And the effect on the broader housing market is so small that it’s all but irrelevant, said Tom Davidoff, a housing economist at the University of British Columbia whom Airbnb hired to study its impact.

“Over the lifetime of a lease, rents maybe go up 1.5%,” he said. “That’s peanuts relative to the increases we’ve seen in housing costs in a lot of places.”

But there are growing signs of professionalization of the short-term rental world, from property-manager middlemen like the one who e-mailed LaFlamme to Airbnb “hosts” who list dozens of properties on the site. The Los Angeles Alliance study estimates that 35% of Airbnb revenue in Southern California comes from people who list more than one unit.

“I don’t think anyone would begrudge someone renting out a spare bedroom,” Samaan said. “But there’s a whole cottage industry that’s springing up around this.”

City Council member Mike Bonin, whose coastal district includes Venice, and Council President Herb Wesson want to study how these rentals have affected the city. No regulations have been drafted, and Bonin said the council would seek extensive community input. Current rules bar short-term rentals in many residential areas of the city, but critics say they’re rarely enforced.

As city officials craft new ones, they’ll certainly be hearing from Airbnb and its allies. Last year, the company spent more than $100,000 lobbying City Hall and released a study touting its economic impact in L.A. — more than $200 million in spending by guests, supporting an estimated 2,600 jobs. A group representing short-term rental hosts has made the rounds of City Council offices as well.

This industry “needs to be regulated and regulated the right way,” said Sebastian de Kleer, co-founder of the Los Angeles Short Term Rental Alliance and owner of a Venice-based vacation rental company. “For a lot of people, this is a very new issue.”

Neighborhood groups are sure to weigh in too, especially in Venice.

The beach neighborhood has the highest concentration of Airbnb listings in all of metro Los Angeles. Data collected by Beyond Pricing, a San Francisco-based start-up that helps short-term rental hosts optimize pricing, show that in census tracts along Venice Beach and Abbott-Kinney Boulevard, Airbnb listings accounted for 6% to 7% of all housing units — about 10 times the countywide average.

A letter last fall from the Venice Neighborhood Council to city officials estimated that the number of short-term rental listings in the area had tripled in a year, citing a “Gold Rush mentality” among investors looking for a piece of the action. That’s hurting local renters, said Steve Clare, executive director of Venice Community Housing.

“Short-term rentals are really taking over a significant portion of the rental housing market in our community,” Clare said. “It’s going to further escalate rents, and take affordable housing out of Venice.”

Along the Venice boardwalk, a number of apartment buildings now advertise short-term rentals, and houses on the city’s famed “walk streets” routinely show up in searches on Airbnb. Even several blocks inland, at Lincoln Place Apartments — a 696-unit, newly renovated complex that includes a pool, gym and other tourist-friendly amenities — Roman Barrett recently counted more than 40 listings on Airbnb and other sites. Barrett, who moved out over the issue, said Airbnb effectively drives up the rent. He paid $2,700 a month for a one-bedroom; now he’s looking farther east for something he can afford.

“It’s making places like Santa Monica and Venice totally priced out. Silver Lake is impossible. I’m looking in Koreatown right now,” Barrett said. “They need to make a law about this.”

A new law of some sort is the goal at City Hall. New York, San Francisco and Portland, Ore., have crafted regulations to govern taxes, zoning and length of stay in short-term rentals, and Airbnb says it’s glad to help in that process here.

“It’s time for all of us to work together on some sensible solutions that let people share the home in which they live and contribute to their community,” spokesman Christopher Nulty said in a statement Tuesday.

Will Youngblood, the man who e-mailed LaFlamme about managing his apartment in Los Feliz, says he’d also appreciate clearer rules and an easier way to pay occupancy taxes.

Youngblood runs five Airbnb apartments, mostly in Hollywood. A former celebrity assistant, he’s been doing this for two years; it’s a full-time job. Most of Youngblood’s clients own their homes but travel a lot or live elsewhere. One, he rents and lists full time. He’s been looking around for another.

If the city decides it doesn’t like what he’s doing, Youngblood said, he’ll go do something else. But for now, he said, it’s a good way to make some cash and meet interesting people.

But he won’t meet LaFlamme. The longtime landlord concedes he “might be old-fashioned,” but he just doesn’t like the idea of strangers traipsing through his apartments. He prefers good, long-term tenants, and in L.A.’s red-hot rental market he has no problem finding them.

“I almost find it painful to rent things these days,” he said. “There’s so much demand and so many people who are qualified and nice people who I have to turn away.”

For that apartment in Los Feliz, LaFlamme said, he found a tenant in less than 24 hours.