In the latest revision to the IMF’s economic outlook published this morning, the fund warns that the world is facing “a crisis like no other”, and now expects global growth to shrink -4.9% in 2020, 1.9% below the April 2020 forecast of -3.0%.

The COVID-19 pandemic has had a more negative impact on activity in the first half of 2020 than anticipated, the IMF said, adding that the recovery is projected to be more gradual than previously forecast. In 2021 global growth is projected at 5.4% down from 5.8%, a number which will also be revised lower, with China’s expected 1.0% growth (down from 1.2%) the big wildcard.

As shown in the table below, the IMF has made the following GDP revisions for 2020: 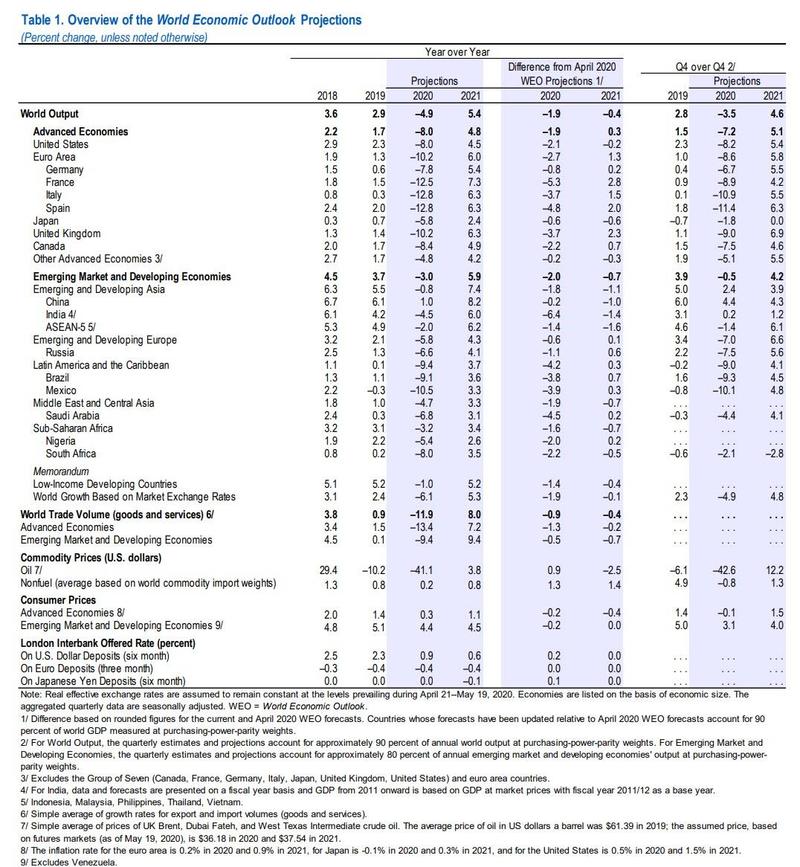 India suffered the biggest downward GDP revision from the April forecasts, with a 4.5% contraction now expected, compared with a prior projection of a 1.9% expansion. Latin America has been hit by the virus due in part due to less developed health systems; its two biggest economies Brazil and Mexico are now forecast to contract 9.1% and 10.5%, respectively.

“With the relentless spread of the pandemic, prospects of long-lasting negative consequences for livelihoods, job security and inequality have grown more daunting,” the global emergency lender said in its update to the World Economic Outlook.
The IMF conceded that as with the April 2020 WEO projections, there is a higher-than-usual degree of uncertainty around this forecast, with the baseline projection resting on key assumptions about the fallout from the pandemic.

In economies with declining infection rates, the slower recovery path in the updated forecast reflects:

The fund lowered its expectations for consumption in most economies based on a larger-than-expected disruption to domestic activity, demand shocks from social distancing and an increase in precautionary savings. 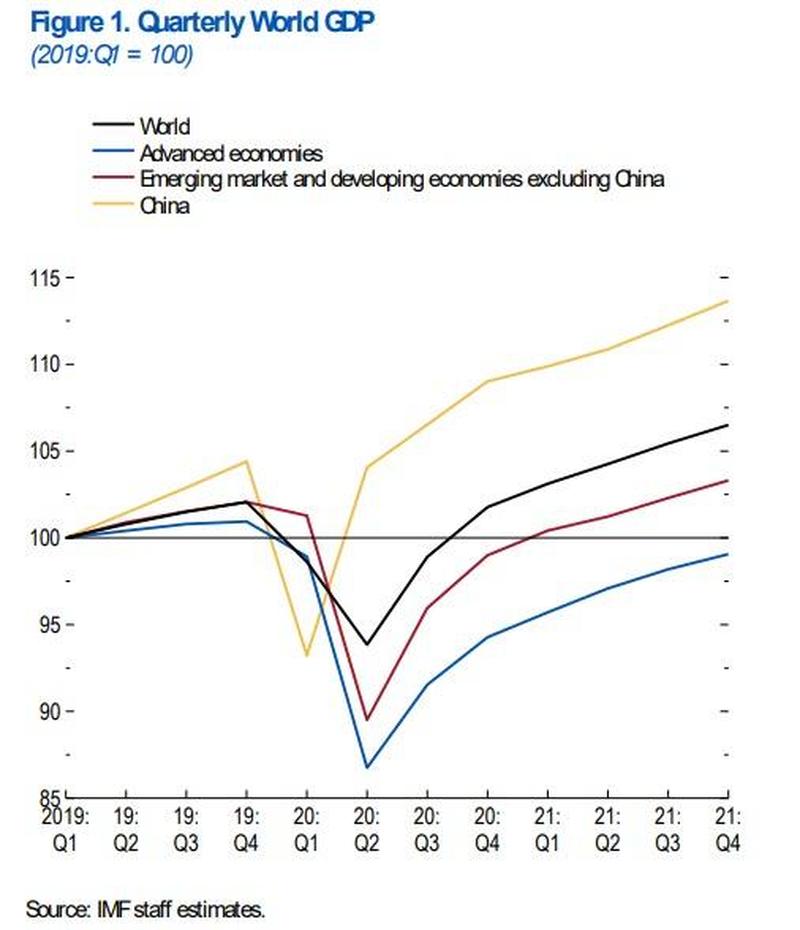 For economies struggling to control infection rates, a lengthier lockdown will inflict an additional toll on activity. Moreover, the forecast assumes that financial conditions—which have eased following the release of theApril 2020 WEO—will remain broadly at current levels. Alternative outcomes to those in the baseline are clearly possible, and not just because of how the pandemic is evolving. The extent of the recent rebound in financial market sentiment appears disconnected from shifts in underlying economic prospects—as the June 2020 Global Financial Stability Report (GFSR) Update discusses—raising the possibility that financial conditions may tighten more than assumed in the baseline.

Overall, this would leave 2021 GDP some 6.5% percentage points lower than in the pre-COVID-19 projections of January 2020. The adverse impact on low-income households is particularly acute, imperiling the significant progress made in reducing extreme poverty in the world since the 1990s.

More importantly, the IMF also warned that the rebound in “financial market sentiment appears disconnected from shifts in underlying economic prospects raising the possibility that financial conditions may tighten more than assumed in the baseline.”

Back to the surprisingly gloomy forecast, the IMF said that downside risks remain significant, as “outbreaks could recur in places that appear to have gone past peak infection, requiring the reimposition of at least some containment measures. A more prolonged decline in activity could lead to further scarring, including from wider firm closures, as surviving firms hesitate to hire jobseekers after extended unemployment spells, and as unemployed workers leave the labor force entirely.”

Furthermore, financial conditions may again tighten as in January–March, exposing vulnerabilities among borrowers. “This could tip some economies into debt crises and slow activity further.” Moreover, the sizable policy response following the initial sudden stop in activity may end up being prematurely withdrawn or improperly targeted due to design and implementation challenges, leading to misallocation and the dissolution of productive economic relationships.

The IMF warned of a collapse in global trade volume in goods and services, which is expected to tumble 11.9% in 2020.

Finally, the IMF warned that the pandemic’s impact may significantly increase inequality, with more than 90% of emerging-market and developing economies forecast to show declines in per capita income.

Oddly enough, it had nothing to say about the biggest source of global inequality for the past decade: central banks that have injected over $30 trillion in liquidity in the past ten years, and whose actions assure that the next crash may well be the last.

Looking ahead, The IMF presents two alternative scenarios: In one, there’s a second virus outbreak in early 2021, with disruptions to domestic economic activity about half the size of those assumed for this year. The scenario assumes emerging markets experience greater damage than advanced economies, given more limited space to support incomes. In that case, output would be 4.9% below the baseline for 2021 and would remain below the baseline in 2022. In the second scenario, with a faster-than-expected recovery, global output would be about a half percentage point better than the baseline this year and 3% above the baseline in 2021.