(ZeroHedge) Last quarter, amid the bank panic resulting from surging loan loss provisions, we observed that the heart of the debt-addicted US economy was hit especially hard by the double whammy of collapsing consumer loan supply, with the August Senior Loan Officer Survey finding that banks reporting tighter loan conditions had surged to the highest level since the Lehman bankruptcy, while consumer demand for most loan types had tumbled, in some cases to record low levels.

However, in the subsequent three months much has changed, following the latest round of bank earnings which saw a collapse in loan loss provisions across the US banking sector, which miraculously plunged from near all time highs back to pre-covid levels in the span of just a few weeks.

This dramatic turnaround in bank outlooks on future loan losses also had a profound impact on loan issuance standards.

According to the latest Federal Reserve Senior Loan Officer Opinion Survey (SLOOS) for bank lending activity over the third quarter of this year which was released last week, lending standards generally eased across most loan categories, thawing what until Q2 was an effectively frozen loan market.

There was also an improvement in pricing with 13% of banks increasing spreads of loan rates over the cost of funds for large firms vs. 59% last quarter, but a smaller share of banks on net reported tightening terms in Q3 on maximum size of credit lines (7% vs 41% in Q2) and for premiums on riskier loans (29% vs 59% in Q2).

Among the banks that tightened credit standards or terms for C&I loans or credit lines, 26% cited a deterioration in the bank’s capital position as playing a role, 95% cited worsening industry-specific problems, 91% cited a less favorable or more uncertain economic outlook, 69% cited a reduced tolerance for risk, 18% cited decreased liquidity in the secondary market for loans, 11% cited a deterioration in the bank’s own liquidity position, and 9% cited increased concerns about the effects of legislative changes, supervisory actions, or changes in accounting standards.

Completing the supply side, banks’ willingness to make consumer installment loans was basically unchanged after sharp decreases in the previous two quarters; credit standards for approving credit card applications tightened further (27% on net vs. 72% previously), while a modest share of banks also tightened standards for auto loans (14% vs. 55% previously). 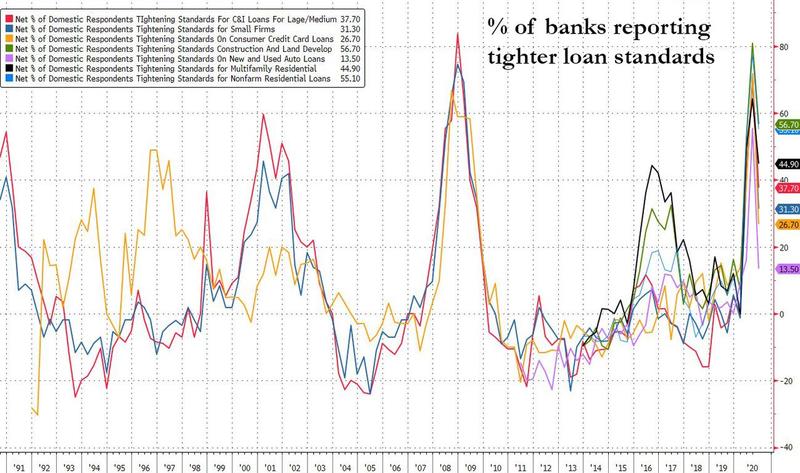 However, while supply clearly is thawing, it was the demand side that was troubling, especially in the key – for the US economy – Commercial & Industrial (C&I) loan category, where demand from large-and medium-sized firms, weakened further in Q3 as 35% of banks on net reported weaker demand for C&I loans for large and medium-market firms, compared to 23% on net reporting stronger demand in the previous survey. This was the lowest net demand in this series since the financial crisis. 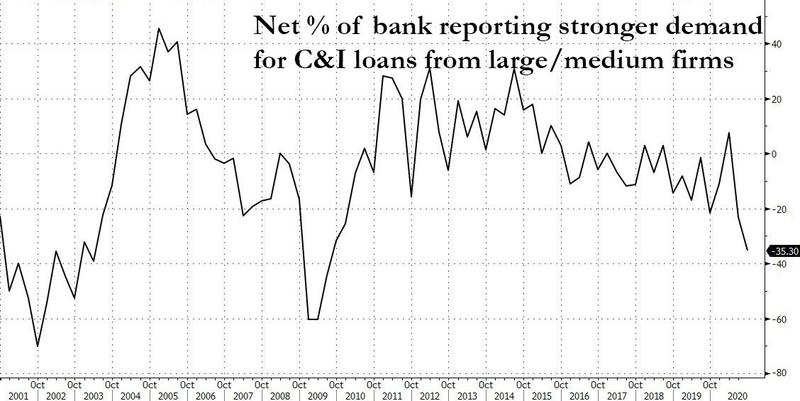 That said, there were some signs of recovery in other loan classes: demand for CRE loans fell on net across all three categories, but by less than in Q2. And while demand for mortgage loans increased further in Q3, it was credit card loan demand that saw a major reversal, with demand for credit card loans virtually unchanged at 2% on net vs. a collapse of -65% in Q2, while demand for auto loans picked up at a small share of banks (8%) after steep declines the previous two quarters. 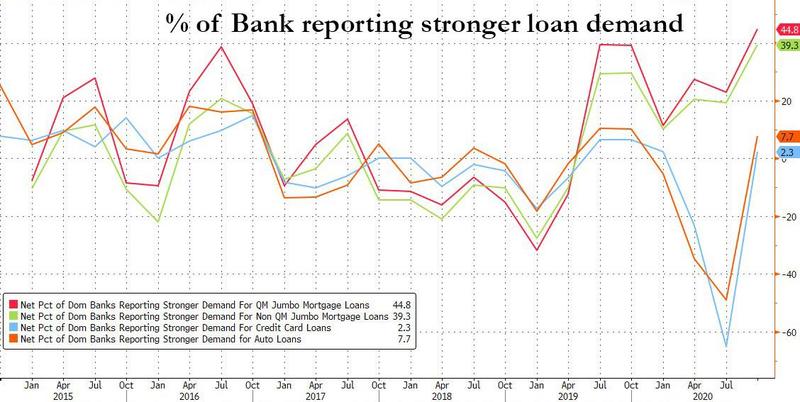 In summary, while Americans aggressively took out loans which serve merely to satisfy their own personal consumption needs and prefund that next car or TV purchase, and which merely pull demand from the future,  when it comes to the all important C&I loans which result in capex spending and overall economic growth, here the picture continues to deteriorate despite an easing in loan issuance standards. This simply means that for the vast majority of Americans, the economic environment remains so dismal that demand for C&I loans is now at levels last seen just around the Lehman crisis. And since the consumption-funding loans which are going gangbusters will soon re-freeze following the next round of covid closures, we doubt it will take too long before this translates into a sharp swoon in the broader economy.

Which, as we explained in another post earlier today, is precisely what the Fed needs in order to launch its next QE…

… one where the Fed will end up monetizing all of 2021’s bond issuance.

Is Another “Crisis” Imminent: The Fed Must Double QE In 2021 But It Needs A Catalyst