A brief excerpt:California doesn’t report monthly inventory numbers, but they do report the year-over-year change. Here is the press release from the California Association of Realtors® (C.A.R.): California home sales and price curb in June as housing demand cools, C.A.R. reports

Closed escrow sales of existing, single-family detached homes in California totaled a seasonally adjusted annualized rate of 344,970 in June, according to information collected by C.A.R. from more than 90 local REALTOR® associations and MLSs statewide. The statewide annualized sales figure represents what would be the total number of homes sold during 2022 if sales maintained the June pace throughout the year. It is adjusted to account for seasonal factors that typically influence home sales. June’s sales pace was down 8.4 percent on a monthly basis from 376,560 in May and down 20.9 percent from a year ago, when 436,020 homes were sold on an annualized basis.

California’s median home price declined 4.0 percent in June to $863,790 from the revised record-high of $900,170 recorded in May. The June price was 5.4 percent higher than the $819,630 recorded last June. The moderation in the median home price was due partly to a change in the mix of sales in June, as the high-end market started pulling back.

With both closed sales and pending sales slowing by more than 20 percent, total active listings surged 64.4 percent in June, the largest year-over-year growth in more than seven years. Active listings in June also climbed to the highest level since November 2019, with a month-to-month increase of 28.8 percent from May. 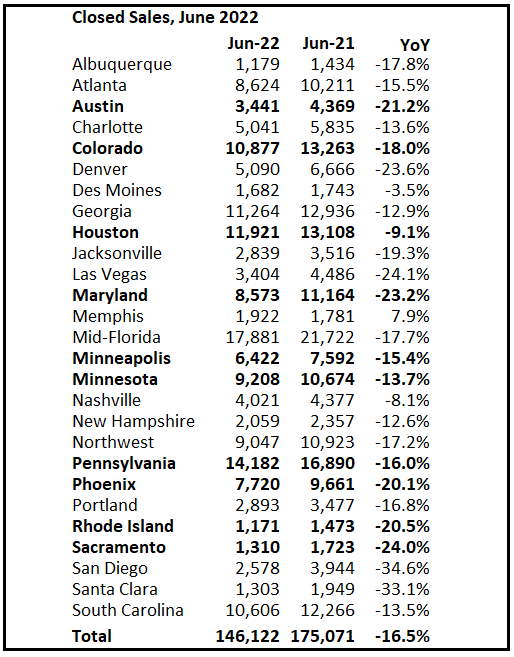 … Housing economist Tom Lawler expects the NAR to report sales at a seasonally adjusted annual rate of 5.12 million in June. The consensus is for 5.40 million.

Contracts for sales in June were mostly signed in April and May, when mortgage rates were lower than in June, so we will probably see further declines in sales in July and August

There is much more in the article. You can subscribe at https://calculatedrisk.substack.com/