(Bruce Wilds) Unnoticed by most taxpayers and touted as good news was the fact we the taxpayers of America have stepped up to the plate and bailed out hundreds of failing pensions. Much of this took place without the average citizen even knowing it occurred.

Buried deep in the American Rescue Plan signed into law by President Biden in March 2021 was a provision mandating the government to bail out ailing multi-employer pension plans.

The American Rescue Plan Act of 2021 was the $1.9 trillion economic stimulus package proposed by President Joe Biden to speed up the United States’ recovery from COVID-19. The huge bill was passed with little time for debate or even to be read, all under the idea congress needed to take  action to address the economic and health effects of the pandemic and the ongoing recession. While how this provision to assist troubled pensions has been addressed did not get a great deal of air time it may prove to be far more costly than predicted.

People are often led to believe pensions are a promise carved in stone, however, when the money is not there pensions and promises will be broken so pensioners should prepare for the pain. This is especially true in the public sector which has a history of granting pensions that are unheard of in the private sector. The 25 largest U.S. public pensions face trillions in unfunded liabilities. If Americans took the time to stand back and look at the bigger picture they will see the Pension Benefit Guaranty Corporation (PBGC) an independent agency of the United States government responsible for acting as the nation’s “safety net” for failed pensions is also in trouble. When a pension fails this agency is expected to take control of its assets and dole them out to its pensioners in the coming years. The ugly truth is the PBGC is not a rock but is in need of its own bailout.

Joshua Gotbaum, former head of the PBGC from 2010 to 2014, voiced his unhappiness with Washington leaders failing to confront this reality when he said “No one wants to admit that pension benefits have to be cut, and therefore, in public, no one wants to be seen as supporting anything that cuts benefits. However, unless some benefits are cut, all are cut.” It is likely the future will prove him right. We are only beginning to see the tip of the iceberg when it comes to this growing problem and just how many of these schemes are underfunded. This is not just a problem only in America but it exists all over the world. 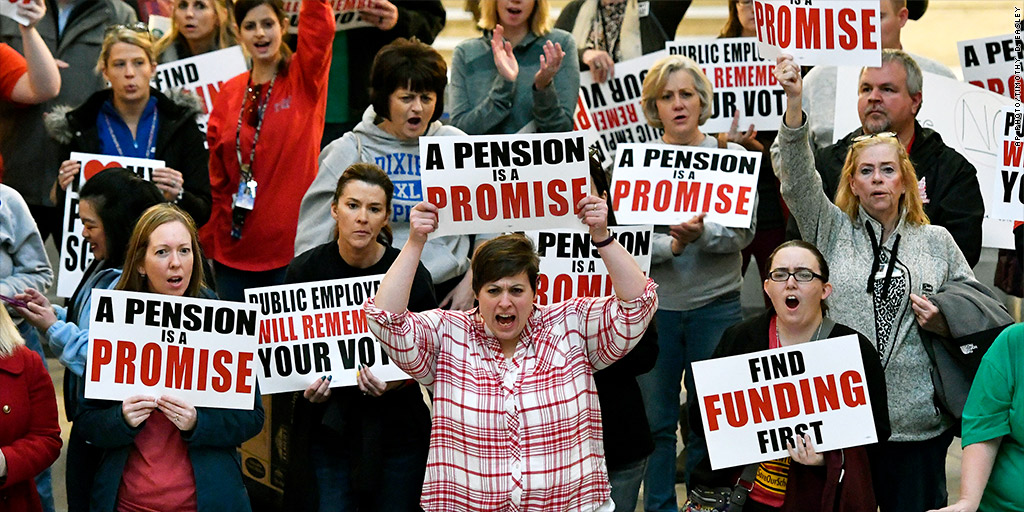 Pensions are giant pools of capital responsible for paying out retirement benefits to workers. And right now many pension funds around the world simply don’t have enough assets to cover the retirement obligations they owe to millions of workers. Governments have lulled their populations into a false sense of security based on financial promises they are not going to be able to keep and most likely will exacerbate generational conflict going forward. This is not simply a political problem, it’s an arithmetic problem, for which no real answer exists.

Recently while speaking in Cleveland, Biden used the occasion to announce the agreement to implement a financial assistance program for multi-employer pension plans. In a speech where he was joined by union workers and retirees, President Joe Biden said. “We turned a promise broken into a promise kept.” Adding to the cost of this bailout, Biden bragged, “Those retirees who lost their benefits will have them restored retroactively.”

Under the American Rescue Plan, certain underfunded multi-employer plans were allowed to apply for taxpayer-funded assistance to help them stabilize their finances and restore benefits that were previously cut. It should not surprise any financially conservative person to find the interim rules for the program issued by the Pension Benefit Guaranty Corp. drew criticism from pension consultants, plan trustees, and other experts for not being generous enough to ensure the long-term survival of these troubled pensions.

The current solution allows plans to invest a portion of their financial-assistance funds in higher-return assets. The White House claims this modification in the final rule helps create a situation that allows plans receiving assistance to remain solvent and pay full benefits through at least 2051. The rules allow plans to invest up to one-third of their financial-assistance funds in higher-return assets and stocks rather than in safer investment-grade bonds. To be clear, this is a “bailout” and it could be argued that it also allows them to mismanage the funds and get into trouble again.

Before the American Rescue Plan, over 200 of the nearly 1,400 multi-employer plans  were facing near-term insolvency. This threatened to leave 2 to 3 million participants without their full earned benefits. These multi-employer pension plans were created through agreements between unions and two or more employers and cover nearly 11 million participants, many of them in industries such as construction, trucking, and manufacturing.

As noted many times on this blog site, pensions are in many ways the biggest Ponzi Scheme of modern man. Many of the plans have over promised while being hit hard by a decline in unionization, employer withdrawals from the plans, and investment losses. While a 2014 law allowed some troubled plans to slash the benefits of current retirees the idea conflicts with protections enshrined in federal pension law.

The new 33% limit on stocks and other higher-return investments is intended to allow plans to grow their financial-assistance funds increasing their ability to pay benefits through 2051. This so-called “financial assistance program” also extends to 2055 the solvency of the PBGC’s multi-employer insurance program, which was previously expected to run out of money in 2026. Of course, it is logical the troubled PBGC would do anything it can to put lipstick on the unfolding pension diabolical and halt the flow of failed pensions into its system.

We should not focus on the fact the PBGC has already approved over $6.7 billion in financial assistance for plans covering over 127,000 workers and retirees. We should instead look at the real long-term cost and ramifications of this bailout. The agency, which insures defined-benefit pension plans, expects it will ultimately distribute $74 billion to $91 billion worth of financial assistance to these plans but numbers flowing out of Washington are often wrong. I expect the real cost of pension bailouts to be far greater than anyone can imagine.

I join those few Congressional Republicans who pointed out this is a deeply flawed bailout of a select group of privately managed retirement plans that creates perverse incentives for further mismanagement and under funding of pensions. Not only does it pave the way for more taxpayer bailouts of pensions, but it also continues the dangerous transfer of wealth which leaves the taxpayer holding the bag.