(Bryan Horwath) The median sale price of existing homes in the Las Vegas area grew to record high $337,250 in September, according to a monthly report from Las Vegas Realtors.

The median price for September sets a new all-time for the region, though a shortage of inventory has led to an unbalanced market despite near all-time low mortgage rates.

The continued rise of home prices has come despite a global pandemic that has decimated the region’s tourism-based economy.

“Local home prices keep setting records, which is remarkable when you think about the challenges we’re facing,” said Tom Blanchard, president of Las Vegas Realtors and a longtime area agent. “The pause during the beginning of the pandemic seems to have pushed the traditional summer sales season into the fall.”

For town homes and condominiums, the median sale price for a unit in September was $195,500, which represented a 14% increase from September 2019.

With Gov. Steve Sisolak’s order that allowed open houses to resume earlier this month, Blanchard said he envisions the potential for market activity in the coming weeks and months.

“We’ll see if we can sustain this momentum heading into next year,” Blanchard said. “We’re also dealing with a housing shortage, with no signs of that changing anytime soon.”

The number of homes available for sale remains “well below” the six-month supply that’s generally considered to represent a balanced market. At the end of last month, just under 4,800 homes — not including condos or town homes — were listed for sale without an offer, down 35% from September 2019.

New data published by the Greater Las Vegas Association of Realtors shows 10,000 single-family homes were on the market and by the end of November, 7,000 of those homes had zero offers, up 54% compared to 2017 and the highest number of homes in Las Vegas Valley to not get a bid in more than two years.

Realtors are warning Las Vegas residents that they should not panic. 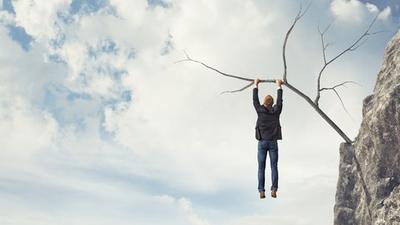 However, it is becoming increasingly clear that the real estate market is at a turning point, in one of the most overvalued markets in the country.

“Are we as fast as we were six months ago? No, but we couldn’t sustain that, it was not sustainable, it was never going to be sustainable. So we’re back to pretty much a normal market.”

Lynam has recognized the shift in the market and suggested a slowdown in the quarters ahead: He predicts homes will now average four to six months on the market into 2019. Before, Lynam said homes were on the market between 2.5 to 3 weeks.

While thousands of homes are going no bid in November, some homes are still selling, but not as often as they used to, a sign that the housing market is headed for trouble. Buyers acquired about 2,300 houses in November, down 12% from November 2017, the Greater Las Vegas Association of Realtors (GLVAR) reported.

The pullback in demand could be linked to fast-rising home prices, higher borrowing costs, and an affordability crisis.

In the last several months, sellers have responded with more price cuts.

Las Vegas was “the poster child of the housing crash in 2008,” said Vivek Sah, director of the LIED Institute for Real Estate Studies at the University of Nevada, Las Vegas.

“There are some buyers who are not pulling the trigger because of that.”

The deceleration in less expensive housing markets like Las Vegas, suggests that the slowdown is now broad base and the entire US economy is headed for trouble in 2019.

“Live with your friends in these Shipping Container Apartments!” the Craigslist, Inc. post reads

As President Trump’s trade war seizes up global supply chains, one side-effect is an overabundance of shipping containers. And, with just one simple click on eBay, there are pages and pages of 40-foot shipping containers for sale ranging from $1,500 to $3,500.

Some pre-fab container homes are more luxurious than others, ranging from $30,000 to $449,000 for a massive luxury duplex.  While most Americans are too blind to understand their living standards are in decline, on a post-great financial crisis basis, the search trend among Americans for “shipping container homes for sale” has rapidly grown in the past decade.

The American dream has transformed from a McMansion of the 1990s and 2000s to a tiny modern container home built with relics from the industrial past of a once vibrant economy.

About 16 days ago, someone posted an ad on Craigslist, offering “units” for rent in a brand new container apartment building in Washington, D.C. where each unit costs about $1,099 per month, and in light of DC’s unaffordable rents, this seems like a good deal for heavily indebted millennials.

“This uniquely constructed 4 unit building is truly one of a kind. Welcome to DC’s first shipping container residential building. Constructed using repurposed steel shipping containers, this brand new modern apartment is one of the most memorable multi-family buildings in all of DC. You can rent a bedroom for yourself or bring a group of friends!” the ad stated.

As shown above, residents share a “large restaurant style kitchen,” and have a large communal area, sort of like a dormitory (below).

Could shipping container “apartments” be the solution for cities battling a housing affordability crisis? If the experiment proves successful in Washington, expect the metal crate buildings to show up in a port city neighborhood near you housing several dozen broke, if entitled, young Americans, and owned by – who else – Blackstone.

… meanwhile, realtors are getting nervous about sustainability of the Las Vegas area housing market for good reason. 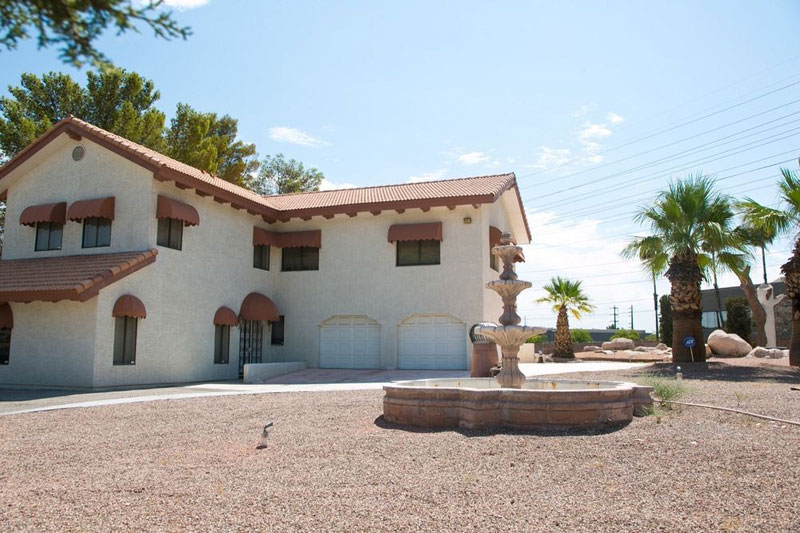 26 feet underneath this modest, 2 story suburban home in Las Vegas you will find a sprawling, 5,000 square foot home—complete with four-hole putting green, swimming pool, jacuzzi and sauna—and designed to withstand a nuclear blast.

The bunker home at 3970 Spencer Street was built in the 1970s by businessman Girard ‘Jerry’ B. Henderson, who fearing attack from the Soviets, built his first underground bunker in the 1960s in Boulder, Colorado during the height of the Cold War. 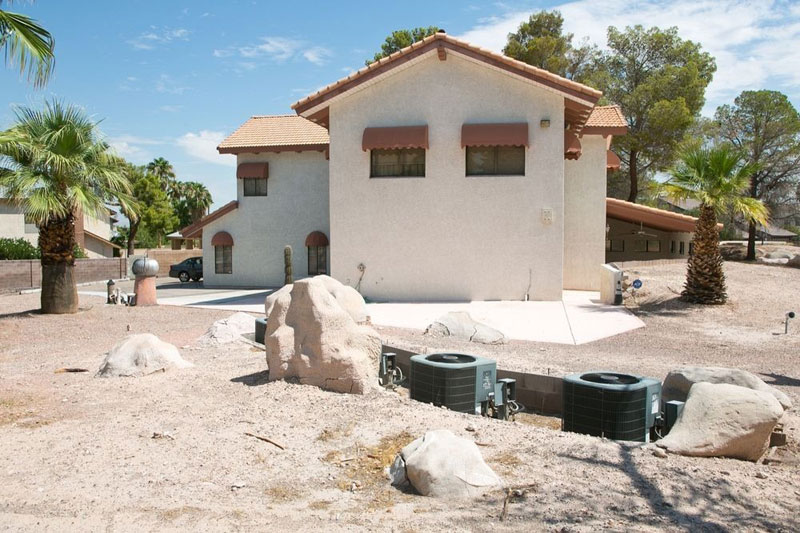 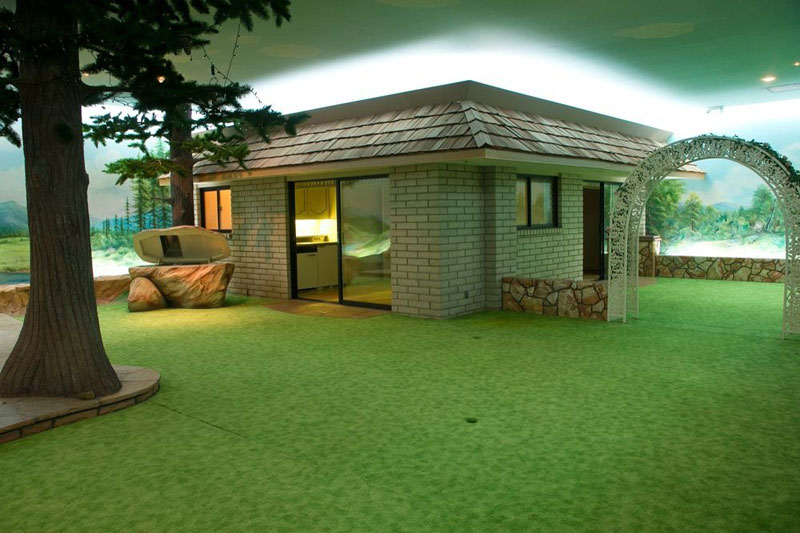 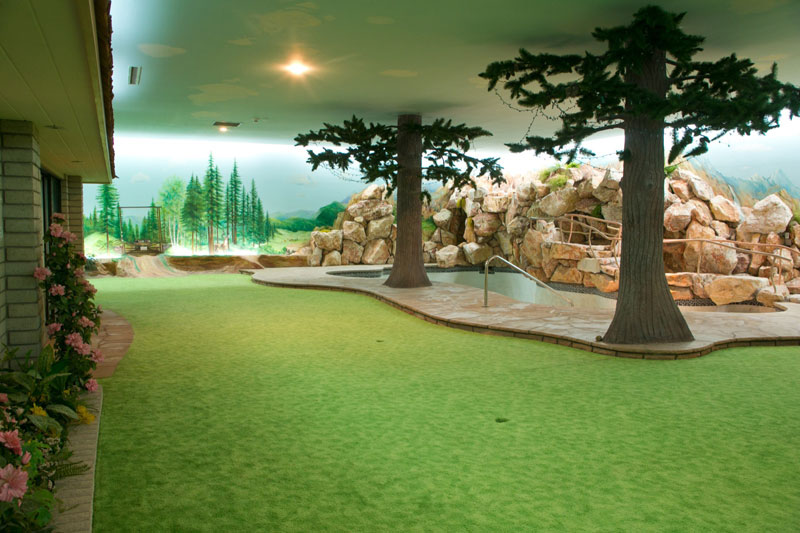 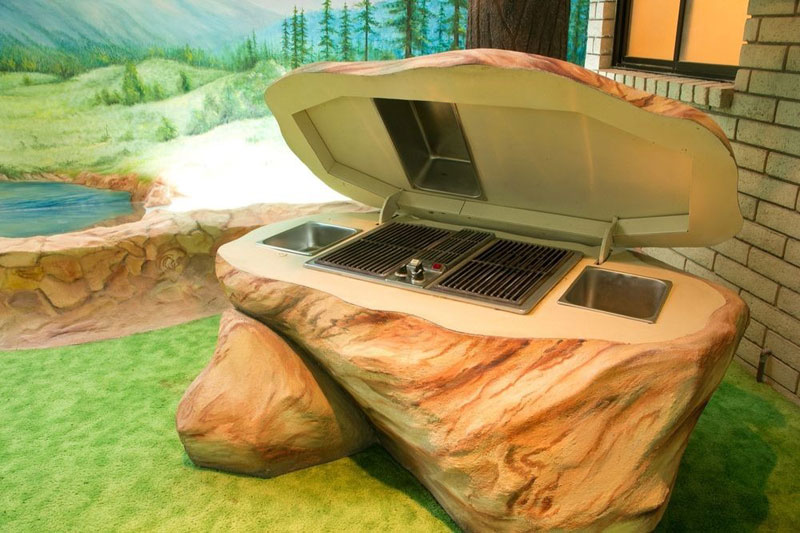 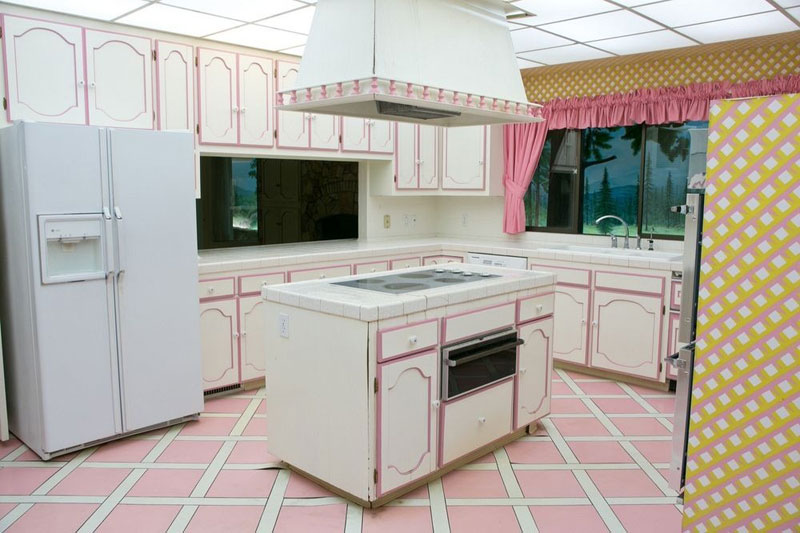 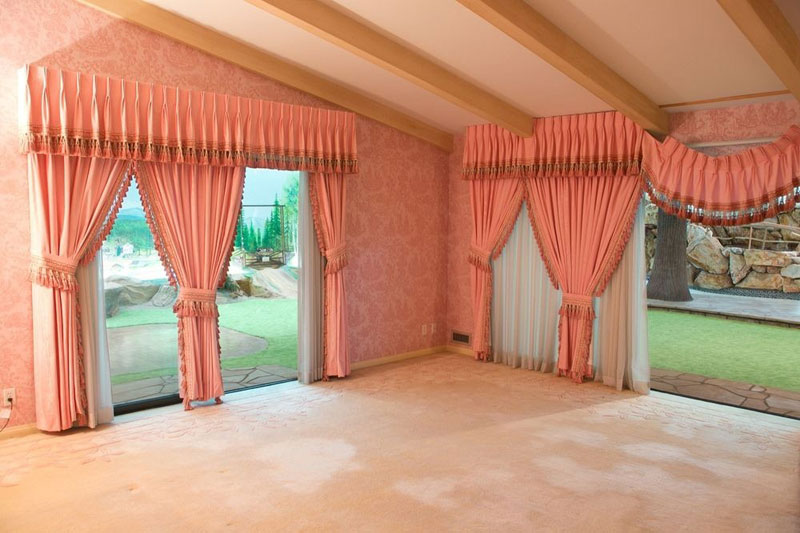 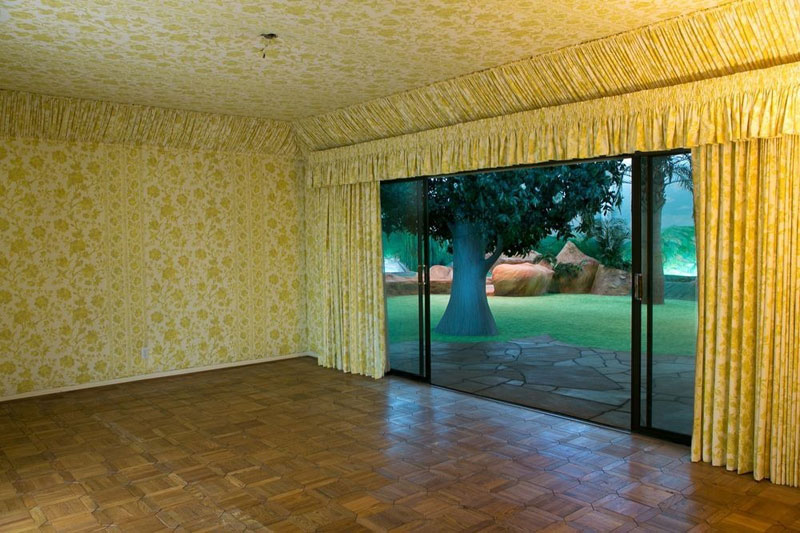 According to VegasInc.com, the house had been purchased for $2 million in 2005 and was foreclosed by Seaway Bank and Trust Co. in 2012.

The bank listed the property for $1.7 million in 2013, eventually selling the property in March 2014 to a mysterious group called the Society for the Preservation of Near Extinct Species for $1.15 million. [source] 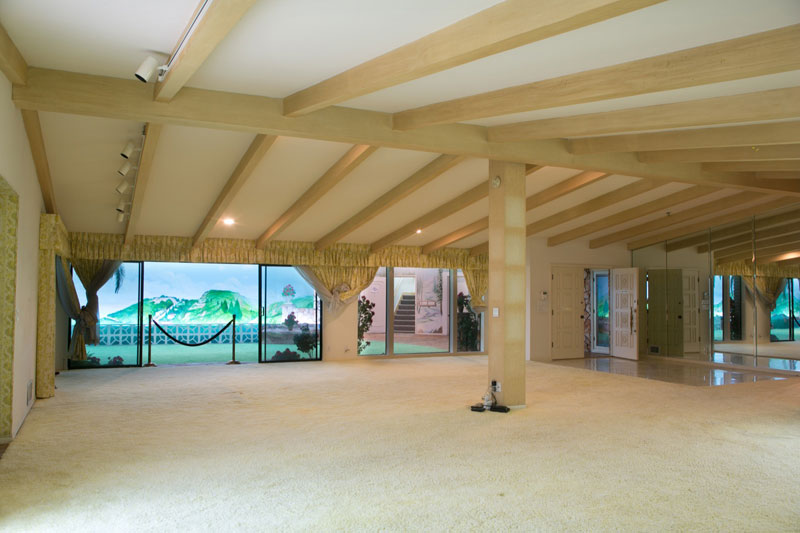 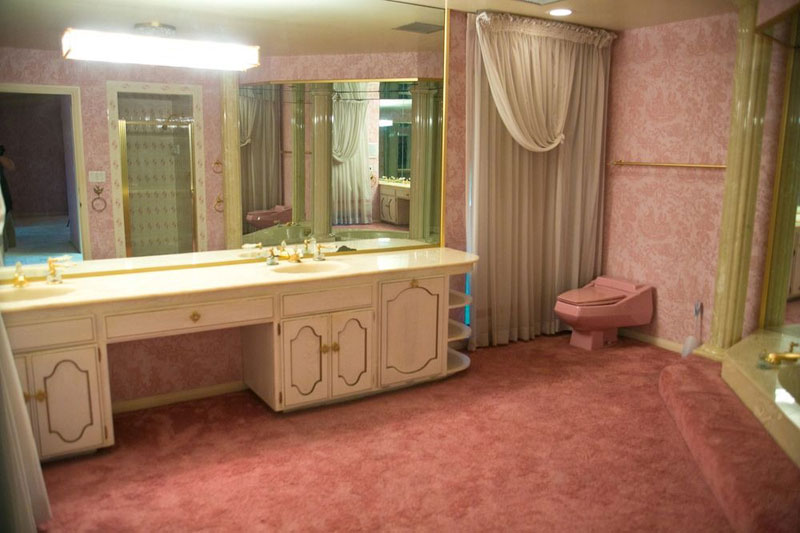 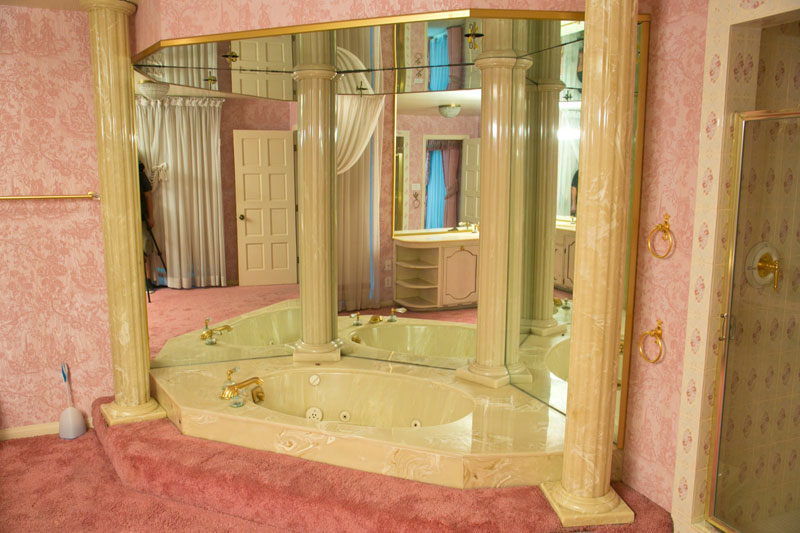 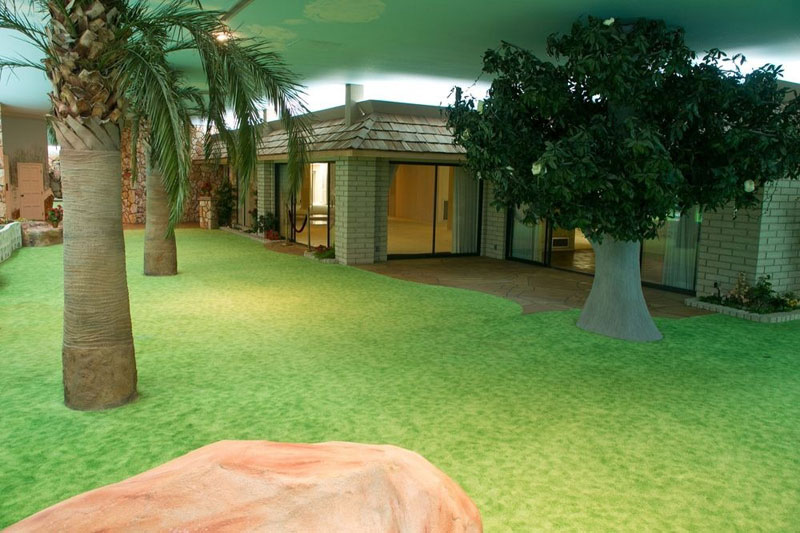 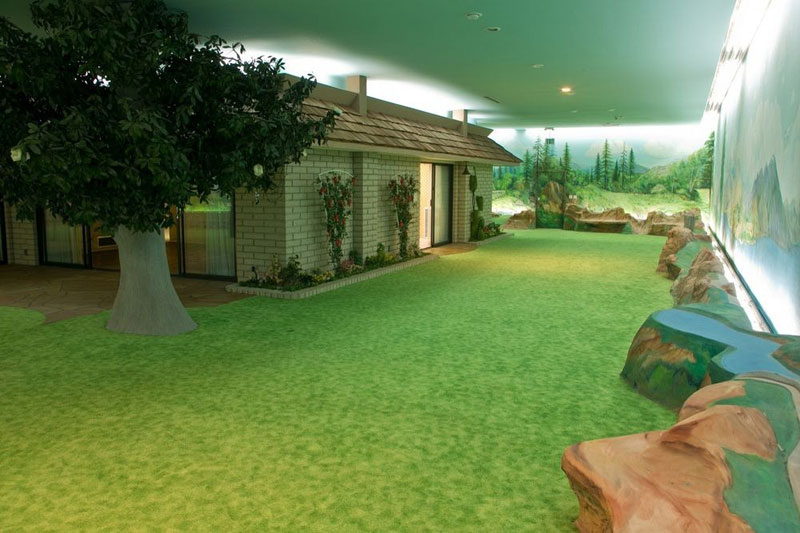 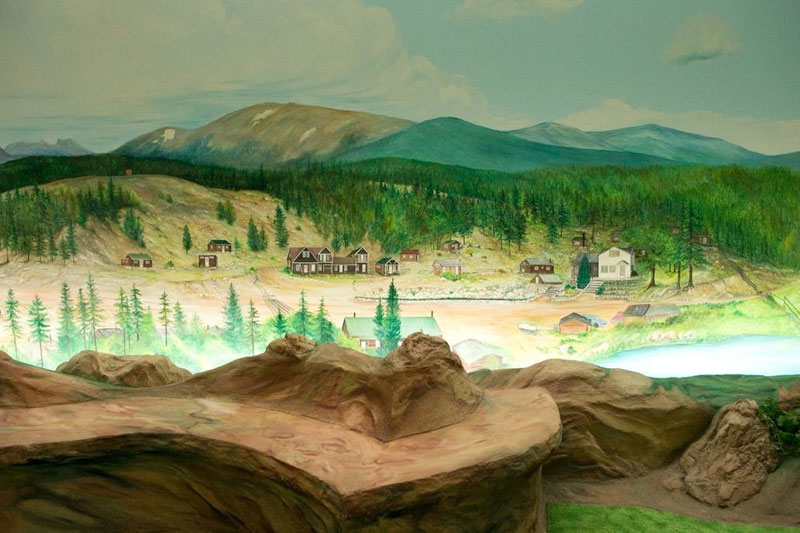 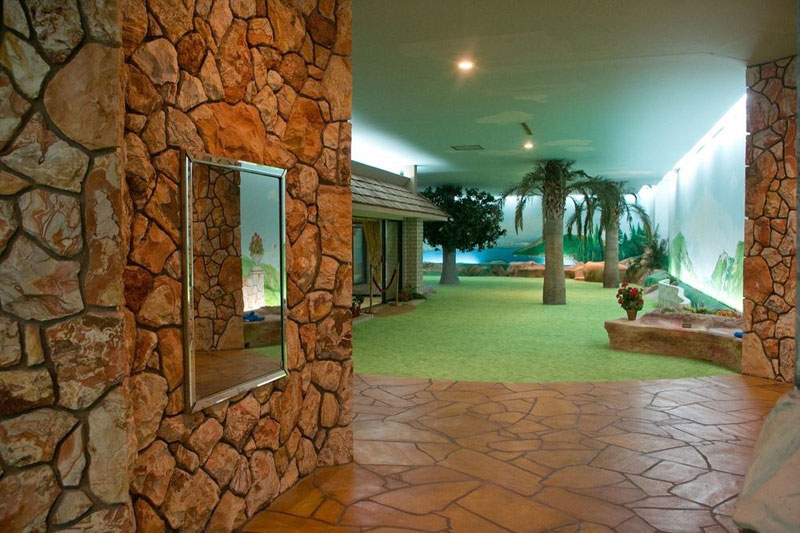 The two-bedroom, three-bathroom underground home might be the most peculiar in Las Vegas. Built beneath a typical, suburban two-story house, the bunker home spans more than 5,000 square feet and is part of a 15,200-square-foot basement that also features a casita.

The subterranean refuge seems designed to stave off boredom and claustrophobia. It has a four-hole putting green, a swimming pool, two jacuzzis, a sauna, a dance floor with a small stage, a bar, a barbecue and huge murals of rural, tranquil settings.

Light switches labeled “Sunset,” “Day,” “Dusk” and “Night” mimic lighting conditions at those times by dimming or brightening lights and stars on the ceiling, which is painted sky blue with white clouds.

A few miles east of the Strip, the home was built in the 1970s by entrepreneur Girard B. “Jerry” Henderson, who feared a nuclear Armageddon during the Cold War. While others built fallout shelters, he wanted to live underground full time, according to news reports.

Henderson co-founded Underground World Home Corp., a subterranean home building company. A brochure for the company boasts that underground living is healthier, cleaner, quieter, cheaper, safer and is “the ultimate in true privacy!”

“How would you like sunshine every day … when you want it?” the brochure asks. 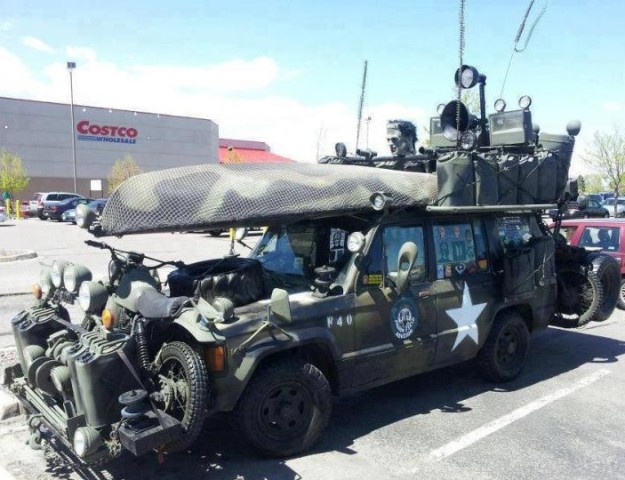 CBRE’s John Knott and Michael Parks announced this week the firm’s listing of the Fontainebleau Las Vegas, a partially completed hotel casino project that represents an original investment in land and improvements of more than $2 billion. At 730 feet, it stands as the tallest hotel tower on the Las Vegas Strip.

Situated on 22.65 acres on the east side of Las Vegas Boulevard south of Sahara Avenue, the project’s structure provides for flexibility relative to its completion and can be reconfigured to meet a new investor’s vision, according to Knott.

“A Las Vegas Boulevard address, coupled with adjacency to the planned expansion of the Convention Center District by the Las Vegas Convention and Visitors Authority (LVCVA), along with the tower’s iconic height, combine to make this one of the most exciting development opportunities in Las Vegas in many years,” said Knott. “The structure has been well-maintained and is ready for immediate development to bring to fruition the vision of its next owner. This is an unparalleled asset with significant potential on one of the most landmark streets in the world. Opportunities like this are few and far between.”

“As the global and local economy rebounds and 2014 visitation to Las Vegas topped a record-setting 41 million tourists, the time is ideal to realize the potential of this incredibly valuable piece of Las Vegas real estate,” said Parks. “Hotel occupancy rates in Las Vegas are over 90 percent with record average daily rates, retail sales are strong and there is an improvement in mass market gaming numbers. The next generation of this development is limited only by the imagination and vision of its new owner.”

The property is located adjacent to the former Riviera Hotel & Casino site that is now owned by the LVCVA and is part of a planned 10-year, $2.5 billion expansion and redevelopment initiative that will add significant convention and meeting space, a World Trade Center and improve the area via aesthetic enhancements and technology upgrades.  The goal of the initiative is to ensure Las Vegas remains the world’s number one tradeshow destination for decades to come.

“The Fontainebleau gives a well-heeled investor or group the opportunity to do something meaningful and wonderful that will add to the Las Vegas experience,” said Parks.