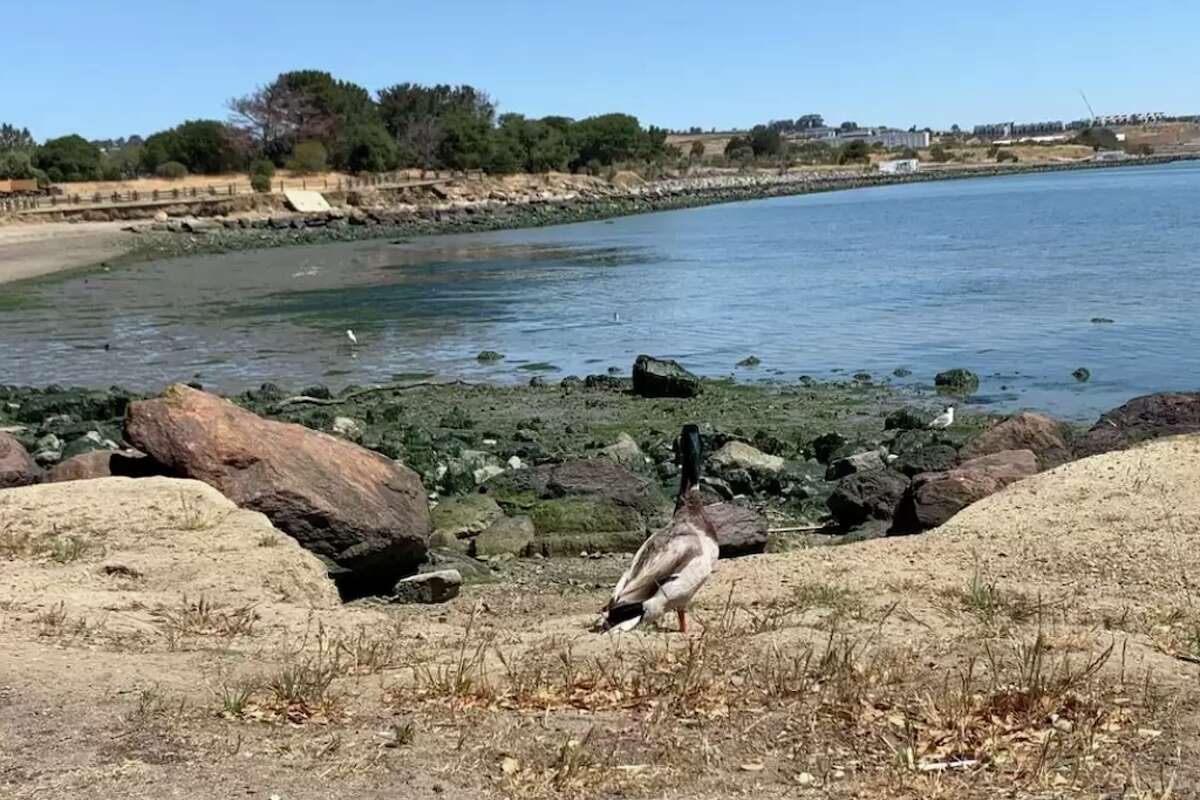 END_OF_DOCUMENT_TOKEN_TO_BE_REPLACED

With more people telecommuting than ever due to the COVID-19 pandemic, it appears that the allure of cramped, expensive urban housing, poo-covered sidewalks and homeless people shooting up in Starbucks has worn off. 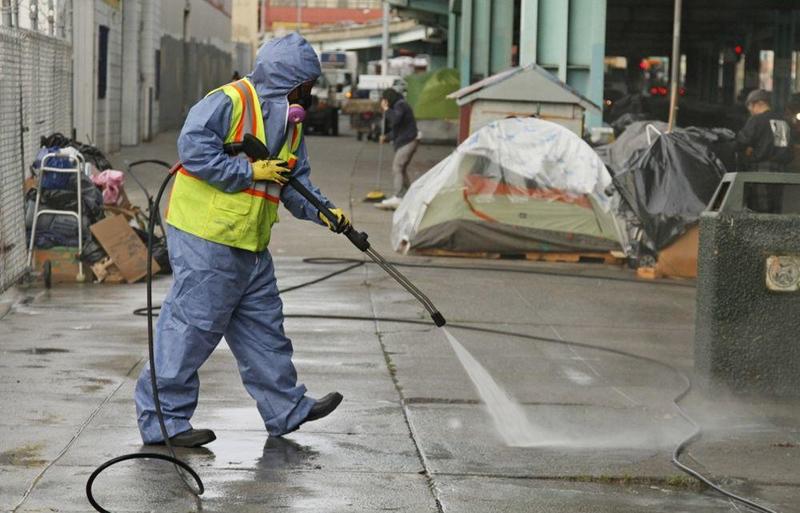 According to online real estate company Zillow, there is a mass exodus of people looking to get out of San Francisco real estate – as the housing market is on fire in the Bay Area suburbs, all the way to Lake Tahoe.

According to the company’s “2020 Urban-Suburban Market Report,” home prices in the city have fallen 4.9% year-over-year, while inventory has jumped 96% during the same period, as a flood of new listings hit the market. Zillow notes that they aren’t seeing the same trend in cities such as Miami, Los Angeles, Washington D.C. or Seattle.

When comparing the principal city to its surrounding suburbs, the San Francisco metro area does break the mold. Higher levels of inventory, up 96% YoY following a flood of new listings during the pandemic, are sitting on the market in the city proper, a significantly larger jump than the surrounding suburbs. Whereas in similar cities like Los Angeles, Miami, Boston, Seattle, and Washington, D.C., declining or flat inventory is a consistent trend within and outside the city limits. Relatively higher inventory has different causes by city, and is not clearly attributable to either supply or demand. In San Francisco, though, the softening is clear as sellers inundate the market and buyers have not changed their pace to match — newly pending sales in the city are up only 1.7% YoY.

Meanwhile, both urban and suburban markets nationally are seeing homes sell more quickly than they were in February, while “most areas have seen price cuts decelerate relative to February, and slightly more so in the suburbs,” according to the report.

That said, Zillow is seeing about the same percentage of people searching for urban vs. suburban listings YoY, which would suggest that at least as of June, the ongoing BLM protests which have turned urban cities into Escape From [insert your big blue Democrat run city here].

(Wolf Richter) There is a lot of discussion about the low levels of inventory for sale, as potential sellers have pulled their homes off the market or are not wanting to list their homes at the moment, waiting for the Pandemic to blow over, or waiting for more certainty or whatever; or their mortgage is now in forbearance and they don’t want to make a move.

These discussions cite buyers who, after being kept out of the housing market for a couple of months due to the lock downs, are now swarming around out there, stumbling all over each other, looking for homes to buy, jostling for position, and engaging in bidding wars with each other.

And then there is the widely reported move to the suburbs, or to small towns, and away from big densely populated cities, by those who have shifted to work-from-home, to work-from-anywhere, which blatantly contradicts some of the other stories of big cities being overrun by buyers engaging in bidding wars.

Those are some of the narratives we’re hearing, and they all make some intuitive sense. But this is not the case everywhere. So we’re going to look at San Francisco, one of the most expensive housing markets in the US, based on weekly data that was compiled by real-estate brokerage Redfin, from local multiple listing service (MLS) and Redfin’s own data, updated at the end of last week.

San Francisco is now flooded with homes for sale. “Active listings” surged to 1,344 homes in the week ended July 5, up 65% from the same week last year, and the highest number since the housing bust, amid a 145% year-over-year surge in “new listings.”

There normally is a seasonal surge in active listings after Labor Day that peaks in late October. But this month, the surge of active listings (1,344) has already blown by those peaks in October, including the multi-year peak of 1,296 in October 2019. This is “pent-up supply” coming on the market at the wrong time of the year when supply normally declines (chart via Redfin): 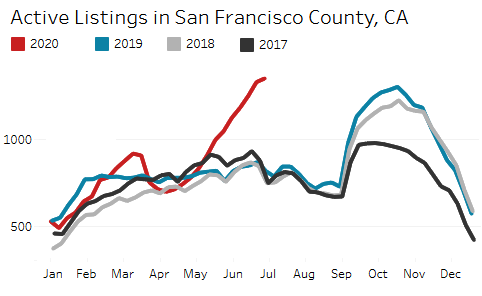 Redfin’s data doesn’t go back that far. But the 1,344 active listings would be the highest since 2011, during the final stretch of the San Francisco Housing Bust, based on MLS data provided by local real-estate site, SocketSite.

Supply of homes for sales has more than doubled, from 7.8 weeks last year at this time to 16.6 weeks now, at the current rate of sales. Note the spike of supply in May, a function of sales that had collapsed (chart via Redfin). 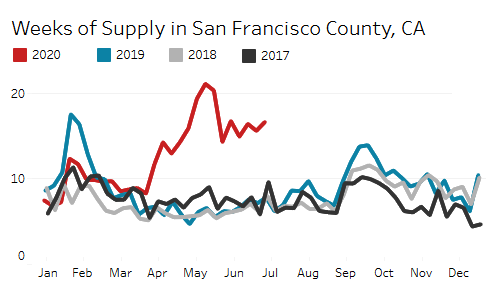 Homes are being pulled off the market again: 61 homes were delisted, over double the number in the same week last year. The chart below shows the spike in delisted homes that started in mid-March during the early phases of the lock down. It also shows the normal seasonal spike of delistings ahead of the holidays in December – yes, inventory is low because sellers pull their unsold property off the market. But now, with the flood of inventory for sale on the market, the surge in delisted homes has started again (chart via Redfin): 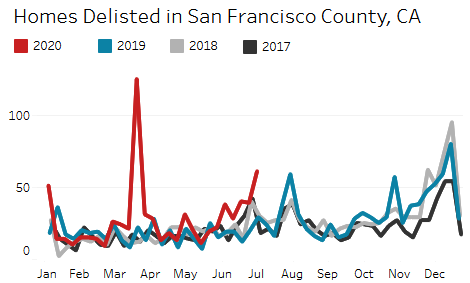 Pending sales lack pent-up demand. Pending sales had collapsed 77% by early April compared to the same time last year, but then started digging out of that trough. In early July, pending sales were still down 8% from last year and now are following the seasonal downtrend and appear to be back on track, just slightly lower. 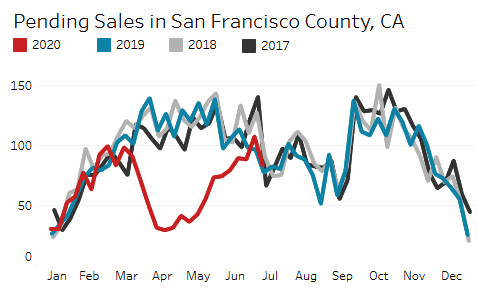 Buyers now have the largest choice of homes for sale since the Housing Bust nearly a decade ago. And there is no need to engage in bidding wars or other foolishness.

Sellers might be motivated, as they say. Among the sellers might be those who – given the issues of the Pandemic, or future Pandemics – are itching to leave the second most densely populated city in the US, and one of the most expensive, and head to cheaper pastures inland in California, or to other states, or to smaller towns with big price tags along the California coast.

There are lots of anecdotal reporting on these trends, including housing markets that have caught fire in places such as Carmel-by-the-Sea, a beach town on California’s Monterey Peninsula, on Highway 1, about 110 miles south of San Francisco and about 75 miles south of Silicon Valley.

And with work-from-home in place, it might be convenient too. It doesn’t take very long to drive to San Francisco and less long to Silicon Valley for the twice-a-month meeting, especially now, with work-from-home having cleared up some of the previously infernal congestion.

There are all kinds of anecdotal observations and theories people are spinning at the moment, trying to come to grips with the changes underway. But one thing we can now see: The sellers have come out of the woodwork in San Francisco. Just don’t look for the usual thicket of open-house signs on the sidewalk. The process has gone digital and by appointment only.