Anyone who expected that the easing of the quarter-end funding squeeze in the repo market would mean the Fed would gradually fade its interventions in the repo market, was disappointed on Friday afternoon when the NY Fed announced it would extend the duration of overnight repo operations (with a total size of $75BN) for at least another month, while also offering no less than eight 2-week term repo operations until November 4, 2019, which confirms that the funding unlocked via term repo is no longer merely a part of the quarter-end arsenal but an integral part of the Fed’s overall “temporary” open market operations… which are starting to look quite permanent.

This is the statement published today by the NY Fed:

In accordance with the most recent Federal Open Market Committee (FOMC) directive, the Open Market Trading Desk (the Desk) at the Federal Reserve Bank of New York will conduct a series of overnight and term repurchase agreement (repo) operations to help maintain the federal funds rate within the target range.

Effective the week of October 7, the Desk will offer term repos through the end of October as indicated in the schedule below. The Desk will continue to offer daily overnight repos for an aggregate amount of at least $75 billion each through Monday, November 4, 2019.

Securities eligible as collateral include Treasury, agency debt, and agency mortgage-backed securities. Awarded amounts may be less than the amount offered, depending on the total quantity of eligible propositions submitted. Additional details about the operations will be released each afternoon for the following day’s operation(s) on the Repurchase Agreement Operational Details web page. The operation schedule and parameters are subject to change if market conditions warrant or should the FOMC alter its guidance to the Desk. 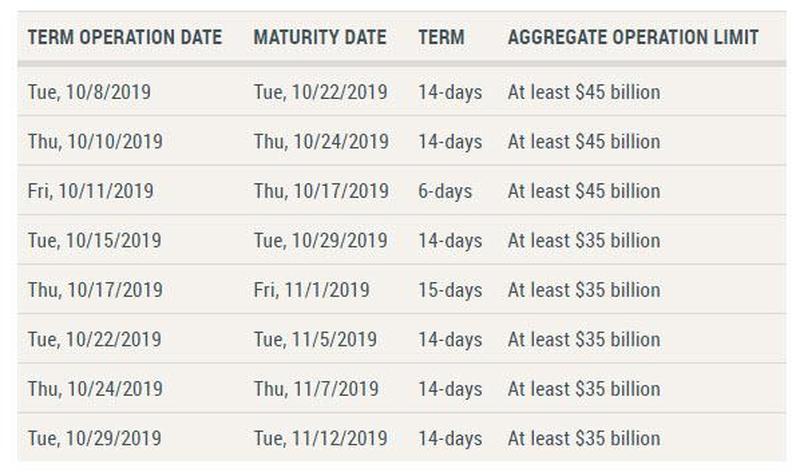 What this means is that until such time as the Fed launches Permanent Open Market Operations – either at the November or December FOMC meeting, which according to JPMorgan will be roughly $37BN per month, or approximately the same size as QE1…

… the NY Fed will continue to inject liquidity via the now standard TOMOs: overnight and term repos. At that point, watch as the Fed’s balance sheet, which rose by $185BN in the past month, continues rising indefinitely as QE4 is quietly launched to no fanfare.

And remember: whatever you do, don’t call it QE4!

Trader Gregory Mannarino breaks it down…