As we noted last month, the US housing market is reflecting the extremes of the economy right now – between those who can’t make ends meet due to the pandemic, and those who are either still employed, are sitting on a pile of equity, or both.

One one end of the spectrum you’ve got affluent borrowers locking in record-low rates, while mortgage originations reached a record $1.1 trillion in the second quarter as rates on 30-year mortgages dipped below 3% for the first time in history in July, according to Bloomberg.

Meanwhile, refis may just be getting started.

There are still nearly 18 million homeowners with good credit and at least 20% equity who stand to cut at least 0.75% off their current rate by refinancing, according to Ben Graboske, president of Black Knight data and analytics.

“We would expect near-record-low interest rates to continue to buoy the market,” he said in a statement Tuesday. –Bloomberg

What’s impressive is that the quarterly spike in new mortgage originations occurred while under nationwide public health measures that restricted home showings, appraisals, and in-person document signings, according to the report. That said, refis accounted for around 70% of home loans issued during the period.

Also notable is that the average loan-to-value ratio is above 90%, as borrowers are having no trouble securing loans with just 10% or less down. 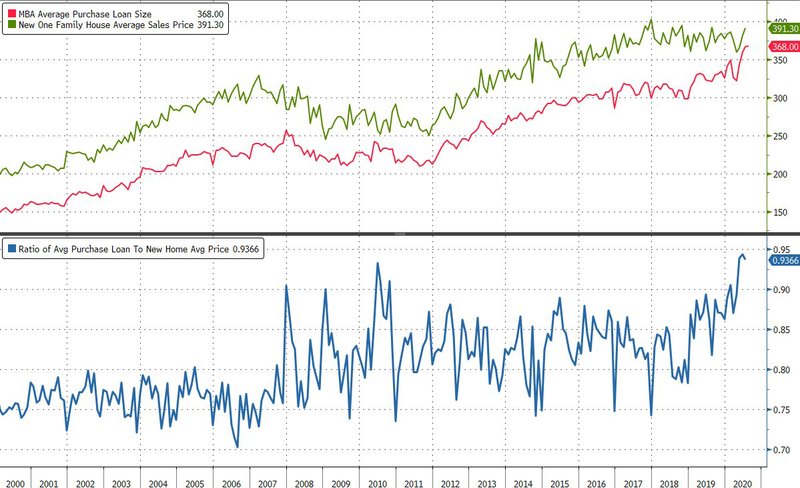 At the other end of the spectrum, mortgage delinquencies are up 450% from pre-pandemic levels, with around 2.25 million mortgages at least 90 days late in July – the most since the credit crisis, according to Black Knight, Inc.

“The money is in the homes and people with college education are still working, but the pain is being felt where people are unemployed,” said Wharton real estate professor, Susan Wachter, adding “COVID-1984 will drive an increase in the already high income-inequality gap, and wealth inequality, actually, which is much more extreme.”

While the unemployment rate fell to 8.4% in August, more than 11 million jobs were still lost in the pandemic, the Labor Department reported last week. Supplemental benefits for the unemployed of $600 a week expired in July and Congress has been at an impasse over a follow-up aid package. –Bloomberg