Over the past 6 months ZeroHedge has repeatedly discussed the plight of commercial real estate which unlike most other financial assets, failed to benefit from a Fed bailout or backstop (but that may soon change). It culminated in June when we wrote that the “Unprecedented Surge In New CMBS Delinquencies Heralds Commercial Real Estate Disaster.” The ongoing crisis in structured debt backed by commercial real estate in general and hotel properties in particular, prompted Wall Street to launch the “Big Short 3.0“ trade: betting against hotel-backed loans, which had the broadest representation in the CMBX 9 index, whose fulcrum BBB- series has continued to slide even as the broader market rebounded.

Yet while prominent failures within the CMBS universe had so far been rare due to over collateralization of even highly distressed portfolios, as the economic slump drags on, as various stimulus measures expire and as landlords fail to make rent payment, the various embedded liquidity buffers have been rapidly draining and as a result we are now approaching the moment where one or more prominent names are about to suffer a spectacular blow up.

The first among them will almost certainly be the Starwood Retail Property Trust 2014-STAR, a portfolio which is backed by an almost $700 million defaulted loan which is collateralized by several malls – including The Mall at Wellington Green in Florida – owned by Barry Sternlich’s Starwood Capital, and whose investors are starting to take losses according to Bloomberg, after the Covid-1984 pandemic shuttered stores, crippled rental payments and wiped out emergency cash reserves that had been keeping interest payments flowing.

A big reason for the devastation is that The Mall at Wellington Green, the core property of the portfolio and Wellington’s biggest taxpayer, saw its taxable value drop 32% in 2019 to $150 million as a result of the Nordstrom departure, according to the Palm Beach County Property Appraiser’s Office. Starwood Retail Partners bought the property in 2014 for $341.1 million, marking the largest real estate deal ever recorded in the county at the time. It is now worth less than half, and that’s before most of its other anchor clients also fled or filed for bankruptcy.

The CMBS portfolio also includes the MacArthur Center in Norfolk, Virginia, the Northlake Mall in Charlotte, North Carolina, and The Mall at Partridge Creek in Clinton Township, Michigan.

Meanwhile, total debt on the properties has declined fractionally from $725MM at launch to $682MM currently.

Which is why it won’t come as a surprise that the CMBS portfolio has cut interest payouts to investors for a second time, after a reserve account dried up in June and a sharply lower property valuation led to the servicer holding back some funds.

As Bloomberg notes, the bond’s performance shows how rapidly the pandemic is deepening losses in a sector that was already getting crushed by online shopping. Even the part of the bond deal that was once rated AAA – i.e., where rating agencies saw virtually no risk of taking losses just two months ago – have now been cut deep into junk territory. 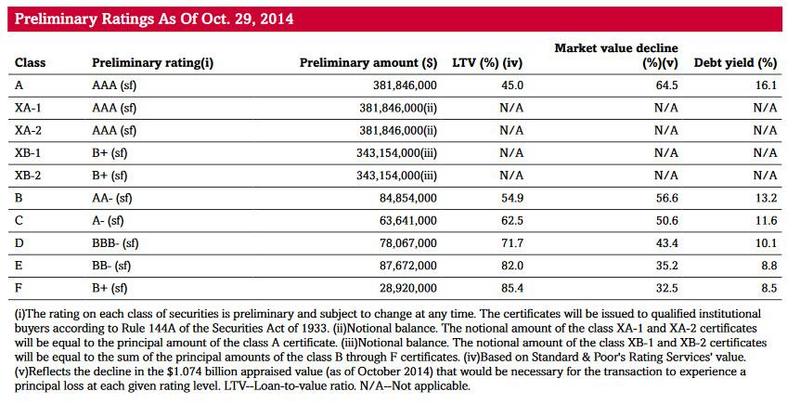 … S&P in July sharply downgraded the entire stack to speculative grade after a reappraisal of the four regional malls backing the debt valued them 66% lower than when the bond was issued. As Bloomberg adds while loan servicer and borrower Wells Fargo hoped to restructure or modify the loan, the pandemic has put those plans on ice for now, according to a commentary by Wells.

Ahead of the ratings bloodbath, Wells began slashing interest payments in June because the sharply lower appraisal triggered a CMBS protection mechanism known as an appraisal reduction amount. With the valuation so much lower, the ARA limits the amount of interest servicers have to advance on loans where the underlying collateral has declined in value. The idea is that the servicer will hold onto funds longer to safeguard senior bondholders, although with no end in sight to the apocalypse in the mall sector it is unclear just what recoveries senior bondholders hope to get.

“Because of the appraisal reduction amount in place, the servicer is only advancing on a portion of the mortgage loan,” said S&P CMBS analyst Dennis Sim.

What is remarkable is that the Starwood loan defaulted last November – before the coronavirus pandemic crippled the retail sector – when the borrower was unable to refinance, but the servicer paid investors out of a dwindling reserve account until June. Wells Fargo is now advancing smaller stopgap payments out of its own pocket.

As a result, the slice of the CMBS originally rated AAA was last quoted around 69 cents on the dollar. This is the tranche that was supposed to be “money good” no matter what. 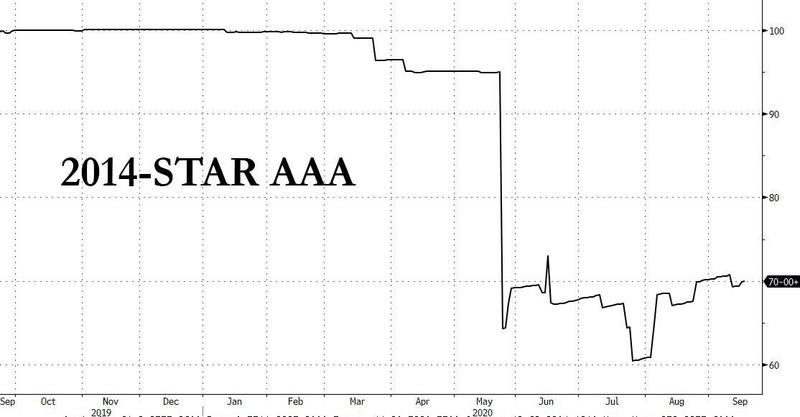 The Starwood CMBS is just one of many that is about to undergo a dramatic default. According to the latest Trepp data, the percentage of overall CMBS loans assumed by special workout servicers continues to surge, rising from 9.49% in July to 10.04% in August. In total, about 17.3% of retail loans were in special servicing in August, up from 16% in July. 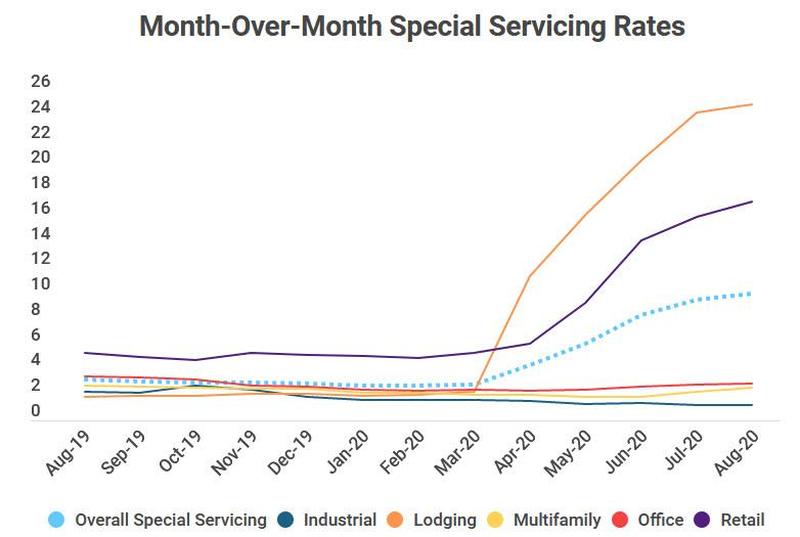 Meanwhile, on the other side of the table, things are getting from bad to worse, as a vast majority of small businesses can no longer afford to pay rent. The situation has been under the radar for the general public for since day one of the pandemic but remains an “enormous problem” for local business owners, says Mary Alice Scott, executive director of the Portland Independent Business and Community Alliance in Maine, quoted by Bloomberg.

How enormous? According to a recent survey by advocacy group Small Business Majority of more than 900 businesses in its network indicated 62% are struggling to make commercial rent or mortgage payments—up 6% from a previous poll released earlier in the month. The group warned a wave of commercial evictions and foreclosures could be on the horizon. A similar survey released in September of more than 5,500 business owners by Alignable, a business referral network, showed 32% will be unable to pay full rent on time in September.

Unfortunately, this means that the carnage in the real economy – not the fake one represented by the Fed manipulated stock market – is only just starting.