One of the core staples of the past 40 years, and an anchor propping up the dollar’s reserve status, was a global financial system based on the petrodollar – this was a world in which oil producers would sell their product to the US (and the rest of the world) for dollars, which they would then recycle the proceeds in dollar-denominated assets and while investing in dollar-denominated markets, explicitly prop up the USD as the world reserve currency, and in the process backstop the standing of the US as the world’s undisputed financial superpower. 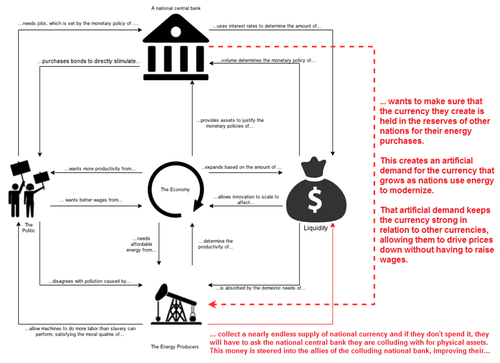 Those days are coming to an end.

END_OF_DOCUMENT_TOKEN_TO_BE_REPLACED

(Listen to the report here)

Russia is continuing to ramp up its efforts to move away from the American dollar (Federal Reserve Notes). The country just shifted $100 billion of its reserves to the yuan, the yen, and the euro in their ongoing effort to ditch the US Dollar.

The Central Bank of Russia has moved further away from its reliance on the United States dollar and has axed its share in the country’s foreign reserves to a historic low, transferring about $100 billion into euro, Japanese yen, and Chinese yuan according to a report by RT. The share of the U.S. dollar in Russia’s international reserves portfolio has dramatically decreased in just three months between March and June 2018. The holding decreased from 43.7 percent to a new low of 21.9 percent, according to the Central Bank’s latest quarterly report, which is issued with a six-month lag.

The money pulled from the dollar reserves was redistributed to increase the share of the euro to 32 percent and the share of Chinese yuan to 14.7 percent. Another 14.7 percent of the portfolio was invested in other currencies, including the British pound (6.3 percent), Japanese yen (4.5 percent), as well as Canadian (2.3 percent) and Australian (1 percent) dollars.

Russian and others have been consistently moving away from the dollar and toward other currencies. Economic sanctions, which are losing their power as more countries move from the dollar, and trade wars seem to be fueling the dollar’s uncertainty.

Peter Schiff warns that as the supply of dollars is going to grow and grow, the demand for the American currency can fall, while the US Fed will be unable to stop the dollar’s demise. Schiff says that what is coming for Americans, is massive inflation.

Russia began its unprecedented dumping of U.S. Treasury bonds in April and May of last year. Russia appears to be moving on from the rise in tensions with the United States. The massive $81 billion spring sell-off coincided with the U.S.’s sanctioning of Russian businessmen, companies, and government officials. But Russia has long had plans to “beat” the U.S. when it comes to sanctions by stockpiling gold.

The Russian central bank’s First Deputy Governor Dmitry Tulin said that Moscow sees the acquisition of gold as a “100-percent guarantee from legal and political risks.”

As reported by RT, the Kremlin has openly stated that American sanctions and pressure are forcing Russia to find alternative settlement currencies to the U.S. dollar to ensure the security of the country’s economy. Other countries, such as China, India, and Iran, are also pursuing steps to challenge the greenback’s dominance in global trade.

Three months ago, in Mid-October, Subhash Chandra Garg, economic affairs secretary at India’s finance ministry, said that India still hasn’t worked out yet a payment system for continued purchases of crude oil from Iran, just before receiving a waiver to continue importing oil from Iran in its capacity as Iran’s second largest oil client after China.

That took place amid reports that India had discussed ditching the U.S. dollar in its trading of oil with Russia, Venezuela, and Iran, instead settling the trade either in Indian rupees or under a barter agreement. One thing was certain: India wanted to keep importing oil from Iran, because Tehran offers generous discounts and incentives for Indian buyers at a time when the Indian government is struggling with higher oil prices and a weakening local currency that additionally weighs on its oil import bill.

Fast forward to the new year when we learn that India has found a solution to the problem, and has begun paying Iran for oil in rupees, a senior bank official said on Tuesday, the first such payments since the United States imposed new sanctions against Tehran in November. An industry source told Reuters that India’s top refiner Indian Oil Corp and Mangalore Refinery & Petrochemicals have made payments for Iranian oil imports.

To be sure, India, the world’s third biggest oil importer, has wanted to continue buying oil from Iran as it offers free shipping and an extended credit period, while Iran will use the rupee funds to mostly pay for imports from India.

“Today we received a good amount from some oil companies,” Charan Singh, executive director at state-owned UCO Bank told Reuters. He did not disclose the names of refiners or how much had been deposited.

Meanwhile, in lieu of transacting in US Dollars, Iran is devising payment mechanisms including barter with trading partners like India, China and Russia following a delay in the setting up of a European Union-led special purpose vehicle to facilitate trade with Tehran, its foreign minister Javad Zarif said earlier on Tuesday.

As Reuters notes, in the previous round of U.S. sanctions, India settled 45% of oil payments in rupees and the remainder in euros but this time it has signed deal with Iran to make all payments in rupees as New Delhi wanted to fix its trade balance with Tehran.  Case in point: Indian imports from Iran totaled about $11 billion between April and November, with oil accounting for about 90 percent.

Singh said Indian refiners had previously made payments to 15 banks, but they will now be making deposits into the accounts of only 9 Iranian lenders as one had since closed and the U.S has imposed secondary sanctions on five others.

It’s all about control… Robert Fripp

The Russian central bank opened its first overseas office in Beijing on March 14, marking a step forward in forging a Beijing-Moscow alliance to bypass the US dollar in the global monetary system, and to phase-in a gold-backed standard of trade.

According to the South China Morning Post the new office was part of agreements made between the two neighbours “to seek stronger economic ties” since the West brought in sanctions against Russia over the Ukraine crisis and the oil-price slump hit the Russian economy.

The new central bank office was opened at a time when Russia is preparing to issue its first federal loan bonds denominated in Chinese yuan. Officials from China’s central bank and financial regulatory commissions attended the ceremony at the Russian embassy in Beijing, which was set up in October 1959 in the heyday of Sino-Soviet relations. Financial regulators from the two countries agreed last May to issue home currency-denominated bonds in each other’s markets, a move that was widely viewed as intended to eventually test the global reserve status of the US dollar.

Speaking on future ties with Russia, Chinese Premier Li Keqiang said in mid-March that Sino-Russian trade ties were affected by falling oil prices, but he added that he saw great potential in cooperation. Vladimir Shapovalov, a senior official at the Russian central bank, said the two central banks were drafting a memorandum of understanding to solve technical issues around China’s gold imports from Russia, and that details would be released soon.

If Russia – the world’s fourth largest gold producer after China, Japan and the US – is indeed set to become a major supplier of gold to China, the probability of a scenario hinted by many over the years, namely that Beijing is preparing to eventually unroll a gold-backed currency, increases by orders of magnitude.

Meanwhile, as the Russian central bank was getting closer to China, China was responding in kind with the establishment of a clearing bank in Moscow for handling transactions in Chinese yuan. The Industrial and Commercial Bank of China (ICBC) officially started operating as a Chinese renminbi clearing bank in Russia on Wednesday this past Wednesday.

“The financial regulatory authorities of China and Russia have signed a series of major agreements, which marks a new level of financial cooperation,” Dmitry Skobelkin, the abovementioned deputy head of the Russian Central Bank, said.

“The launching of renminbi clearing services in Russia will further expand local settlement business and promote financial cooperation between the two countries,” he added according to.

Irina Rogova, a Russian financial analyst told the Russian magazine Expert that the clearing center could become a large financial hub for countries in the Eurasian Economic Union.

Bypassing the US dollar appears to be paying off: according to the Chinese State Administration of Taxation, trade turnover between China and Russia increased by 34% in January, in annual terms. Bilateral trade in January 2017 amounted to $6.55 billion. China’s exports to Russia grew 29.5% reaching $3.41 billion, while imports from Russia increased by 39.3%, to $3.14 billion. Just as many suspected, with Russian sanctions forcing Moscow to find other trading partners, chief among which China, this is precisely what has happened.

The creation of the clearing center enables the two countries to further increase bilateral trade and investment while decreasing their dependence on the US dollar. It will create a pool of yuan liquidity in Russia that enables transactions for trade and financial operations to run smoothly.

In expanding the use of national currencies for transactions, it could also potentially reduce the volatility of yuan and ruble exchange rates. The clearing center is one of a range of measures the People’s Bank of China and the Russian Central Bank have been looking at to deepen their co-operation, Sputnik reported.

One of the most significant measures under consideration is the previously reported push for joint organization of trade in gold. In recent years, China and Russia have been the world’s most active buyers of the precious metal. On a visit to China last year, the deputy head of the Russian Central Bank Sergey Shvetsov said that the two countries want to facilitate more transactions in gold between the two countries.

“We discussed the question of trade in gold. BRICS countries are large economies with large reserves of gold and an impressive volume of production and consumption of this precious metal. In China, the gold trade is conducted in Shanghai, in Russia it is in Moscow. Our idea is to create a link between the two cities in order to increase trade between the two markets,” First Deputy Governor of the Russian Central Bank Sergey Shvetsov told Russia’s TASS news agency.

In other words, China and Russia are shifting away from dollar-based trade, to commerce which will eventually be backstopped by gold, or what is gradually emerging as an Eastern gold standard, one shared between Russia and China, and which may day backstop their respective currencies.

Meanwhile, the price of gold continues to reflect none of these potentially tectonic strategic shifts, just as China – which has been the biggest accumulator of gold in recent years – likes it.